Scent and the Spirit: Fragrance in Zoroastrian and Jewish Traditions 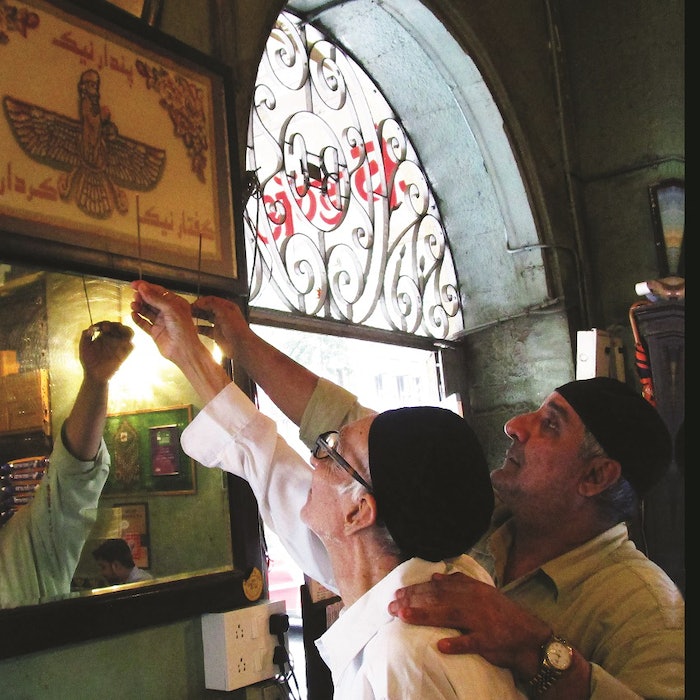 The marriage of scent and spirit is as old as time, both undying in their fidelity to the wow of spiritual exhilaration. Without scent, the spirit is desolate and sans color, and without the spirit, the magic of scent would have never been recognized.

Unanimously considered by sages and seers as the worshipper’s ally, fragrance is central to many religious and spiritual traditions of the world. Among the most ancient ones are two great faiths: Zoroastrianism and Judaism. Both view the sublime gift of fragrance as an aid to worship, while expressing fragrance in their very unique ways.

One of the world’s earliest religions, from modern-day Iran, is called Zoroastrianism. Founded by the legendary Prophet Zarathushtra, or “Asho Zarathushtra” (Zarathushtra the Righteous), he is known to the west as “Zoroaster,” and regarded as one of history’s earliest prophets.

Zoroastrianism is pillared by its scared scripture, the “Zend Avesta” revealed by “Ahura Mazda” (the Wise Lord) to Zarathushtra. The faith is also comprised of other classical texts.

Although the scriptures are very vast, the teachings are simple and touching. Zoroastrianism is pivoted mainly on three principles: “Humt,” “Hukht,” and “Hvaresht,” which simply translate as “good thoughts,” “good words” and “good deeds”—the pillars of “Asha,” or righteousness.

"Both ancient faiths embody universal, core principles like devotion, compassion and righteousness; fragrance acts as the sublime mirror, reflecting these principles during acts of worship."

Zoroastrianism’s fundamental prayer is “Ashem vohu vahishtem asti. Ushta asti ushta ahmai hyat ashai vahishtai ashem” (“Righteousness is the best good, and is happiness. Happy is the man who is an embodiment of perfect righteousness”). Zoroastrian worship takes place in holy fire temples with sacred fires consecrated on various levels. Fire in Zoroastrianism symbolizes divine light and is central to Zoroastrian worship. Similar to the Vedic “Havan” ritual, Zoroastrian religious ceremonies are conducted before a fire. The “Faravar,” or “Farovahar,” is the symbol of the Zoroastrian faith, symbolizing good thoughts, words and deeds.

Ancient Persia was ruled by several towering Zoroastrian monarchs over many glorious dynasties until the Arabs invaded, resulting in the spread of Islam. A large number of Zoroastrians, or “Mazdeyasno Zarthushtis,” fled their ancient motherland over a thousand years ago to escape the barbaric invasion, and sought refuge in the coastal town of Sanjan in the western Indian state of Gujarat, bringing with them their most holy “Fire of Victory,” or “Atash Behraam.” This later established one of the most important places of worship—the revered “Iran Shah Atash Behraam” fire temple in the town of Udvada in the same region.

Members of this particular Zorastrian community came to be called “Parsi,” one of India’s greatest minorities who blended with its cultural mosaic and contributed immensely to its heritage. Some members of a minority group of Zoroastrians, “Irani Zarthushtis,” continued living in Islamic Iran and later immigrated to India over a century ago. Although their native tongue was modern Persian as compared to Gujarati of the Parsis, they blended well with the former.

Zoroastrian rituals are complex and very ancient. Inside fire temples, broadly termed “Agiyaari” in Gujarati, priests conduct prayer ceremonies before the sacred fire, or “Atash,” in which a major offering is sandalwood, or “chandan,” a practice similar to the Vedic Havan ceremony.

India is renowned for high-quality sandalwood, which grows primarily in the south. Sandalwood has been considered healing, calming and spiritually inspiring right from the Vedic era. Members of the faith often buy sandalwood sticks from religious shops outside fire temples and offer them to the sacred fire. “Sandalwood is horrendously expensive. Since not everyone can afford it, we even offer a less fragrant, affordable wood called ‘sukhad,’” explained Rohinton Mehta, owner of a quaint Parsi shop outside Mumbai’s towering Anjuman Na Atash Behram fire temple.

According to the senior Parsi, pure agarwood or oud sheets were offered to the holy fire at Iran Shah once upon a time. “The whole town would be enveloped by its fragrance! Today, oud is insanely exorbitant and this practice would be unimaginable!” he reminisced.

The second most important fragrant ingredient in Zoroastrian worship is “loban” resin. In elaborate domestic prayer rituals like “Jashn,” or even during daily prayers, loban is burnt over charcoal in a metal urn-like incense burner called “Afarganiyu” in Gujarati.

The charcoal is first lit and the loban, which is either powdered or granulated, is sprinkled on the charcoal and large amounts of smoke rise from it to spread the highly soothing and blissful aromas. Early morning and evening household prayers begin with ablutions. The ritual involves re-tying the “Kasti” (the sacred thread worn around the waist), lighting the “divo” lamp and reciting prayers. Next, the “loban feravvu” ritual, where the user travels throughout the home with the afarganiyu, spread the fragrant smoke. The worshipper takes the afarganiyu while wearing a traditional skull cap or a kerchief to cover the head, recites the “Ashem Vohu” prayer. Physical purity is essential to this ceremony and women during menses are forbidden from touching loban or other prayer items.

“There is something magical and pure about the fragrance of loban. It is not only the symbol of our faith, but also spiritually transforms our state of mind instantly, inspiring good thoughts, words and deeds,” said Aqa Boman Kohinoor, the 95-year-old living legend of the Irani Zarthushti community of Mumbai. Loban is considered highly purifying and eliminates negative energy from the surroundings and is used as a disinfectant. While quality loban is said to be imported from Singapore, Zoroastrians also use incense sticks or “agarbatti” for prayer rituals.

“Everything in the universe is shouting ‘recognize my creator!’” gushed Sharon Binyamin Galsurkar, India’s venerated Jewish educator. He believes that the five senses are channels through which we can realize divine beauty—fragrance being one of the greatest. Galsurkar believes that fragrance is one of the major aids in worship and mediums of spiritual connection. “Fragrance gladdens the heart and helps you to connect to Almighty,” he added, taking inspiration from traditional Jewish wisdom.

Scent and the Scriptures

One can find innumerable references to incense, or “Ketoret,” in the Old Testament. Several chapters include the Psalms of David talking of incense offerings to “Hashem,” or God. Incense has great spiritual significance in Judaism, and is even likened to prayer. “Let my prayers be set forth as incense before thee.” Psalm 141:2.

The powdered or granulated loban resin (pictured) is sprinkled on the charcoal to be used during ablutions.

To cite a few examples, in Exodus 30:34, God asks Moses to take fragrant materials such as sweet spices, galbanum, frankincense, onycha and balsam of equal weight to make incense out of them. Exodus 30:7 tells the story of Aaron burning incense of sweet spices every morning “when he dresseth the lamps.” Ketoret finds unique importance in the Jewish scriptures and classical writings.

The “Mizbayakh Ha Ketoret” is the legendary golden altar on which incense was offered in the temples. It is said that there were certain families that were masters at making the incense for the temple. The secret formulas of those incenses were known to them alone to preserve the sanctity of the practice. “A traditional Jew would never imagine trying to blend those incenses even if parts of those formula were to be known today. There are laws that forbid us from doing so,” said Galsurkar.

Shabbat, specifically Friday sunset to Saturday sunset, is the holy period of the week and day of rest for the Jews. Galsurkar explained that a certain pure spirit, or “ru’aah,” enters a worshipper during the commencement of Shabbat to create a spiritually elevated atmosphere, and departs after its conclusion resulting in a general feeling of depression. As a part of the “Havdalla” ceremony on the conclusion of Shabbat—which includes prayer, wine or grape juice, light and fragrance—many Jews use spices to rev up the spirit like Galsurkar himself does, considering that spices have anti-depressant properties.

Certain North African Jewish communities also distribute spicy natural substances during prayers to bring joy to the heart, or “Simkha” in Hebrew. Natural fragrances are preferred to synthetic ones as it is perceived to create a purer experience.

A unique practice in Judaism involves the recitation of blessings over fragrances, especially during the Havdalla ceremony. There are special blessings over flowers, herbs, spices and fruits.

“Barukh ata Adonoy Eloheinu melekh ha olam, borei minei vishamim” (“Blessed are you oh God, king of the universe, who creates spices of fragrance”) is a blessing over spices and over miscellaneous fragrances.

Known to evoke spiritual qualities and feelings and reminding mankind of its creator, fragrance in Jewish wisdom can be summed up with the words of the Talmud: “What is it that provides enjoyment for the soul and not for the body? Fragrance!”

Both ancient faiths embody universal, core principles like devotion, compassion and righteousness; fragrance acts as the sublime mirror, reflecting these principles during acts of worship, and reminding the worshippers of their presence within—bringing them closer to their divine source.

Like it is with light, sound and color, there is the inexplicable mysticism about fragrance. Whether it is the deeply calming and meditative loban that envelopes Zoroastrian homes at sunset, or the tangy and tantalizing aroma of spice blends that enliven the devout Jew at the end of every Shabbat, fragrances are an extension of the soul, reaching out to its creator through each rising whiff.

*All photos courtesy of the author.