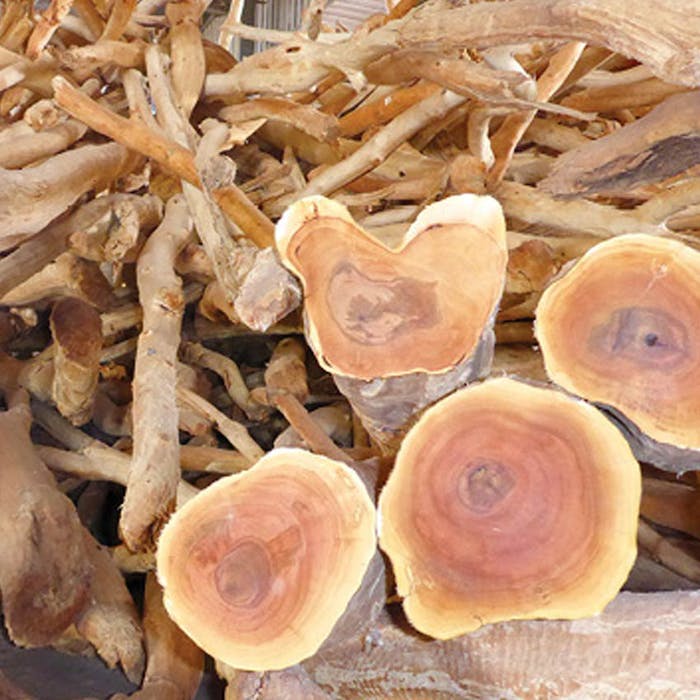 Steven Orson, senior perfumer, Bell Flavors & Fragrances, agreed, “There are aroma molecules that can create a sandalwood effect and you can achieve success, but Indian sandalwood is incomparable. There is nothing else like it. Nothing replaces it.”

In perfumery, Indian sandalwood (Santalum album) is the more coveted of the two species for fine fragrance formulation. Santalum album oil contains higher levels of Beta santalols, the active ingredient that gives it its signature scent, compared to Santalum spicatum.

Known for its precious oil, Indian sandalwood (Santalum album) is derived from the heartwood. Classified as woody or oriental, Indian sandalwood is valued for its distinct olfactive properties, which are often described as creamy, milky, sweet, warm, soft and rich. Commonly used as a base note, it is a natural fixative and has an inherent capacity to enhance other perfume ingredients. Indian sandalwood adds warmth, depth and character to fragrances.

“As a young perfumer, I remember having Indian sandalwood in my kit. It was fabulous. The dry down was super rich and creamy. It was very voluptuous!” said Arienti. Similarly, Claisse recalls as a perfumer starting in the industry, “Indian sandalwood was a staple in my perfumer palette and formulations. We were able to use a lot of it.”

“It has a luxurious, creamy effect and has the most refined character compared to other woody essential oils such as patchouli and cedar, which are harsher and earthier. Indian sandalwood is smoother and has a very linear profile; it’s an extremely consistent material. In a formula it has a tendency to round out a fragrance and meld other materials together. It adds a lovely, sensual effect on the skin,” said Claisse.

Likewise, Orson noted, “Indian sandalwood is the preferred sandalwood in all classic perfumery. It was a commonly used ingredient in fine fragrance and toiletries, very much like cedarwood is now. Indian sandalwood has a certain creaminess; it’s smooth and milky. It also has a synergistic effect that helps smooth out other woods in a formula. It has a superior substantivity, it’s very long lasting on the skin.”

Several recent fragrance introductions have been inspired by or are based on Indian sandalwood. Alexander Vreeland created a line of five fragrances in tribute to his late grandmother Diana Vreeland, the well-known editor of Harper’s Bazaar and Vogue. Absolutely Vital is one of the five perfumes and was designed for Vreeland’s “love for India and passion for sandalwood.” The fragrance is self described as “a mysterious and enveloping woody composition of Indian sandalwood.” In 2014, Crabtree & Evelyn repackaged, reformulated and relaunched its 2004 men’s Sandalwood scent.

The company also changed the name to Indian Sandalwood. Maison Francis Kurkdjian’s Aqua Vitae Forte launched in June 2015 and is a woody, citrus floral with a foundation of East Indian sandalwood and Haitian vetiver. As a part of the Asian Tales fragrance collection by niche perfumer Kilian Hennessy, Sacred Wood is an ode to Indian sandalwood because it “has been exploited excessively and its existence is vulnerable.” Kilian created this scent because he “wanted to restore the essence of this fragrance [Santalum album] that has an important imprint in our olfactory heritage.” Indian sandalwood continues to be an important inspiration and ingredient story in perfumery. In January 2016, Jo Malone launched Orris & Sandalwood, a new unisex fragrance in the Cologne Intense Collection.

Native to India, Santalum album has been said to date back to 4,000 years. Historically, Santalum album has been harvested from wild forests growing primarily in the southern part of India in the Bangalore area. It is one of the most expensive woods in the world and is heavily rooted in Indian culture. Driven by the scarcity of Santalum album, trees are being illegally cut down, often leading to violent criminal acts. The high demand for Santalum album oil and the supply shortage has resulted in adulterated oil and an increased cost.

Claisse stated, “Like other naturals because of scarcity, price and regulatory issues, Indian sandalwood has been slowly phased out of our perfumer’s palette and is rarely seen in commercial products today.”

“As a perfumer for over forty years, I remember Indian sandalwood was a fundamental ingredient in my fine fragrance formulas. Then in the 80s the use of sandalwood was being diminished and shrinking from our palette because there were less expensive aroma chemicals that loosely imitated the sandalwood effect,” said Orson.

Perfumer Cecile Hua of MANE, said “Unfortunately, when I started my career as a perfumer, natural sandalwood was already very limited, so I did not get much time to learn to play with it and I had to learn to formulate with synthetics quickly.”

Christie sympathized, “I would like to use Indian sandalwood because it imparts a traditional, historic and classic feeling, but I rarely have the opportunity to formulate with it.” The Indian government has attempted to regulate and avoid the deforestation of Santalum album, but unfortunately, this royal tree has been overharvested. In 2012 the Santalum album tree was added to the Red List of Threatened Species by the International Union for Conservation of Nature and Natural Resources.

A Return of Indian Sandalwood to the Perfumer’s Palette

Within the fragrance and flavor industry, ingredients are continually becoming more and more regulated, challenging perfumers to work with a limited palette of materials. Even though many naturals are no longer available or too expensive to use, consumers’ interest in natural and sustainable ingredients is evident and shows no signs of waning.

“Our customers are requesting sustainable, eco-conscious naturals to be used in formulas. This trend is becoming more important and apparent in the marketplace,” said Claisse. Given the opportunity and if affordable, perfumers are excited to welcome natural and sustainable Indian sandalwood to their dwindling palettes.

“I want to support ethical and sustainable practices, and would be willing to use raw materials that fall under these categories. As a professional perfumer, I need to make sure that the source is reliable, in terms of consistency and volume. Luckily, with the rise of the niche market and the remarkable effort of specialty retail in investing in the juice, expense is less of a concern than volume and stability, creating opportunities for new natural materials. The magic and beauty of perfumery is with every new ingredient you get to play with, you discover and learn new tricks!” said Hua.

Christie agreed, “If I had the opportunity to access natural, sustainable and ethical Indian sandalwood, I would definitely dive into it.” Orson concluded, “If ethical and sustainable Indian sandalwood was available, of course I would want to use it. However, the market is competitive and the choice of ingredients one selects for a formula is price driven. I anticipate a premium product and for this reason I see an opportunity for the return of Indian sandalwood predominantly in fine fragrance and higher-end products.”