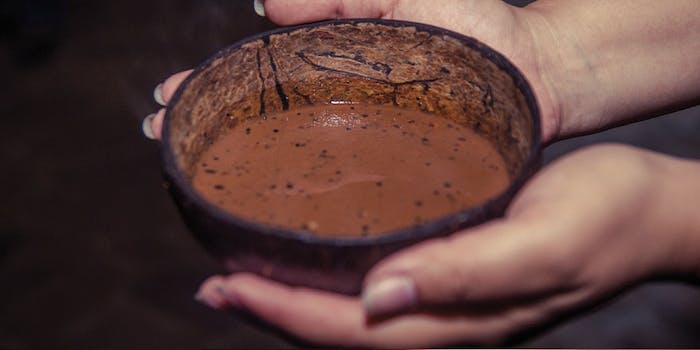 “Happiness. Simple as a glass of chocolate or tortuous as the heart. Bitter. Sweet. Alive.”
— Joanne Harris, Chocolat

There is one element in this world that is as sacred as it is seductive; emotionally penetrating to our collective culinary and olfactive culture. There is one element that has ridden the centuries, held us in its delicious thrall, and has been elevated to the highest of art forms by renown artisans. It has inspired literature, cinema, art, and has been clutched, sticky and melting in the hands of children and adults the world over. Its scent is recognizable, comforting, alluring… This is chocolate.

The history of chocolate is a long one: three thousand years of the cocoa bean winding its aromatic way through ritualistic practice, cultural and culinary inspiration and economic importance. There is anthropological evidence of chocolate being produced by the pre-Olmenic cultures in present-day Mexico as early as 1900 BC.1 The Olmenic fermented, roasted and crushed the cocoa beans into a paste mixed with water, vanilla, dried flowers and spices such as allspice and chili peppers. This drink, Xocoatl, was sacred. Reserved for leaders, nobles, warriors and priests, Xocoatl was believed to be an invigorating aphrodisiac. In the later Mayan and Aztec cultures, the cacao was known to be used in porridge and drinks with the addition of cornmeal, chili, honey, annatto, allspice and dried flowers.2 The cocoa bean and its preparation took on great spiritual meaning linking it to life and death, as the cacao tree was believed to grow from the reincarnated body of Centeotl, the Maize God, after he buried himself beneath the ground in order to invigorate the land with life-giving plants.

In the 300 BCE Mayan text Popol Vuh, the maize tree was depicted as both above and below the ground, blossoming with divine fruit of cacao pods, representing its link to both life and death.

In this modern world, it is hard to connect chocolate with the sacred. We speak of “food of the gods,” as “Oh my God, or “This is divine!” when something tastes marvelous; yet, in an era where wrapped boxes filled with chocolate confections fill aisles of drug stores, and many commercial chocolate bars produced in industrial factories have only 11 % cacao, it is easy to lose site of chocolate’s sacred symbology. The cocoa tree and its beans were regarded as a living, breathing entity. A substance to not only gratify hunger, but linked as well to sexuality, life and death. Cacao, along with maize, was seen as the life force within the ancient cultures, and as such, every drop taken was a ritualistic act in itself.

“Both the Mayans and Aztecs believed the cacao bean had magical, or even divine, properties, suitable for use in the most sacred rituals of birth, marriage and death. According to Chloe Doutre-Roussel’s book The Chocolate Connoisseur, Aztec sacrifice victims who felt too melancholy to join in ritual dancing before their death were often given a gourd of chocolate (tinged with the blood of previous victims) to cheer them up.”4

There are those who find the sacred still. There are chocolatiers who harness its form into fantastic shapes and flavors; who, in their artistry, may bring us back to the spiritual – each bite an act of devotion and a recognition of something divine.

Art in Each Bite: Chocolatiers and Their Craft

Modern chocolatier, Black Chocolate Co. in Manchester, UK’s haunting confections are the closest this writer has come to finding ritual-inspired chocolate. The life size, anatomically correct chocolate skulls ride into the realm of fine art in their mastery, and their Chili Chocolate Skull resonates with the Mayan tradition of chocolate and spice. Black Chocolate Co. skulls are fetishized in their form and function. They are wholly edible, but beautifully realistic enough to worship.

The pathway from ritualized chocolate to the ubiquitous bon-bon was paved throughout history one cocoa bean at a time – literally, as beans were used as currency in the Mayan civilization, where the they were traded for food and clothes.

The Conquistadores tasted the chocolate beverages in the 1600’s in Mexico and soon began exporting the cacao beans to Spain. The 1700’s heralded a new era of chocolate throughout Italy and France, where it continued to be enjoyed as a drink, usually in its bitter form, though at times with the addition of sugar, as well as formed into small solid disks.5 It was at this time that chocolate became used in desserts, but not until the following century did the world get the candy bars we know today: sweetened, smooth, and undeniably a force in the culinary zeitgeist of the time.

It is with this incredible history in mind that I find myself walking down a small cobblestone street in Rome, the buildings and their forgotten alter niches laden with night blooming jasmine, in search of illuminated windows. The display is caught forever in the 1920’s. Heavy curtain, trays of bon-bons, impossibly delicate chocolate cups filled with crème fondant, chocolate cherubs alight on classically ribbon tied candy boxes, and I am drawn into the past, and the persevered “art of chocolate” of Valzani Patisserie. As in all chocolate shops, it is the aroma that affects me first. Chocolate, melting butter, the scent of crumbling cookies – the dark chocolate splitting their delicate centers, and puff pastry stuffed in a cloud of ganache. At Valzani, rows and rows of chocolates in the glass case are lit in the wan yellow light with a backdrop of photographs and hand-written signs creating a mosaic from floor to ceiling on every wall. The chocolate is combined with a lingering scent of liquor as well as a curious scent of crumbling stone dust that is the aromatic tell of Rome’s Medieval quarter of Trastevere.

Marron, Diavollitti, Cioccolato All’arancia, and Tartufi Latte stand out as the most decadent and refined of the chocolates. Marron is a dark chocolate hard shell divided in the center, each side filled with chestnut crème. The balance of crème to hard texture, bitter to sweet, and nutty-chocolate aroma add an elegant complexity to the candy. Diavollitti is a masterful ganache filled with ground pepperoncino, a diabolically strong pepper used to add fire to pasta dishes throughout the region. The Cioccolato All’Arancia is a divine brick of dark chocolate fondant filled with tender pieces of sugared orange rind; the aroma of chocolate and orange is truly inspired. Tartufi Latte, a take on famous Italian truffles snuffled up by pigs in the Tuscany region, are round balls of complete joy. The liquor-infused chocolate cake dipped in milk chocolate puts the American Cake Pop trend to shame.

At Valzani, I am time traveling fast to my mother, Sheilagh Karl’s kitchen, my child self, leaning over a large pot of melting bitter chocolate and butter being prepared for her famous brownies. The scent that rose in captivating waves always made me think of her blue velvet robe: deep, rich, dark and enveloping. A chef and later a chocolatier, my mother and her chocolate partner, Chef Sam Jacobson, would create magnificent truffles which they would sell in white cake boxes tied with flowing satin ribbons at Henri Bendel. Composing her creations as a perfumer creates a scent, my mother was famous for infusing handmade liquors and pureed fruits into the ganache and coating them with an array of chocolates decorated with splashes of edible gold, beads of silvered sugar, and with a practiced flick of the wrist, a Pollock-like splatter of white chocolate. Recipes, handwritten on yellow paper were taped in her “chocolate book:” a grimoire of chocolate spells, filled with words like “coffee- infused marzipan,” “balsamic-fig-reduction-ganache,” “hazelnut-vanilla liquor” (which she would place behind our ears as a mid-day fragrance), “white chocolate-orange blossom-mango fondant”... the magical list goes on.

And while Valzani is nestled in a small street in Rome, and my mother’s chocolate studio was in our house in Philadelphia, there was a “simpatico” between the two. A nod to tradition married to a love of fun, exploration and the art of decoration.

A similar chocolate joie de vivre can be found in NYC’s East Village gem, Chocolate Obsessive Disorder, created by innovative chocolatier, Sebastian Brecht. Brecht really embraces the “art” in artisanal and creates visually arresting and aromatically complex-tasting chocolates that could as easily be hanging in a gallery as gracing his minimal shelving. The elegant World-Origin Bar-Japan is a veritable woodcut in chocolate. Japan’s matcha white chocolate and dehydrated raspberries are a feast for the eyes, nose and mouth; natural colors staining the white chocolate like a delicate silk printed Kimono. The playful Area 51 Bar is Brecht’s hilarious spaceship-molded dark chocolate shell filled with potato chips, salted pretzels, rice crispy treats and caramel popcorn, the spaceship’s cockpit filled with a delectable caramel, reminding me of Ray Bradbury tales and childhood daydreams of Martians in deep space. 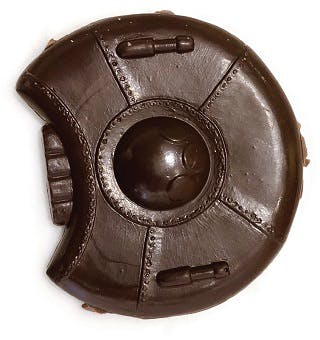 The menu changes seasonally and at the whim of the inspired chocolatier, whose imagination is matched with his refined pallet. Wandering in on a recent summer day, I found a rose tea-pistachio candy that is a veritable china printed tea set. Aromatic rose-tea-infused ganache is paired with the delicate crunch of pistachio and printed with a miniature tea rose. I am once again a child, small tea set in hand, surrounded by stuffed animals, piles of chocolate and cookies. And while Brecht’s delicacies catapult this writer into childhood reminiscence, they are far from childish. The Chocolate Shot, for example, echo’s mad clubbing nights in the East Village. One must bite the top off of the chocolate shell to then do a shot of boozy crème caramel, and then finish off the chocolate “shot glass,” of course. The Honey Truffle hugs one in honey infused ganache, the bitter finish of the cocoa reminding me of the leather-bound books in my family’s library. The dark honey is a subtle sweetness winding through quickly, then disappearing in a soft sillage. I feel perfumed and sensual under this truffle’s spell.

Brecht’s shop is as much of a community as it is a place to indulge one’s love for chocolate. One enlightened young visitor spoke to me of how he spends as much time there as possible, at times wrapping caramels, sometimes arranging boxes, or happily, being a taster. Chocolate to him is “innocence. Pure joy to smell and taste.” I couldn’t agree more.

The Many Faces of Chocolate

Chocolate is complex. It shifts with us into adulthood with its seduction and lure. We talk of it in terms of desire, love, sensuality until it becomes a thing of poetry. Chocolate has many faces. It is a big bunny, foil wrapped in a window-the harbinger of spring. It is a cup of steaming chocolate with lumps of melting marshmallow after sledding in the winter. It is seduction in a blend of aroma and taste that is near obsessional. It is art, in its ability to be molded, wielded and harnessed into great sculptural works. It is imagination; rivers of sweet chocolate and golden tickets speaking of childhood innocence and joy. It is memory too, in its way of bringing us back to wrapped foil bars held grasped in our hands as children – culinary security blankets that one can taste with wide-eyed wonder as we discover the secret centers filled with cremes and caramels and fruits filled as they are with gifts of the chocolatier’s imaginations.