Royalty and Fragrances Part 2: The Scent of Versailles 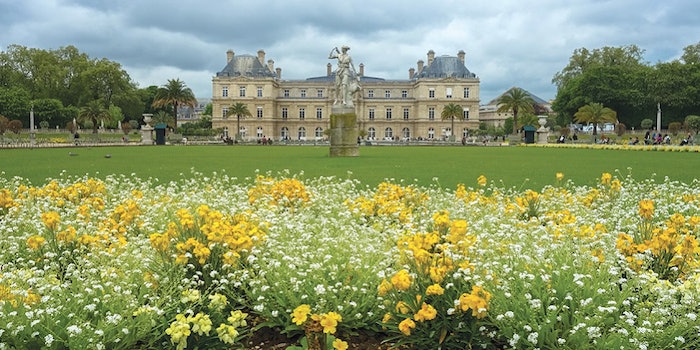 Versailles was a practice in social ritual, royal etiquette and unrelenting opulence. It also happened to stink like an outhouse.

“Her aspirations were lofty, she loved everything sublime.” 1
–Madame Campan, first lady in waiting to the queen.

Marie Antoinette the teen queen, was pampered, powdered, perfumed and poufed to royal heights. Versailles was a practice in social ritual, royal etiquette and unrelenting opulence. It also happened to stink like an outhouse.

All the decadent, gilded, satin-draped, velvet covered, mirrored and bejeweled refinement of Versailles could not stave off the stench. The queen’s chambers were plagued with the smell of human waste, as the cistern was located directly below the palace foundation. While she and the king had running water, a lieux a l’anglaise, and a piping system set in their chambers which supplanted the chamber pot, the rest of the palace did not. Though there were a few public loos below stairwells here and there, there were far too few to keep the foul aroma at bay. More often, courtiers would to lift their dresses or drop their drawers in palace hallways to do their business, or urinate on walls, tapestries, and even over chapel balconies. Eventually, the mess would be cleaned by chambermaids. In addition, offal from palace kitchens would be tossed carelessly from kitchen doors, and chamber pots emptied from palace windows.

The Art of Masking

One must imagine the absolute contrast of luxury and smell. Body odor mingled with the yearly cleaned cess pits, so perfume was a necessity. Marie Antoinette ordered orange blossom and lavender vinegars placed throughout her chambers and the palace hallways to battle the stink. In addition, the Queen and her court would carry small lavender vinegars with them in the same mode as a snuff box; to protect from dismaying odors or revive one from overexcitement.

Thanks to the decadent tastes of Marie Antoinette and the creations of her trusted perfumer, Jean-Louis Fargeon, perfume saturated everyone and everything in Versailles.

Perfume was used to mask the stench, but it was also an emblem of opulence and good taste. It was the elixir of the court – the element which offered elegance and olfactory refinement, the possession of which separated courtiers from the masses. The more precious the oils, the richer one was. The courtiers had a passion for perfuming, encouraged no doubt, by the queen’s own fragrance obsession; earning the nickname “The Court of Perfume.”

Thanks to the decadent tastes of Marie Antoinette and the creations of her trusted perfumer, Jean-Louis Fargeon, perfume saturated everyone and everything in Versailles. Walls, pillows, tapestries, gowns, fans, gloves, garters and wigs were heavily perfumed or powdered. Scented vinegars, artfully placed bouquets, ceramic bowls holding flower essences, and potpourri would be set about the public rooms.

Marie Antoinette was a well-scrubbed Austrian princess upon her arrival at Versailles, as was the tradition in her country. She was as devoted to cleanliness during her reign as French queen, though members of the court were not as enthusiastic about partaking in a daily dunk. Bathing the face daily and perhaps a foot bath was readily accepted, though when it came to full submersion, monthly or even yearly baths were deemed safer for the body. It was believed the humors within would escape with the heat, and leave the one open to illness. We know from the memoirs of the queen’s lady-in waiting Madame Campan, that Marie Antoinette enjoyed a perfumed bath rolled into her chambers, scented with lavender and lemon essence, and filled with sachets of rose and bran for her to sit upon. She was fully dressed in a cotton bathing shift, contrary to popular incendiary rumors that she was a harlot who bathed nude.

“A slipper bath was rolled into her room, and her bathers brought everything that was necessary for the bath. The queen bathed in a large gown of English flannel buttoned down to the bottom; its sleeves throughout, as well as the collar, were lined with linen. When she came out of the bath the first woman held up a cloth to conceal her entirely from the sight of her women, and then threw it over her shoulders. The bathers wrapped her in it and dried her completely.” 2

In her book The Scented Palace, Elisabeth de Feydeau regales us with descriptions of bathing oils, sachets and soaps created in Fargeon’s boutique for the queen and her courtiers, and offers a look at the rather laborious preparations expected of the queen. After the bath, the queen would begin her toilet, a “masterpiece of etiquette.” It was a public display for her preparations of cosmetic, dress and hair. Here she would have a circle of courtiers surrounding her in sofas, including the royal princes and King Louis XVI’s brothers. Much to the chagrin of the nobles present, the queen insisted upon having her beloved hairdresser Leonard, who usurped the royal hairdresser with his needed skill, and her royal milliner-cum-fashion designer, the famed Rose Bertin attend the toilet. Leonard introduced the sky-high Pouf Sentimental: a wig intertwined with one’s own hair and yards of gauze, styled with pomade of orange blossom or lavender, and then set with a base of powdered cypress blended with orris or lavender powder. Within the architectural wonder that was the pouf, one could find ribbons, feathers and flowers kept fresh by cleverly hidden water vases; fruits and vegetables, stuffed birds, dolls, letters and trinkets, and even a model navel boat. Some poufs composed scenes relaying stories, landscapes and historical events, while others narrated goings-on within the court itself. 3

“Fashion continues its fluctuating progress: and head-dresses, with their superstructures of gauze, flowers and feathers, became so lofty that the women could not find carriages high enough to admit them: and they were often seen either stooping or holding their heads out of the windows,” 4 noted Madame Campan.

At court, porcelain white was de rigueur for the complexion. A diluted lead-based paste would be applied to the skin, then a heavy application of orris powder, followed by a touch of blue paint running along the veins of the temple. Carmine red or toxic vermillion rouge would be painted in circular patterns over the cheeks, and a scented pomade dabbed on the lips.

No toilet was complete without perfume. As Feydeau recounts, Fargeon offered his perfumes in wax-based pomades (unguents), or small porcelain bottles with varying motifs. Mythological scenes, paintings and gilt-lettered phrases adorned these precious vessels, which were passed around as love notes or gifts. The perfumes were the result of a laborious enfleurage or distillation process, and were variations on notes such as violet, orange blossom, rose, iris, lily, tuberose, jonquil, citrus, cypress, oak moss, ambergris, bergamot, jasmine and amber. The heady perfume would scent body, dress and accoutrements, including perfumed gloves. These were presented by Fargeon to the queen wrapped in scented taffeta and nestled in boxes filled with roses and nutmeg. She ordered no less then eighteen pairs of perfumed gloves a month.5 The more masculine scents were compositions of amber, cypress and lavender, and were known to be a favorite of magistrates who wore, “enough musk to pass for weasels.” 6

“Our courtiers of the olden times used to ruin themselves: but at least they derived some enjoyment from the process.” 7 - Léonard: Hairdresser to Queen Marie-Antoinette

Marie Antoinette set the pace for the furious chase of beauty. She changed gowns and perfumes more than once day, and many courtiers went into debt trying to keep up with the fickle fashionista. It was not until the birth of her children and king’s gift of the petit palace, Trianon, that the queen’s taste altered; and she replaced her sumptuous silk gowns and towering wigs with white linen, muslin and soft ringlets. She played the milkmaid at Trianon, donning simple shifts and straw hats to tend well-coiffed cows and immaculately designed fragrant gardens. Picnics were taken dans l’herb, and weaving and embroidery in the gardens. The royal shepherdess desired, “nothing but flowers, landscapes and paintings by Watteau.”8 Trianon was her rustic retreat from the pressure of a very public court, and rising resentment of the common people.

Flowers such as Persian iris, tuberose, rose, lily, narcissus, hyacinth, and carnations perfumed the Trianon gardens along with blossoming orange trees, the eau d’orange used by the queen to calm her nerves. Floral notes would mingle with the scent of grass and hay, creating a true escape from court life in a delusional, well-manicured pastoral world of the queen’s own creation.

“…Copses fragrant with lilac, populated with nightingales, were utterly delightful…the air was full of a balmy fragrance…ruins, winding paths, expanses of water, waterfalls, mountains, temples, statues, in short everything to make the gardens varied and so pleasant.” 9

At Trianon, Marie Antoinette had Fargeon create a fragrance that would capture the calm pastoral quality of the place, along with a scent for her lover, Axel de Fersen. It was revealed they penned love letters to each other in invisible ink and code names. Scented, one must suppose:

“I live and exist only to love you – adoring you is my only consolation” -Axel de Ferson.

“My God, how cruel it is to be so near and not be able to see each other!” Marie Antoinette. 10

Fedeau explains that Fargeon, inspired by musical compositions of Gluck, and the queen’s love of music, created the fragrance called, Trianon, a harmonious play of light and dark notes. Rose absolute, orange blossom, along with esprit de fleurs d’ orange, lavender, citron and bergamot, which added a bright citrus to the floral. Sensual tuberose, violet scented iris, and green notes of iris leaves blended with head spinning jonquil, and the three “White Queens of the Night”—jasmine, lily, and tuberose—all softened by vanilla, and completed with amber, musk, cedar, benzoin and sandal. The secret fragrance for de Ferson was simply composed of bergamot, jasmine, oak moss and leather. 11

Antoinette’s perfumer was dismayed when years later during her swift fall out of favor, the precious Trianon perfume soured on the Queen’s skin. It is important to recollect not only the sumptuousness of the Versailles and folly of Trianon, but the resentment harbored by the people against the reigning king and queen. After the revolution and death of the monarchy, one could be arrested for wearing one of Fargeon’s expensive concoctions, as they were deemed pure luxury linked to the hubris of the fallen queen and her fashionably entitled court.

Kings and queens rise and fall, but it is the sillage of abandoned palaces and overgrown gardens that echo throughout history. In this way, they live forever.