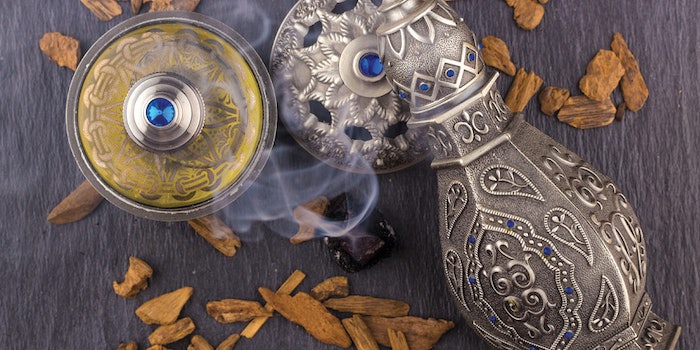 When a German writer nosed pure oud oil for the first time in his life at a centuries-old Indian perfumery in northern India many years ago, his reaction was explosive. "This smells like a cow shed," he exclaimed! The Arab world and India boast of ancient heritages and traditions of non-alcoholic perfume oils, where the perfumer places a drop of fragrance on the back of the customer’s hand rather than on a paper strip, to get an idea of how the fragrance unfolds on the skin. The kind perfumer took no offense to the German’s sudden reaction as what was smeared on his hand truly smelled of manure, the real oud ingenuity test!

Talking about oud is like penning down the biography of the fragrance world’s sovereign monarch. What is most intriguing about this natural substance—which rightfully smells obnoxious to many—is that it is the most sought-after perfumery ingredient in the world and more expensive than gold.

Originally known as agarwood from the word “agar” in India’s ancient Sanskrit language, the Arabic term oud (meaning wood), is more widely used. Additionally, aloeswood is another name for oud, among others.

In the forests of South and South East Asia, Assam in eastern India, Cambodia, Laos, Thailand and Borneo to name a few, the infected, fungoid bark of the aquilaria tree produces an aromatic hardwood. While slices and flakes of this wood are used as incense, the wood is distilled to extract the oil. Agarwood oil is used in a variety of ways, by itself as fragrances and for medicinal uses, and as a perfumery ingredient for fragrance blends.

Each of these regional forests produce its own variety of oud, each bearing the stamp of distinction with its unique fragrance. Assam, for example, produces a variety that is animalic and intensely deep. Naturally, aged agarwood, which is derived from naturally occurring fungus infecting a live tree over time, is usually of the highest quality. It is said that fungus is often artificially induced in aquilaria trees in recent times for quicker production. This yields much inferior quality agarwood.

Tajul Islam Bakshi of Assam Aromas, one of India’s renowned agarwood distillers, believes while it takes the aquilaria agalocha tree around five to six years to mature that it may often take more than twenty years for resin formation through natural fungus infection, depending on climatic and environmental factors. The aquilaria, a self-germinating plant, has short-lived seeds and requires humid climates to flourish. “Agarwood has become less animalic today as we seldom find animals regularly taking shelter under the aquilaria trees due to excess deforestation. While Assam’s agarwood is generally sweet, animalic, fruity and smoky, region and maturity also play a role in determining agarwood’s fragrance, just like it is with tea,” Bakshi explains.

He believes that while the color of agarwood oil deepens with age, its fragrance and color can vary with every batch. The market for Indian agarwood has now extended beyond the Middle East, to North and South America and Europe.

The Arabs are famed for their fierce passion for oud. Right from the beginning of Islam, oud has been a part of Arab daily life. There are “hadith” or prophetic sayings in Islam that speak about oud and its benefits. Theologians believe that the Prophet Muhammad not only used oud himself but also recommended its usage to his followers for its spiritually elevating aromas and health benefits. Using oud is thus considered “sunnah” or prophetic tradition.

Indian oud (“oud al Hindi”) has been a favorite of the Arabs followed by Cambodian oud (“oud Kambodi”). More than other regions of the Muslim world, oud flows like water in the Gulf—the Arab world’s wealthiest region—where it is not just a fragrance but a way of life.

Pure oud oil is called “dehn al oud” (fat of the wood) in Arabic. As exorbitant as it can get, oud oil with its formidable aroma has enchanted the Arabs who not only wear it on their bodies and clothes, but the men also often smear it in their beards, and the women, in their hair.

Since alcohol is “haraam" or forbidden in Islam, non-alcoholic oil concentrates called attar have been a part of Islamic tradition, although many modern Arab brands also sell perfume sprays. Arabic attars are generally known to be audacious, woody, spicy and warm with a strong oud note. The word mukhallat means “blended” generally refers to exotic Arabic blends created with ingredients like rose, saffron, musk and amber that compliment oud and offer outstanding sillages and longevity.

Attars form an integral addition to celebrations, festivals and Friday prayers. Guests are welcomed with a few drops on their hands during weddings for instance, as are worshippers, before entering mosques.

Tunisian culture scholar Sidi Adel believes that bakhoor is the quintessential symbol of celebration. It enlivens festivals like Eid, in which the incense is continuously burnt. “Bakhoor spreads cheer, dispels negative energy and creates a spiritual vibe in the home. It’s a sign of Arab hospitality. During social gatherings, the mabkharah is passed on among the guests who, on receiving it, recite du’a, or prayers, for the Prophet Muhammad (peace be upon him), even scenting their clothes with the smoke” he explains.

Sidi believes that bakhoor is also considered as protection against the evil eye. “The Arabic phrase ‘inbakharu lak’ (may you be incensed to be guarded from the evil eye) is a way to humorously commend or congratulate someone in a lighter vain, especially children or adolescents!” he smiles.

India houses one of the world’s most important agarwood reserves in its eastern forests of Assam. Oud has been a part of ancient Indian history for several millennia.

Right from the Vedic era, agar has been a part of Indian culture. In the “ashtagandha,” or list of eight natural fragrant treasures, agar is mentioned first.

It is believed that along with sandalwood, agarwood—also called “agaru”—was once offered to the sacred fire during “havan” rituals central to the Vedic religion. The ancient medical science of Ayurveda speaks about the numerous health benefits of agar, like healing wounds, skin diseases, coughs and colds, to name a few. Agar is also an age-old aphrodisiac.

Vedic researcher and historian Dr. Srinivasan Krishnaswamy, who is based in Assam, explains that agar finds prominent mention in ancient classical Indian texts. “The Ramayana, one of the most important mythological texts, speaks about the revered King Dasharatha’s corpse being embalmed with agar oil among other materials. While the Mahabharata, another great mythological epic, talks of the feel-good effects of agar, the classical text ‘Bruhat Samhita,’ which is synonymous with fascinating references to fragrance, speaks about agar as ‘the pleasing aroma that monarchs would enjoy,’” he explains.

Because of its high demand in the Arab market, the prices of oud have sky-rocketed over many decades, making it largely unaffordable by the common Indian.

The prices of perfume oils and oil extracts in the Arab world and India are calculated by way of “tola” or 10-12 ml (depending on the perfumery or brand) which many perfumers and aficionados consider a standard quantity. Pure dehn al oud oil would cost approximately between USD $100 and USD $5,000 per tola in countries like Saudi Arabia and the UAE. Many brands even sell oud oil for much lower prices. While one can buy oud oil in its purest form, many brands even have blends with a dominant dehn al oud and other subtle accompanying notes like woody notes, amber, musk, saffron or rose.

Although there are many vendors in India who sell synthetic alternatives to oud, there are still a few Indian boutiques that sell pure oud oil for extremely high prices ranging between 10,000 to 20,000 Indian rupees (approximately USD $154 to US $304) per tola. The prices of agarwood (in raw wood form) are estimated to be as high as around 20,000,000 Indian rupees (around US $30,620) per kilo.

With its rigorous and delicate harvesting process (picture above is the preparation of carving the oil-rich sections of the wood), it’s no wonder oud is worth more than gold. Depending on its purity, oud oil can cost more then USD $30,000 per kilo, according the International Journal of Pharmaceutical and Life Sciences.

India, too, has an ancient tradition of attars, which are milder and more soothing than their Arabic counterparts. Although India’s fragrance heritage is renowned for flowers distilled over a sandalwood oil base, pure extracts and pure sandalwood oil, the concept of blends is relatively recent, with a few perfumers who have made magic with oud blends. These blends often contain arabesque notes like amber and saffron, while many are florals with a dominant rose and a rich base note of oud forming a subtle carpet in the dry-down.

The word agarbatti for an incense stick is originally derived from agar, meaning “light or flame of agar.” Indian incense sticks were said to be once made of pure agarwood powder; and due to steep prices, this is now a complete rarity making the art almost extinct. Guru Acharya of Nandita Fragrances is an eminent promoter of the art of traditional Indian incense and a renowned representative of the legendary south Indian tradition that dates back centuries. Some of his original agarwood agarbattis include Dehn Al Oud, Acharya Oud and Arabian Oud, which contain a portion of pure agarwood powder and oil. These unique incenses are reminiscent not only of ancient Indian spiritual rituals but also of gilt-edge Arab grandeur.

Acharya has also created outstanding bakhoors that are popular in the Arab market, including Barakah, Afreen and Marhaba, and contain eclectic bouquets of rose, musk, amber and sandalwood. Despite being an Indian, he has successfully matched up to the Arab standards of excellence. He says, “Oud is an expensive, rare oil, sensual and aphrodisiacal, with numerous mental and physical health benefits. It enhances positive energy and instills absolute inner peace.” His musky, dusky and moist attar oud with oud, sandalwood, amber and musk is among India’s indigenous high-end oud blends.

Oud is like a wild, brash and untamed bachelor who would take an empathetic and sensitive mind to understand him in the true sense! But surprisingly, he is transformed into a chivalrous, classy and charming gentleman when married-off to the right notes!

Oud often appears like truth: bitter, intense and often politically incorrect. But when uttered by an articulate and refined tongue, it can liberate, just like oud does when blended and expressed with sophistication, passion and panache!

Oud is not only the king of fragrances but the king of hearts that has captivated, seduced and elevated mankind through the ages with the mysterious spell that it casts on the senses. From the rishis of ancient India, to the medicine mavericks of China, to the towering sheikhs of Arabia, oud tells its story in a language far beyond words, with every drop and every whiff!