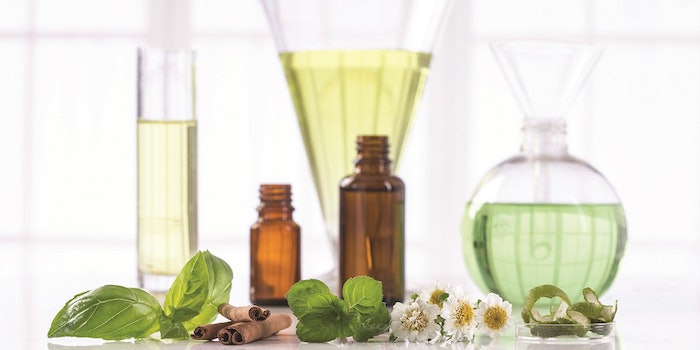 Consumers focused on health and wellness have driven a number of global trends. These range from athleisure wear and wearable devices, to ready-to-eat functional foods, flavors and beverages. According to the firm Grand View Research,1 these trends show no signs of slowing. The flavor and fragrance market was valued at US $18.6 billion in 2015, and has a projected CAGR of 4.5% through 2025—owing mainly to increasing demand in health and wellness related applications.

Specifically, the firm notes that the food and beverage industry will grow due to demand for ready-to-eat meals, processed food, snacks, juices and other beverages. In addition, the pharmaceutical, dietary supplements and nutraceutical markets are on the upswing. And for all of these sectors, the prevailing preference is for natural flavor ingredients.

On the fragrance side, increasing disposable incomes are expected to drive the demand for scents used in cosmetics, personal care, perfumes, soaps and detergents. Once again, and not surprisingly, natural fragrances are preferred due to the perception of being safer, healthier and more therapeutic.

How has the industry responded to these drivers? A brief look at the literature gives some indication and includes natural extraction, production and modification processes; authentication techniques; and even biometric efficacy research. Following are select examples.

Going back to the basics, researchers Kara et al. explored the effects of seawater as an extraction solvent for oil-bearing rose (Rosa damascena Mill.) in comparison with distilled water. Their work was published in the International Journal Secondary Metabolite.

Fresh rose flowers collected at full bloom in the early morning were distilled with pure water (control) and Mediterranean seawater using a Clevenger hydrodistillation apparatus. The constituents of essential oils obtained were identified with GC-FID/MS.

Essential oil yield was not significantly affected; however, hydrodistillation with seawater gave a slightly higher yield (0.045%) than pure water (0.042%). Specifically, a total of 23 constituents were detected by GC-FID/MS. The main compounds in both rose oils were citronellol, geraniol, nerol and nonadecane. Interestingly, the seawater extract showed a significant decrease in the citronellol rate, from 41.49% to 33.56%, and significant increases for both the geraniol, from 17.58% to 27.44%, and nerol, 6.45% to 12.21%. The authors noted these results should be examined in more detail and at industrial scales.2

New work published in the Journal of CO2 Utilization describes the use of supercritical carbon dioxide (SC-CO2) as the reaction medium in biocatalytic processes to enhance reaction conversions. According to the authors, since the demand for fresh and natural products is increasing, new production methods such as these are of high interest to produce natural flavor compounds.

In this work, SC-CO2 was used for the biocatalyzed chemical synthesis of flavor esters using lipases as a catalyst. This showed some operational advantages, such as the capability to tune properties including density, viscosity and solubility, and to control critical conditions. The use of co-solvents, reuse of the catalyst, nature of lipases (free or immobilized) and pressurization/depressurization steps, however, require further evaluation to optimize the ratio between enzymes, substrates and solvents.3

An upcoming article in Food Control considers the fact that truffle-flavored olive oils sell at a high premium yet rarely contain real truffles or natural truffle aromas. Thus, this work aimed to characterize truffle oils and explore techniques for authentication.

According to the article abstract, the researchers characterized and compared, by metabolic profiling and stable isotope ratio analysis, the flavors of commercial and internally prepared truffle-flavored oils (with both natural and synthetic flavors); non-flavored oils; and actual fruiting bodies of the white truffle Tuber magnatum.

"For the first time, eugenol was also detected in fermented horse gram, providing a new bioprocessing strategy for this aroma compound."

Stable isotope ratio analysis of 2,4-dithiapentane, a characteristic odorant found in most flavored truffle oil samples, could not differentiate between natural or synthetic flavors. On the other hand, metabolic profiling revealed the truffle flavor was imprinted to oils based on four to six sulfur-containing volatiles. Two in particular, dimethyl sulfoxide and dimethyl sulfone, were exclusively detected in commercial oils regardless of their synthetic or natural labeling. Overall, these results showed inconsistencies in product labelling and raised questions regarding the authenticity of oils.4

A new article published in the journal Molecules explains the role of non-conventional yeast (NCY) species for forming aroma compounds. This application is well-known and has inspired work to leverage food-derived NCYs as biocatalysts for natural aroma production.

For instance, in the present study, the authors isolated, characterized and evaluated the aroma-producing capacity of Pichia cactophila 7.20 and Klyuveromyces lactis 6.10 NCY strains derived from regional goat milk cheese and Swiss-type ripening cheese, respectively. Their aroma profiles were analyzed through solvent extraction and GC-MS, then the strains were tested in bioconversion cultures with branched chain- or aromatic amino acids as the sole nitrogen source, to determine their ability to form amino acid-derived aromas. Results showed both strains held extraordinary potential for the production of 2-phenylethanol (at more than 3 g/L) and isoamyl alcohol (approx. 1.5 g/L).5

Fermentation-mediated volatile metabolites such as acetic acid, eugenol, benzyl alcohol (benzene methanol), acetoin, 2, 3-butanediol and ethyl palmitate were the prime contributors to the sensory attributes of fermented samples. Notably, for the first time, eugenol was also detected in fermented horse gram, providing a new bioprocessing strategy for this aroma compound. The authors concluded the fermentation of horse gram sprouts enhanced its volatiles composition, which has relevance for improving value-added flavor and health benefits from short chain fatty acids, and for integrating potential probiotic benefits.6

Finally, neuroscience is lending itself to proof that naturals and other materials offer well-being and even anti-anxiety benefits; aligning perfectly with the consumer drive for wellness. For example, in a recent edition of Physiology & Behavior, authors tested the effects of essential oil from Juniperus virginiana L. (Eastern red cedarwood essential oil, or CWO) on anxiety behavior in mice.

Interestingly, cedrol produced significant anxiolytic effects in two tests at 400–1600 mg/kg and 800–1600 mg/kg. In contrast, cedrene actually induced anxiety-related behaviors. Among other observations, the authors concluded that CWO and cedrol, in particular, might impart anxiolytic effects through the 5-HTnergic and DAnergic pathways.7