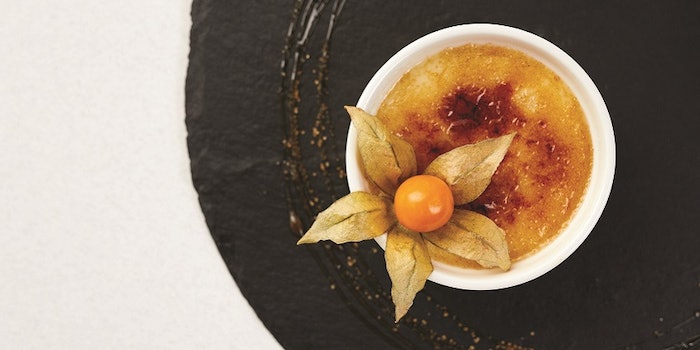 How do I arrive at the choice of chemicals to highlight in these articles? There are three sources of inspiration. Some years ago, I was challenged by a small-scale automated compounding unit that could only accommodate a very limited number of ingredients. How to make a reasonably wide range of flavors with the absolute minimum of raw materials? Which ingredients were truly essential? This exercise inevitably broadened my understanding of the range of flavors where these essential ingredients could be used to good effect.

The second source of ideas is chemicals that are new, novel or have been overlooked in the past. The final, but obviously most important, source of inspiration comes from readers. This chemical falls into the last category.

Propenyl guaethol (FEMA# 2922, CAS# 94-86-0), also commonly known as Vanitrope, was originally introduced as a 25 times stronger version of vanillin. The twenty-five-fold part was wishful thinking; the relative strength varies in different flavors but is generally nearer twenty than twenty-five.

The profile of propenyl guaethol is very clean and somewhat similar to vanillin, perhaps with a touch of heliotrope. It works extremely well in combination with vanillin and, especially, with ethyl vanillin. In brown flavors it is best to avoid very high levels except in the case of French style vanilla, where the natural affinity with heliotropin is very beneficial. The optimum balance in brown flavors, in my opinion, is to derive no more than half of the vanilla character from propenyl guaethol, with the remainder coming from ethyl vanillin and/or vanillin. With other, non-brown, flavor types propenyl guaethol can often be used to good effect alone.

Brown Sugar: Propenyl guaethol at 50 ppm is a good place to start in a flavor intending to deliver a realistic impression of brown sugar.

Caramel: Around 500 ppm can be used in caramel flavors and also in the closely related butterscotch and toffee categories of flavors.

Coffee: The ideal level of propenyl guaethol in coffee flavors varies considerably, 10 ppm is good in darker roast styles, but up to 200 ppm can work well in richer styles.

Licorice: The addition of propenyl guaethol in licorice flavors depends on the degree of aniseed character, but 100 ppm is reasonable.

Malt: Malt flavors typically should use around 200 ppm of propenyl guaethol, unless a specifically vanilla note is required.

Maple: Propenyl guaethol is never the dominant character in maple flavors but it is often used at relatively high levels, in the region of 500 ppm, when strict authenticity is not the primary goal.

Vanilla: Most vanilla flavors can be built around a substantial contribution from propenyl guaethol. This can range up to around 2,000 ppm, in flavors that are relatively simplistic, but much lower levels are better in more realistic bean type flavors.

Apricot: Apricot flavors commonly accommodate widely varying levels, up to 20 ppm conveys authenticity, and levels up to 200 ppm move more in a fantasy direction but are nevertheless attractive.

Banana: Propenyl guaethol at 100 ppm is a good level to add to banana flavors, adding depth and offsetting the clove notes.

Blackberry: As with apricot flavors, the level of use can vary widely, but an effective level in an authentic style flavor is around 20 ppm.

Blueberry: A good starting point is 10 ppm in blueberry flavors, offsetting the floral notes and adding depth of taste.

Cherry: Cherry flavors vary in style, a good level in realistic style flavors is 20 ppm, but much more propenyl guaethol can be used in very fruity and almond style flavors.

Gooseberry: Gooseberry flavors can easily become thin and light, but this effect is reduced by even modest additions of this ingredient, around 10 ppm.

Melon: Some watermelon flavors contain relatively high levels of propenyl guaethol, but this gives an obviously artificial, fantasy effect and levels in the region of 5 ppm taste more natural in all styles of melon flavors.

Orange: Propenyl guaethol makes an interesting addition to orange flavors at around 5 ppm. The effect is not strictly natural, but it can nevertheless be quite attractive.

Peach: Realistic levels of propenyl guaethol in peach flavors are much lower than in apricot flavors, typically around 5 ppm. More can be used in candy style flavors but rarely to good effect.

Pear: High levels in pear flavors taste uncharacteristic, but levels in the region of 10 ppm add depth and subtle sweetness to a flavor than can easily tend to be bright and thin tasting.

Raspberry: Use levels of this ingredient in raspberry flavors can vary, levels up to 20 ppm can still convey attractive authenticity and depth, but higher levels can be very pleasant, if less obviously authentic and natural.

Rhubarb: Rhubarb flavors can typically use levels of propenyl guaethol around 50 ppm without seeming artificial. In this fruit category, propenyl guaethol works especially well when it is used in conjunction with vanillin.

Strawberry: Modest additions of propenyl guaethol, around 5 ppm, have a surprisingly realistic effect, even in fresh style strawberry flavors.

Cream: High vanilla notes can easily seem ridiculous in cream, condensed milk and other dairy flavors but are surprisingly common. Around 10 ppm of propenyl guaethol can be much more helpful to convey a realistic effect.

Coconut: High levels can also be used in coconut flavors but if realism is desired 100 ppm is preferable.

Hazelnut: Hazelnut, walnut and other nut flavors can all benefit from the addition of around 20 ppm of this ingredient. Propenyl guaethol works particularly well in nut flavors.