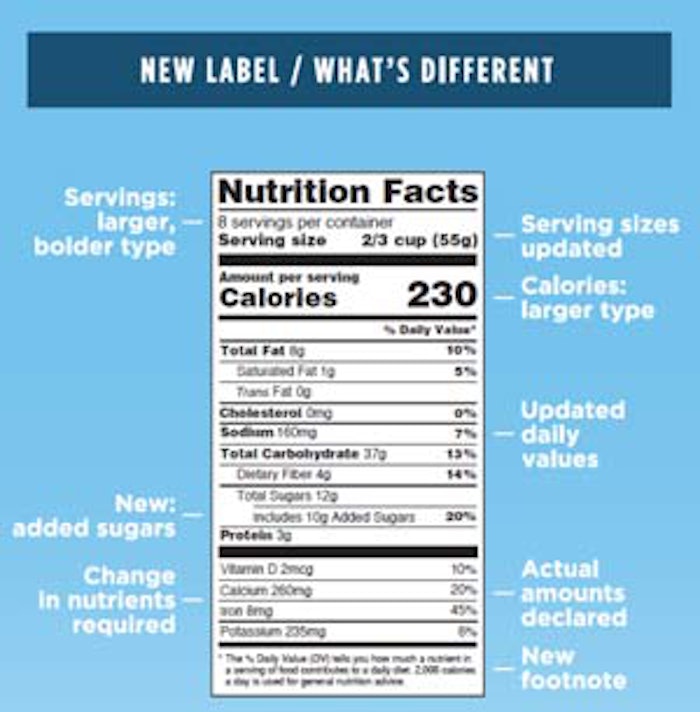 The U. S. Food and Drug Administration (FDA) has made its final changes on the Nutrition Facts Panel, and in response, the American Beverage Association has announced it will commit to offering more low- and no-calorie beverage options.

As part of the change, "added sugars,” in grams and as percent Daily Value, will be included on the label.

"Scientific data shows that it is difficult to meet nutrient needs while staying within calorie limits if you consume more than 10 percent of your total daily calories from added sugar, and this is consistent with the 2015-2020 Dietary Guidelines for Americans," the FDA said.

In response to the change, the American Beverage Association said: “We believe that people should have clear and understandable nutrition facts about foods and beverages so that they can make informed choices that are right for themselves and their families. America’s beverage companies have supported nutrition transparency; it’s why we voluntarily placed clear calorie labels on the front of every bottle and can we produce in support of first lady Michelle Obama’s 'Let’s Move' campaign in 2010."

Further, it said: “We look forward to continuing our commitment to offer a wide variety of beverages – including more low- and no-calorie options and smaller portion sizes – and to engaging with the FDA to make sure consumers have the information they need.”

Manufacturers will need to use the new label by July 26, 2018. However, manufacturers with less than $10 million in annual food sales will have an additional year to comply.