Editor's Note: The Art of Natural 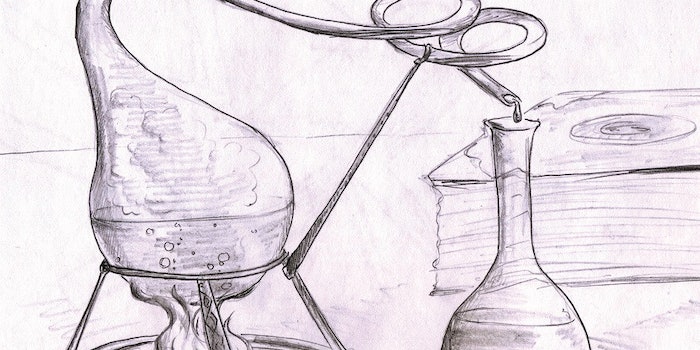 The art of extraction.

The phrase sent me down a quest to learn more about this fascinating, philosophical, scientific and spiritual metaphor. Distillation methods date back to the beginning of civilization, where oils were used for medicinal and spiritual purposes to eradicate viruses, bacteria and fungi and induce a transcendental meditation. In the first century A.D., the Greek jack of all scientific trades, Pedanius Dioscorides hung bundles of wool above vapors of boiling liquids and wrung them out to capture the distillates. In the third century B.C., Aristotle made sweet water (also known as freshwater) by evaporating salt water and condensing the steam.1

According to The Philosophical Elixir of Vegetables by 17th-century alchemist Baru Urbigerus, he described the spiritual connection with distillation as “the purification of the unborn self – all that we truly are and can be.” In the physical realm, distillation is expressed as scientific and objective experimentation, which is also the theme of this issue.

This issue, we feature a few articles on the latest research in naturals, from extraction to authentication. In order to successfully perform an essential oil extraction, a 100% pure oil is best. What with a growing production demand for natural ingredients paired with limited raw materials, rising costs and volatile weather conditions, adulteration continues to be a challenge facing today’s industry. We take a look at radiocarbon testing, or carbon-14 testing, in high-value ingredients like peppermint (page 22) to determine naturality.

Speaking of plants, we explore the roles that microorganism and thermal processing play in dairy flavors and how these enzymes can be used to develop tasty vegan flavors (page 36). According to a Nielson reporta, plant-based foods have exceeded $3.3 billion since 2018, with plant-based cheeses reaching $124 million in sales and growing at 43%, while, plant-based yogurts grew 55% with $162 million. It couldn’t be a more exciting time to learn more about masking unwanted flavors from plant proteins.

The art of distillation is a sweeping metaphor for reaching the true essence of a material. I hope you find glimpses of this metaphor throughout these pages and in your own work.

With warmth from Brooklyn,

Recommended Reading: The Art of Distillation by John French