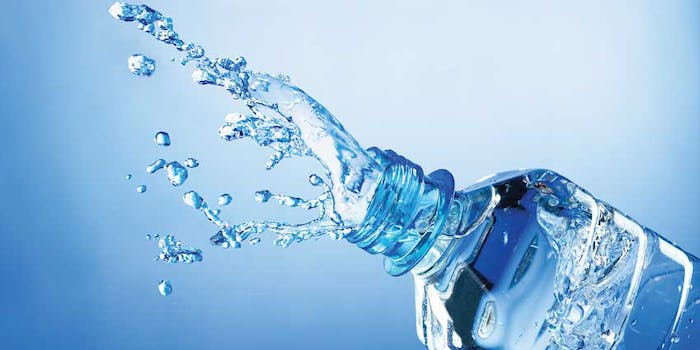 In a health-conscious era, consumers are drinking more water and moving away from sugary beverages. A national surveya conducted by Toluna, reported that 58% of Americans tend to focus more on healthy lifestyle choices leading into the warmer months, and of those people 61% say they try to drink more water in an effort to lose weight and get healthier. However, 39% of Americans have a hard time drinking water because the lack of flavor turns them off. Mintel’s research supports this trend and half (48%) of bottled water drinkers say they are drinking more flavored waters to replace high sugar drinks.b

According to Canadean, U.S. water shares rose from 16.3% in 2005 to 22.5% in 2015, taking market share away from carbonated soft drinks (CSD).c Correspondingly, CSD shares declined from 28.8% to 23.6% during the same period. Chicago-based Information Resources Inc.’s (IRI) datad reported that the bottled water category as a whole was up 9.3% year-to-date, for $14.2 billion in the 52 weeks ending May 15, 2016 in U.S. supermarkets, drug stores, gas and convenience stores, mass market retailers, military commissaries, and select club and dollar retailers.

Trendincite’s “Forward Thinking: Liquid Assets, Part 1” article, which appeared in the October 2015 issue of Perfumer & Flavorist magazine, explored a variety of beverages including flavored, carbonated, natural and ingredient specific waters. In addition to hydration, water market activity continues to be driven by premium status, new flavors and functional ingredients. Sparkling water spiked with alcohol and crystal-infused water is on trend and sustainable ingredients, production and packaging are of interest.

Premium waters, those that focus on calibrated pH levels, minerality, purity and presentation are on the rise. According to data from market research firm SPINS,e premium water accounts for a 2.3% share of the $14 billion bottled water market, growing at a rate of 20% since the beginning of 2016. A telltale sign of the consumer’s interest in premium water is Los Angeles based Patina Group’s investment in Martin Riese,f “America’s only certified water sommelier,” certified by the German Water Trade Association since 2010. Another example is Dublin’s coffee house 3FE. In November 2015, 3FE received attention for the café’s water tasting menu, which was done to educate its customers about how their coffee’s flavor is affected by the quality and content of the water used to brew it. For example, Aquiemg water is specifically engineered to enhance the coffee experience. The water undergoes a stringent purification process and only the minerals that amplify coffee flavors are added back to the finished product.

In February, PepsiCo introduced Lifewtr,h purified water, pH balanced with electrolytes added for taste. The premium bottled water line “aims to appeal to consumers looking for hydration with a side order of art” and features three artist designed labels. Artists MOMO, Craig & Karl and Jason Woodside each designed a bottle in series 1 and according to PepsiCo the bottles will change several times a year with rotating artists. Divinia Wateri was in development for 12 years and launched in 2015. Self-described as “the only bottled water on Earth that provides clean, hydrating, oxygenated, deuterium depleted, EZ water,” the company completed a seed funding round at the end of 2016 and raised $800,000. The premium water takes eight hours and 14 stages of filtration to purify three gallons of water. “Through our growth we are perfecting and completing our commercial unit so that we will be able to produce the same quality of water at a much more efficient rate - about 96 gallons a day per unit. Through our R&D we will be able to replicate many commercial units, to work in tandem and build an eco-friendly bottled water facility that meets larger demands,” states Divinia COO Kiersten Sedlmayr Lander.

Consumers’ interest in healthy lifestyles fuels their demand for healthier beverages. Yet, consumers still crave the flavor and bubbly, effervescence of soda but not the sugar content or calories. Flavored sparkling waters are meeting consumers’ expectations. The sparkling/mineral bottled water segment experienced a 15.5 % increase in sales year-to-date for the 52 weeks ending May 15, 2016 bringing sales to nearly $2 billion for the segment, according to IRI.j According to a Bevnet.com December 13, 2016 article,k,l Nielsen reported flavored sparkling bottled water varieties were up 15.6% in dollar sales and 16.1% in volume sales, driven by big gains for National Beverage Corp.-owned LaCroix, (up 67.4%), Nestle Holdings (up 18.7%) and Polar Corp. (up 14.9%).

LaCroix has a cult following and in 2015, the company added three Cúrate flavors “inspired by healthy living” –Melón Pomelo (Cantaloupe Pink Grapefruit), Kiwi Sandía (Kiwi Watermelon) and Muré Pepino (Blackberry Cucumber). In the spring of 2016, Voss added Lemon Cucumber and Tangerine Lemongrass to its lineup. Grape Raspberry launched in December 2016 and is the 16th flavor in the Sparkling Ice portfolio. Original New York Seltzer, the popular 1980s beverage, returned to market in 2015 after a two-decade absence. In addition to the six original flavors, the company has since launched Blueberry, Cola & Berry, Concord Grape and Orange.m Original New York Seltzern is premiering a new sparkling water line made with sparkling water and natural flavors in six variants – Coconut, Grapefruit, Lemon, Lime, Orange and Original. The beverages are unsweetened and have zero calories. Marketed to children from four years old to 16, Tickle Water is offered in four flavors – Cola, Green Apple, Sparkling and Watermelon. The beverages are free from sugar, gluten, GMOs, sodium, calories and artificial sweeteners.

For consumers that want an alternative to fruit flavors, spicy directions are slowly trickling into the category. For example, Dry Soda Co. debuted Serrano Pepper Sparkling Water as a limited edition seasonal summer flavor and in the fall the company introduced a limited-edition special packaged 750 ml bottle of Ginger Sparkling Water. Although not water, two additional interesting spicy beverages are SoBe En Fuego, a spicy limeade that pairs lime with heat, and Swedish brand Caliente, an organic, non-alcoholic beverage infused with chili and Swedish ingredients. Caliente is available in two varieties – Cranberry, Pomegranate and Chili and Ginger, Lime and Chili.

Health-conscious consumers continually seek functional food and beverages. Enhanced waters with vitamins, minerals, electrolytes, protein and caffeine continue to launch. According to Mintel research,o more than two-in-five (43%) consumers are interested in bottled water enhanced with vitamins; another three in 10 agree that the ideal bottled water should contain minerals (29%) and energy (29%).

In 2015, Dave Asprey, the man responsible for the Bulletproof coffee craze, introduced FATwater,p which combined Asprey’s signature ingredient Bulletproof XCT Oil with water. It was recalled at the end of 2015. At the end of 2016, FATwater was reformulated and repackaged. It is described as “pure, deionized water mixed with micro droplets of Brain Octane oil, B vitamins and natural sweeteners for a hydrating energy boost.” It is a non-GMO and vegan beverage available in Grapefruit, Lemon and Pineapple flavors.

Not an enhanced water per se, but a notable introduction is Evian’s Fruits & Plants line, which “combines its natural mineral water from the Alps with a unique pairing of fruits and delicate botanicals.” Launched in Europe in 2016, the line features three flavors – Grape Juice Rose Flavor, Lemon Juice Elderflower Flavor and Raspberry Juice Verbena Flavor.

Caffeine is a popular ingredient in energy drinks and coffee, but is now spilling into water. In 2015, Hint Water added Hint Kick a line of water infused with 60 mg of caffeine from coffee bean extract. Hint Kick is available in three flavors – Apple Pear, Black Raspberry and Lemon Cayenne.

The growth of carbonated bottled water and the interest in low-calorie alcoholic beverages that are better-for-you is creating the perfect storm for spirits manufacturers to introduce spiked waters. Year-to-date through November 27, 2016 volume sales of all flavored malt beverage products were up more than 6% in supermarkets, according IRI.q

SpikedSeltzer by Boathouse Beverage LLC pioneered this trend with the launch of its namesake brand in 2013. Anheuser-Busch InBev acquired Connecticut based Boathouse Beverage LLC in September 2016. In March 2016, Craft Cocktail Company debuted Nauti Seltzer in four flavors – Cranberry, Grapefruit, Lemon Lime and Raspberry; each beverage is110 calories with 5% ABV.

In April 2016, Truly Spiked & Sparkling beverages introduced a line of spiked waters in three flavors. In October 2016, Truly Spiked & Sparkling added Sicilian Blood Orange to the range. Joia, the all-natural soda brand, is riding the coattails of this trend and in October 2016 the company launched Joia Spirit, a line of ready-to-drink cocktails made with the company’s all-natural soda and vodka in three varieties.

Water and beauty go hand-in-hand. For the more spiritual and DIY consumers, crystal-infused water is trending. High-vibration water is said to transfer the unique vibrations of a crystal during the infusion process and when consumed, the energy and proprieties of the crystals are transferred. In UK, Nectar Cafe has received a lot press for its high-vibration waters. The cafe’s menu features 24-hour immersion of positively charged crystals and botanical extracts with alkalined water in four variants –Blue Moon Dream Waterr made with lapis lazuli, sage, vibrational moon essence and clitoria ternatea flowers; Sacred Heart Vibrational Water formulated with rose, frankincense and rose quartz; Nervine Vibrational Water with oat, chamomile and citrine and Digestive Vibrational Water has mint, fennel and amazonite. VitaJuwel ViA is a glass bottle designed with a “gempod” filled with a selection of hand-picked gemstones available in 17 blends such as Sunny Morning with orange calcite and clear quartz and Beauty with amethyst, aventurine quartz and rose quartz.

Like other food and beverage categories, sustainable water is of interest in ingredients, production and packaging. According to Mintel,s environmental concerns are top of mind for consumers. Two-in-five (39%) bottled water drinkers agree that they are drinking less bottled water because of its environmental impact.

Sold as a premium brand in Australia, AquaBotanical, is a bottled water sourced entirely from fruit and vegetable water that would otherwise be wasted during the production of fruit juice concentrate. According to the company, the full-bodied water has 74 plant minerals such as iron, magnesium, potassium and zinc. The AquaBotanical technologyt has the potential to unlock drinking water from sugar cane production in water-stressed India. Driven by technology, Water Io,u developed a patented disposable IoT Smart-Cap sensor, for disposable water bottles, that alert users when to drink more water to stay properly hydrated and it connects to consumers’ mobile phones to measure real time water consumption. CocaCola European Partners (CCEP) has partnered with Avery Dennison, Viridor and PET UK to turn label waste into products, including the production of 90 million nutrient-fortified Smartwater bottles.v

The water market is dynamic with many segments, flavor profiles, functional ingredients and target audiences. Fueled by the health and wellness trend, the demand for water continues to increase. Expect to see more fruits and vegetables, unusual flavors including spicy directions, more natural and clean formulas and fortified ingredients. Trendincite LLC predicts that the next generation of sparkling non-alcoholic and alcoholic waters will be tree-based such as coconut, maple and birch. 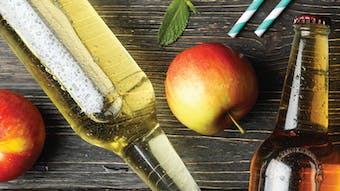