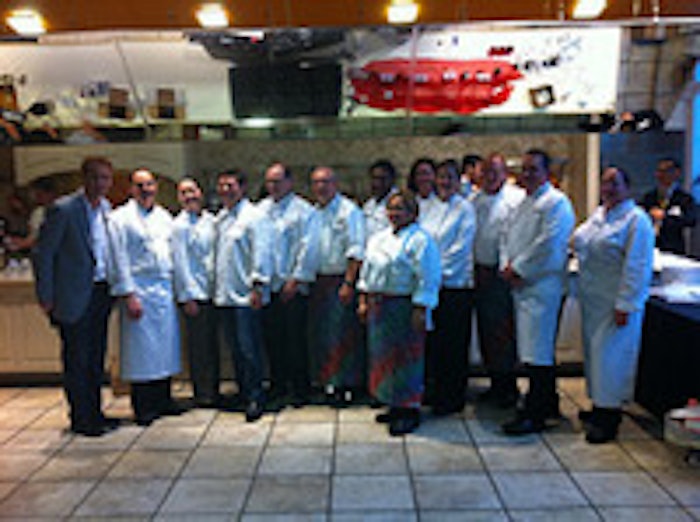 Bell Flavors & Fragrances served up its fourth annual Flavorology event to eager participants on May 20, 2011, at the Chopping Block in Chicago. Flavorology is a gathering of Bell's R&D, application specialists, industry chefs and key customers, where new flavor concepts and technologies are unveiled.

Bell's R&D teams worked in conjunction with each other to achieve maximum innovation. Simon Poppelsdorf, vice president of technical services, stated, “This type of collaborative development allowed for a great information exchange between flavorists and application staff and different categories such as savory and sweet.”

Other Bell tabletops highlighted a line of flavors specifically targeted for private label brands, and beyond exotic and exorbitant flavors for confectionary products. Beverage flavor highlights included the evolutionary tree of today's fruit flavors and spirit flavors from around the world, such as Mango Peppadew® Cooler from Africa or Chamomile Liqueur from Europe, in addition to Bell's Top Ten Flavors of 2011.

The main excitement of the evening came when the CheFusion™ event began. This was an Iron Chef-type competition in which nine top industry chefs formed four teams to create state-of-the-art dishes featuring an innovative use of Bell flavors from contrasting world cuisines. The results were as follows:

Bell Flavors and Fragrances, Inc. is a leader in the flavor and fragrance industry. With manufacturing plants in five countries, as well as over 40 sales offices around the world, Bell has the ability to create the flavor, fragrance or botanical for any application. For more information visit www.bellff.com.