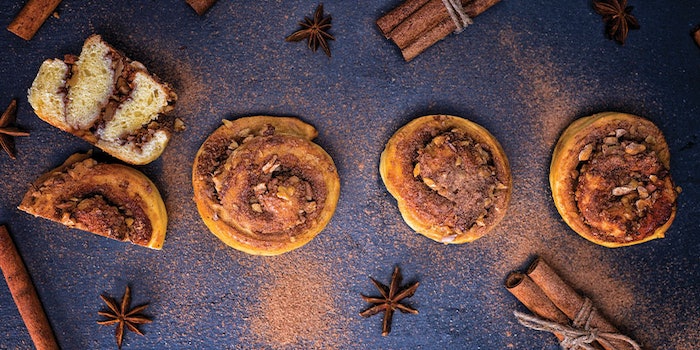 3-Phenyl-2-propenal, better known as cinnamaldehyde (FEMA# 2286, CAS# 104-55-2) is found widely in nature but is best known as the driving force in flavors dominated by the character of cinnamon. The level of use in cinnamon flavors can be very high indeed, 50,000 ppm and more. Because of this, we tend to think of cinnamaldehyde primarily in terms of cinnamon flavors and, unfortunately, neglect it elsewhere. At much lower levels of use, cinnamaldehyde can round out and add depth to a surprisingly diverse palate of more interesting flavors.
Note that the dose rates given throughout this article are the levels suggested for use in flavors intended to be dosed at 0.05% in ready-to-drink beverages or in a simple bouillon.

Orchard Fruit Flavors
Apple: Twenty ppm of cinnamaldehyde is way too low a level of addition to impart a discernible spice note into apple flavors, but it does add nice depth and authenticity to the profile.
Apricot: Apricot flavors can easily become over-reliant on just lactones and linalool. A hint, as little as 5 ppm, of cinnamaldehyde adds welcome complexity and realism.
Cherry: Cinnamaldehyde is most effective in the many cherry flavors with a dominant benzaldehyde profile. Fifty ppm softens the pungent note of bitter almonds nicely and rounds out the profile.
Peach: The effect of this ingredient in peach flavors is very similar to that in apricot flavors, but the most effective level of addition is a little higher, around 8 ppm.
Plum: Cinnamaldehyde plays a much more important role in plum flavors and levels up to 100 ppm can easily be incorporated without invoking an intrusive spice note.