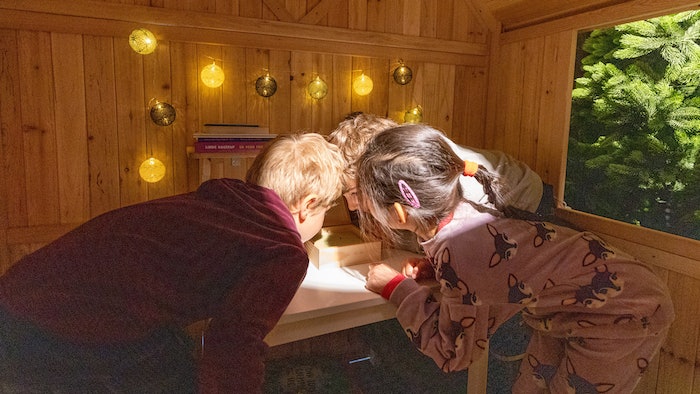 The third odor is that of pine trees and wood, to represent the pig who built the house made of wood, filled with books and decorated with shades of green.
C/O NATALIA KUCIRKOVA

Professor of Early Childhood Education and Development at the University of Stavanger, Natalia Kucirkova, reached out to Perfumer & Flavorist+ with the exciting news of the launch of the world’s first children’s olfactory exhibition. Kucirkova penned the following describing the importance of the exhibition, the research behind its creation and the production of the interactive experience.

Despite its vital role in consumer and social sectors, smell is neglected in education. Today’s children are not learning about how to use their sense of smell in the classrooms. When asked what something smells like, the typical response is it “smells good” or “smells bad.” The next generation needs to be better at naming the many smells and scents we have around us.

This ambition is followed in our project, Sensory Books. Sensory Books is a large-scale, ambitious project to examine children’s sense of smell in early education, with a particular emphasis on its role in children’s stories and literacy. The project is funded by the Norwegian Research Council and has several objectives. One objective is to involve children and community members in experiencing scented stories. Imagine reading books augmented with odors or story installations that emit various scents!

In 2022, our research team at the Learning Environment Center at the University of Stavanger established a collaboration with the children’s museum Vitenfabrikken, the local library in Sandnes with the help of an olfactory expert from the Netherlands. Together, the team developed a scented adventure trail for kindergarten children. The collaboration resulted in a public exhibition designed to engage children’s sense of smell as they explore the classic story of “The Three Little Pigs.” Children use their whole bodies as they follow the pigs’ footsteps and hide in piglets’ houses from the big bad wolf.

The exhibit introduces children to various story-related odors contained in specially designed smell boxes. The boxes are strategically placed around an adventure trail that corresponds to the “Three Little Pigs” narrative. The odors are of different intensities, and children can decide for how long and how closely they smell them by opening and closing each box.

“The Three Little Pigs” story is well-known among children in our target group. The story has a clear storyline (three pigs defeat the bad wolf) and an important moral: hard work and perseverance pay off. The story used for the exhibition is a shortened version of the traditional story and it corresponds to a fragranced adventure trail. This trail consists of five scented story boxes.

We decided to use scented story boxes (rather than ambient scents) as we needed a mechanism that would allow easy manipulation of the odor intensity by the children. It was also important that the boxes are easy to refill or change over time. The smells are placed in a hidden compartment under a colored surface in each box. The boxes’ wooden material works well with the natural and simple design intended for the exhibition. The colors of the handles of each box are matched with the mood-board story stations and smell concepts.

Lotte Meeuwissen produced the smell boxes in collaboration with International Flavors & Fragrances (IFF). Here is a breakdown of the five scent boxes represented throughout the exhibit.

For the first—pig farm smell. The smell conveys the associations of pigs, pee, mud,  and poop, purposefully stinky and placed on the floor of a mini pig farm in the exhibition. Seen above.

The associations for the second smell represent the “pretty pig” utilizing the color pink, with berry and fruity aromas. This box is inside the piglet’s straw house with mirrors and pink pillows inside.

The third odor is that of pine trees and wood, to represent the pig who built the house made of wood, filled with books and decorated with shades of green.

The fourth odor, for the third and final pig, is placed in this house on top of a child-sized stove that conveys the associations of a comfortable and safe home. This clever pig lives in the brick house that the bad wolf could not blow away. The aromas selected for the atmosphere of a cozy, happy home in this house are hot chocolate, milk, confectionery and cinnamon.

While all odors are relatively stable and intense, the odor of the bad wolf was intended to linger in the air and be ambivalent in interpretation. When airborne, it smells unpleasant and reminds visitors of a wet dog or wet animal fur. This was especially scary for children!

Natalia Kucirkova is a professor of Early Childhood Education and Development at the University of Stavanger, Norway and a professor of Reading and Children’s Development at The Open University, UK. Kucirkova’s work is concerned with social justice in children’s literacy, use of technologies and sensory engagement with an emphasis on the sense of smell. Her research takes place collaboratively across academia, commercial and third sectors. She blogs for Psychology Today and her latest book is “The Future of the Self.” 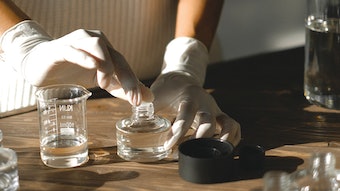