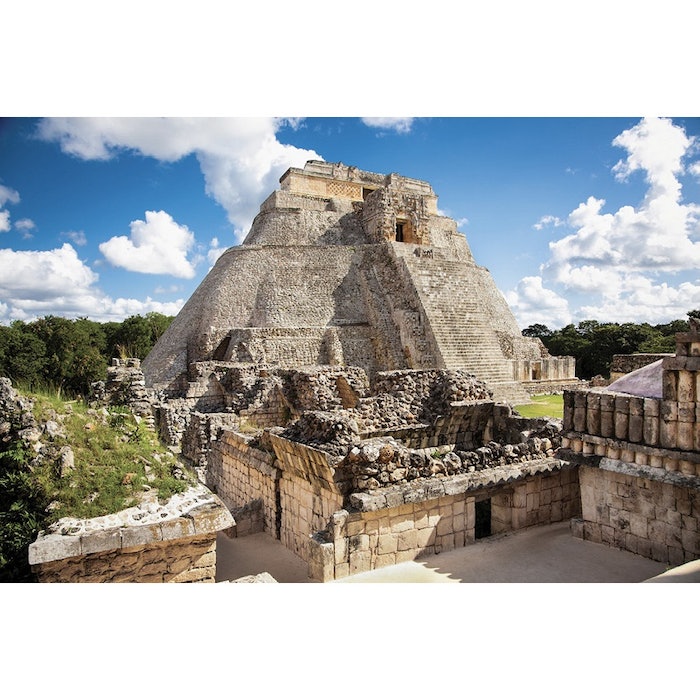 Copal blanco is a sap found in the pitch pine, which hardens in contact with the air. Also known as the “blood of trees,” it was used in sacred rituals in North American Aztec and Mayan cultures to lift the veil between the spirit realm and the human realm. Pictured here is the Magician Piramide del Adivino in the ancient Mayan city Uxmal in Mexico. Photo by Aleksandar Todorovic via Dreamstime.

This culinary journey began with questions about Mexican traditional food, and the link to the country’s ritualistic, ancient culture. What I have found, is that the preparation of a feast in Mexico is a ritual in itself. It is a linking of past and present, the care, love, innovation and understanding of culinary balance – both of tradition and experimentation and is passed on and on and on…

The alarm is still chirping insistently as I roll out of bed on Sunday morning, the early hour set so that I can make it to La Nueva Union Bakery in Ditmas Park (Brooklyn, New York) on time for champurrado and arroz con leche, two steaming drinks that are truly coveted by both the hungover crowd, families, the neighboring firehouse and police precinct. There are only ten cups of each available, I am told the day before, as these steaming elixirs are made at home and brought in thermoses on Saturday and Sunday only.

The recipes are passed on from generation to generation. Champurrado is a concoction of cocoa and water infused with cinnamon sticks and hand-roasted, hand-ground cornmeal. There is a thickness akin to porridge, and this semi-sweet, light chocolate, delicately spiced drink carries a comforting soft aroma. The arroz con leche is a sweet creamy mix of rice, milk and sugar—the taste similar to rice pudding—and its simplicity and hint of vanilla is its brilliance.

Both drinks require long cooking with constant stirring and are protected recipes enjoyed by only a few local neighborhood denizens “in the know.” The aromatic steam rises from the to-go cups amidst the baking of sugar-coated rolls and sweet breads, baskets of poblano, serrano and ancho peppers, tomatillos, avocados and stacks of crema and queso.

My friend Ximena first introduced me to copal blanco, white copal; from the Aztec word, “copalli,” which she brought back from her family’s house in Mexico. The gum resin, when burned, lifts in the air in great billowing clouds. White copal has an aroma that can be described as primordial. Its leathery, animalic and arboreal notes are cradled in plumes of heavy smoke that hold a humid note within, like the sky before a rainstorm. White copal—most often the sap found in the Burseraceae tree or the pitch pine—is obtained by scarring the bark and releasing the milk sap. The sap, which hardens in the air, is known as the “blood of trees,” and was used in sacred rituals in North American Aztec and Mayan cultures to lift the veil between the spirit realm and the human realm. Archeologist, K. Kris Hirst, in her article “Copal, the Blood of Trees: Sacred Source of Maya and Aztec Incense,” describes that white copal once extracted, was pounded into a paste and stored in gourds, to be burned as incense, or wrapped in maize and gifted on alters to nourish deities. Thus, this mysteriously aromatic sap gained its moniker: food of the gods.1

I was recently in my kitchen with Ximena, a pile of poblano, serrano, jalapeño and ancho peppers, queso and crema, tomatoes and tomatillos, garlic and dark red onions stacked on the counter in teetering colorful towers. Cilantro and zests of lime added to the cacophony of fresh aromas, and white copal burned in the sensor. Ximena explained her grandmother burned the resin daily to clear the air of cooking aromas. Using Ximena’s grandmother’s famed recipe of chiles rellenos-queso—stuffed poblano peppers—the aromas quickly changed in the kitchen. The pungent notes of pressed garlic, sautéed onions, oven-charred peppers, the milky note of melting queso and crema began to meld with the heady incense. Ancient and modern linked, centuries faded in the conjoining of culinary tradition; ritualized in our honoring of the past.

Wear gloves! We were cautioned by Ximena’s mother who shared the recipe with us, as we removed the charred skin from the poblanos, and then lifted the delicate center vein, and spooned out the pepper seeds. Filled with crema and cheese, the peppers were ready for the oven. Then serranos were cut: that bright green dragon of a pepper, and an equally green aroma lifted which sent my lips and eyes burning. jalapeño and tomatillo, garlic, onion and lime were blended to a salsa verde: a veritable explosion of green heat which is deceptively fresh and dangerously powerful.

Peppers have an ancient history in Mexican cuisine and Mayan ritual; chiles were used for food preparation as well as for medicinal purposes, and traces of capsicum annum have been found in Mayan pottery dating as far back as 400 BC. Chili powders were added to the famed chocolate drink, chocolatl; meaning “bitter water,” along with maize and at times flowers, which was enjoyed hot in Mayan culture and cold in Aztec for everyday feasting, as well in ceremonial and medicinal use. In addition to chili, Aztecs added “coriander, sage and vanilla extracted from the pores of a species of orchid.”2

“Chocolate [unmixed with other products; very bitter) was drunk by the Mexica/Aztecs to treat stomach and intestinal complaints; when combined with liquid extruded from the bark of the silk cotton tree…this beverage was used by traditional healers to cure infections. In another recipe, [the beverage was] prescribed to reduce fever and prevent fainting.”3

The Food of Humankind

Ximena and I roasted, charred, sliced and blended chiles of all shapes and colors, testing the spice gingerly on our tongues, catching the varied aromas from dark raison-like ancho to piquant serrano, deep forest-like poblano and bright jalapeño. Serrano and poblano found their way into roasted winter squash with caramelized onions and garlic; the sweetness cradling the chili-fire, along with a bright traditional dish of roasted red peppers, tomato, tomatillos with jalapeño, onions and garlic and a hint of crushed, dried ancho. These dishes are meant to be served with homemade tortilla, a food with its own ancient pedigree, and one which we flattened on a tortilla press given to me by the bakery with great encouragement (and another cup of arroz con leche).

The tortilla, made of ground maize water and salt, was a staple in ancient Mayan and Aztec cultures and known as the food of humankind. In the ancient 16th century religious text, Popol Vuh, ancestors of humanity are described as being made of maize, after failed attempts by the Gods of rendering them in mud, wood and flesh.

“In nature, maize plants sway to and fro, their crisp, green leaves moving like limbs of the human body; the Maize God, too, is in motion, often seeming to dance and sway”- Popol Vuh.4

Traditionally, maize was boiled in lime water, eaten as a porridge with chili peppers or pounded flat into tortillas. In the Día de los Muertos celebrations, tortillas de cempazuchitl are still popular. These tortillas are pressed with edible marigold flowers, known in Mexico as “flor de muerto,” flowers of the dead. The marigolds were cultivated in ancient Aztec civilization, the vibrant orange-yellow color representing the sun, which would guide spirits to the underworld, and which in the Día de los Muertos celebrations, will attract ancestors with its aroma. The flowers are placed on alters amidst decorated sugar skulls, pan del muerto (bread of the dead), often in the shape of a skull and crossbones, and gua de jamaica (hibiscus flower water).5

It is Día de los Muertos which strikes me as the perfect link between ancient and modern worlds. Here culinary tradition, myth and ritual meet. Copal is burned, dishes are prepared as offerings on ancestral altars and for feasting of the living. Spicy peppers, hearty maize, chocolate—both sweet and spicy—herbs, both bitter and sour; all speak of the honoring of tradition, the longing for those who have passed, and the celebration of life itself.