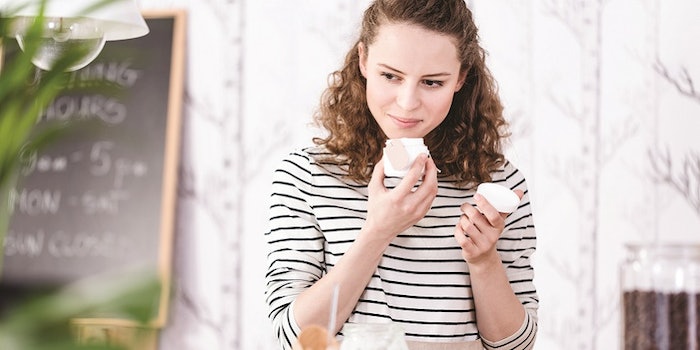 The F&F industry has grown to a multibillion-dollar market but according to these authors, the design and screening of materials still rely on the experience of specialists and available databases. Therefore, proposed in this article is a computer-aided design and screening method to uncover novel fragrance molecules.

Here, the odor of a molecule is predicted using a data-driven, machine-learning approach along with a group-contribution based method for predicting properties such as vapor pressure, solubility parameter and viscosity. Further screening and optimization techniques are used and support the application of this fragrance design/screening method.

The present work evaluated the potential use of certain vegetal raw materials in personal care for antioxidant properties as well as fragrance and other benefits. Four ethanolic extracts were prepared from: grape pomace, Pinus pinaster wood chips, Acacia dealbata flowers and Lentinus edodes. Their total phenolic content, monomeric sugars and antioxidant capacity were determined before incorporating them into cosmetic products.

Between the four assayed extracts, the floral aroma and yellow color provided by the acacia flower extract were evaluated higher by all panelists, independently of gender or age. This ethanolic extract also presented the highest in vitro antioxidant activity.

As this article explains, flavor perception directly relates to the aroma compounds concentrated in the headspace above food before and during its consumption. As such, with the knowledge of flavor partition coefficients, the distribution of aroma compounds in the food matrix and toward the headspace can be calculated. Here, the authors combined static headspace measurements and modeling to predict the flavor partitioning of various flavor compounds—three esters, three aldehydes and three alcohols—above fat-free dairy protein mixture solutions containing different levels of sodium caseinate and whey protein isolate.

Proteins had a small pushing out effect, leading to the increased release of hydrophilic flavor compounds. This effect was negligible for hydrophobic compounds, where flavor retention was observed. This data was then run through a model of flavor partitioning in protein solutions to derive protein-flavor binding constants. The authors identified a clear power law between the protein-flavor binding constant and log P (octanol-water partition coefficient). Thus, the described model could accurately predict equilibrium flavor partitioning in dairy protein mixtures based solely on the octanol-water partition coefficients of the flavor compounds and the composition of the protein mixture.

In this work, the authors explored the properties and the flavor retention ability of a dried mungbean starch film formed in the presence of calcium ions under alkaline pH. Treating the starch in NaOH or Ca(OH) 2 solutions at a pH 12 was found to induce the formation B-type starch crystal.

Starch film made with Ca(OH) 2 was found to be more effective than NaOH for entrapping 1,8-cineole (5.07%), menthone (1.52%) and citonellol (30.84%). The physical entrapment of flavor compounds by alkaline-treated starch, along with the high-water solubility (24.4–46.7%) of Ca films, could help in designing novel-controlled flavor release systems.

Fragrances possessing a blooming effect are of high interest in the fragrance industry since, according to these inventors, this generally pleasant, surprising sensory effect signals a powerful perfume. It also provides the user an immediate sensation and can be considered as a signature fragrance accord in a perfumed product. Accordingly, there is an increasing demand for fragrances possessing a blooming effect.