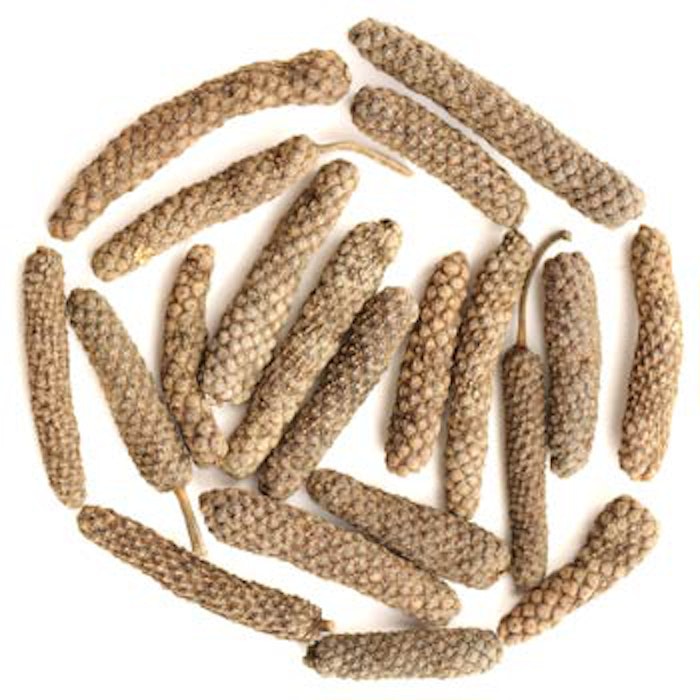 Long pepper, also known as Bengal pepper or Indian long pepper (pippali, peppooli, pipli or pipul in various Indian dialects), is obtained from Piper longum L., a member of the Piperaceae family that is endemic to the Indo-Malay region of Southeast Asia. It can be found growing wild in the Indian tropical rainforests. It is a perennial, dioecious, glabrous, slender vine or undershrub, which possesses simple, alternate wide ovate, cordate laves.

The female inflorescence is a cylindrical pedunculated spike, 2–5 cm long. The fruit are small, shiny ovoid berries ranging in color from green to gray to black and are embedded in the spike. Both the fruit and roots are widely used in traditional medicine (Zaveri et al. 2010), while the fruit are used as a spice (Manoj et al., 2004). In recent years, oils and extracts of long pepper have become minor products of India.

A survey of early literature revealed that Nigam and Radhakrishnan (1968) determined the fruit oil was produced in the laboratory by water distillation in 0.6% yield. They found the oil was devoid of monoterpene compounds and was rich in sesquiterpenes, with b-caryophyllene being the major hydrocarbon. Lawrence (1978) examined the composition of a lab-distilled oil of P. longum using both GC-FID and GC/MS. The constituents characterized in this oil are described herein, as are the findings of Shankaracharya et al. (1997), among others.