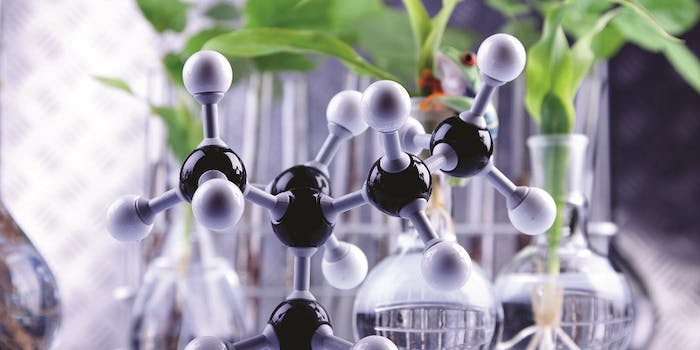 Non-naturally occurring fragrance compounds are frequently discovered by modifying the chemical structure of a natural occurring “parent” compound with a desirable fragrance profile, for instance, by replacing one piece of a molecule with a structurally different piece, to give a molecule with a completely different structure. Alternatively, new fragrance compounds can be identified by changing the way the components of a known molecule are put together, so that the resulting molecule has the same pieces, but the molecule has a different shape.

In chemistry, the relationship between compounds that have the same pieces but that are put together differently is known as isomerism. Since they have different shapes, isomeric fragrance compounds can have profoundly different fragrance profiles. The differences in fragrance profiles between isomers can have significant value to fragrance producers. Isomeric molecules additionally can be patentable if they meet the patentability requirements of being novelty, non-obviousness and having a real life use.

This article provides an overview of isomerism and describes some recent U.S. patents that claim non-naturally occurring isomeric fragrance compounds.

In chemistry, isomers are described as compounds that have the same molecular formula but that are put together differently so that they have different shapes. There are two types of isomers: structural isomers and stereoisomers.

In structural isomers, the connectivity of atoms in a molecule is different, as illustrated by the four fluorine-substituted odorants depicted below which are analogs of raspberry ketone. In the compounds, the fluorine (F) atom is located at different positions. These four structural isomers were found to have different fragrance profiles (see F-1).

It is easy to assume that molecules exist only as flat, two-dimensional objects, as represented by the raspberry ketone analogues depicted above. However, molecules are three-dimensional objects, and stereoisomers are molecules that are put together the same way but have different three-dimensional shapes. An example of “real world” stereoisomers are human hands. If you hold your hands in front of your fingers up and palms facing, the left hand is a mirror image of the right hand, and all the fingers line up in the same order from thumb to pinky. If you stack your hands one on top of the other, fingers forward and palms facing down, the fingers do not line up: the thumb of your right hand is roughly on top of the pinky on your left hand and vice versa. Thus, your hands are not superimposable.

Molecules can have this same characteristic of not being superimposable, which is known in chemistry as stereochemical isomerism (or stereoisomerism). It is not always easy to see how stereoisomeric molecules can have different shapes because of the way they are drawn. For example, the structure of carvone 6 is depicted below. Carvone is found in nature in caraway and spearmint seeds and has a mixed caraway/spearmint odor (see F-2).

There are two isomers of carvone: compound 7, also known as (+)-(S)-carvone, has a caraway odor whereas compound 8, also known as (-)-(R)-carvone smells like spearmint (see F-3). The molecules are connected the same way and look like carvone 6, but compound 7 has a dashed wedge and compound 8 has a bolded wedge at one position. Both the dashed and bolded wedges represent chemical bonds, and they let chemists know something about the location of these bonds in the three-dimensional structures of the molecules. If all of the other non-wedged bonds are in the same plane (say, the plane of this page), the dashed wedge means that the bond is pointed behind (or down) relative to those bonds. The bolded wedge means that the bond is pointed in front (or up) relative to those bonds. A mixture of 7 and 8 would be depicted as the completely “flat” carvone structure 6 provided above.

The difference between how isomers smell is a major reason why the fragrance industry is interested in developing, testing, patenting, and ultimately using various stereoisomers in perfumes and other fragrance products. Pure stereoisomers, or carefully tailored mixtures of stereoisomers, can provide the fragrance chemist with an infinite variety of new fragrances.

A number of United States patents claim non-naturally occurring fragrance compounds that are stereoisomers. These patents were granted because the examiners at the United States Patent & Trademark Office (USPTO) found that the claimed stereoisomers or their use met the patentability requirements of novelty, utility and non-obviousness.

By way of a brief background, an invention has to be new, have some identifiable use, and have some attribute that would be considered unpredictable, surprising or unexpected to a skilled person. In the context of non-naturally occurring fragrance compounds, a previously undisclosed non-naturally occurring stereoisomer fragrance compound would meet the novelty requirement. It would meet the utility requirement if it had an odor that you could put in a perfume or other fragrance product. It would meet the non-obviousness requirement if it had a characteristic that could not necessarily be predicted by a fragrance chemist or perfumer.

There are other requirements for obtaining a patent that should be mentioned. The patent also has to teach the public how to make and use the invention. To meet this requirement, a patent claiming a non-naturally occurring stereoisomer fragrance compound would be expected to show the process for how the desired compounds are made, example compositions containing the compounds, and how the compounds and compositions were tested. Teaching the public how to make and use the invention is the trade-off that patentees are required to make with the U.S. government in order to get a patent. A patent gives patentees the right to make, to use, to sell, and to exclude others from doing those things, for 20 years from the date the patentee originally applied for the patent.

As with other inventions in chemistry, it is usually relatively straightforward to demonstrate to a patent examiner during prosecution or to a court during a trial that a non-naturally occurring isomeric fragrance compound is new and has a use. A chemical structure search of the patent and scientific literature will tell all involved whether a compound is or is not novel. Tests and experiments, frequently included in the patent application, will show that the compound has a smell that can be used in a perfume or other fragrance product. In short, the major hurdle that a fragrance compound patentee faces in obtaining a patent is establishing non-obviousness. Eyes that have been trained to look at and analyze chemical compounds are quick to see any similarities between a patentee’s claimed compounds and compounds known to the public. This is as true in the field of fragrance chemistry as it is in pharmaceutical chemistry.

Three examples of issued U.S. patents claiming non-naturally occurring stereoisomer fragrance compounds or methods of using these compounds are described below. These three patents suggest that the road to a patent grant went through establishing non-obviousness.

The ‘319 patent owned by Firmenich relates to non-naturally occurring stereoisomers of the compound 9 depicted below, which is known as 1-isopropoxy-1-oxopropan-2-yl pivalate. Based on the discussion of carvone above, the “flat” structure of 9 means that it is a mixture of stereoisomers (see F-4).

The patentee noted that another patent application described compounds with structures similar to compound 9 that had fruity smells, whereas compound 9, and in particular the two stereoisomers 10 and 11 of compound 9 depicted below, had floral odors. According to the ‘319 patent, (-)-(S)- 1-isopropoxy-1-oxopropan-2-yl pivalate has “a floral, rosy/geranium type note having also a linalool, citronellol, geranyl acetate aspect, as well as a fruity, citrusy type note having lemon, bergamot aspects,” whereas (+)-(R)- 1-isopropoxy-1-oxopropan-2-yl pivalate has “an odor similar to the one of the S enantiomer but distinguishing itself by a slightly more pronounced fruity note and being less raising than the S enantiomer.” During prosecution, the patentee argued that it was totally unexpected that compounds 9 and 10 conferred a floral odor, given the fruity odor of the previously discovered compounds (see F-5). The granted claims are thus directed to a method of using 9 and in particular 10 to impart a floral note to a perfuming composition.

The ‘908 patent owned by Takasago International relates to a particular non-naturally occurring stereoisomer of compound 18. It was known that compound 17 had a strong sandalwood odor. The patentee subsequently found that compound 18 had a weak musk odor and subsequently discovered that mixtures of stereoisomers 19 and 20 had strong odors ranging from musky to a woody/fruity odor depending on the amount of each isomer in the mixture (see F-7). The patentee also found that pure samples of stereoisomer 19 had a “pleasant strong musk odor with good diffusability.” During prosecution, the patentee argued that it was totally unexpected that mixtures of stereoisomers 19 and 20 had a spectrum of musky/wood/fruity odors and that stereoisomer 19 conferred a musky odor, given the floral odor of similar compounds that were previously discovered. The granted claims are thus directed mixtures of the two isomers, as well as pure isomer 19.