A Lie that Tells the Truth: Chandler Burr Peeks Behind the Curtain of the Fragrance Industry

The Perfect Scent: A Year Inside the Perfume Industry in Paris and New York

In such an environment, Burr discovers, price pressures have escalated, damaging (in his view) perfumers’ creativity by collapsing the price of perfume formulae. “You used to easily see €230 per kilo, and then €150 per kilo, and now you got €38 to work with? It eliminated half your palette right now, the expensive stuff, the interesting stuff ….”

Burr sees the perfume world’s woes as largely self-inflicted. While the fragrance industry may share Hollywood’s marriage of creativity and commerce—and excess of mediocre launches—it has failed to follow the film industry in “pulling back the curtain” on its creative realities. Just as Hollywood publicizes how its special effects are rendered, Burr argues that honest insights into perfumes and their creators will only reinforce the magic of olfaction, not dilute it. It is, in short, a missed opportunity.

In one of the book’s most controversial passages, Burr strongly advocates for making formulas public, and, in fact, publishes the complete formula of an unnamed major feminine commercial luxury scent. Given the effectiveness of analytical equipment,* he notes, the secrecy is merely a relic of a pre-technical age. In addition, the author questions the industry’s public silence on the benefits and beauty of synthetic raw materials, which are not only aesthetically exciting, but often environmentally friendly in replacing endangered natural raw material sources—particularly in the case of sandalwood. After all, Burr concludes, perfumers don’t exist merely to mimic the natural world:

“… [Jean-Claude] Ellena wasn’t [at Hermès] to create nature. As an artist, he was principally an illusionist … ‘Picasso,” Ellena liked to say, ‘said, “Art is a lie that tells the truth” That’s perfume for me. I lie. I create an illusion that is actually stronger than reality.’”

It’s here, in his intimate reportage of perfumers’ creative philosophy and processes that Burr’s book shines brightest. Following the creation of Un Jardin sur le Nil from a loose concept (rivers) to a hastily sketched formula in Ellena’s notebook to expertly tweaked mods on a conference table—“The interaction of materials is more instinct than science”—to a finished fragrance, the author leads the layman with clear eyes through the invisible art of olfactive storytelling.

Says Ellena: “The most difficult sentence to write of any novel is the first.”

Have you read the book? We’d love to hear your thoughts at jallured@allured.com.

*Though estimates vary as to how much of a formula can be identified via “shooting the juice,” Burr cites figures as high as 99%. 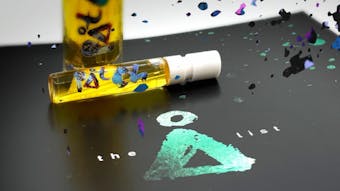