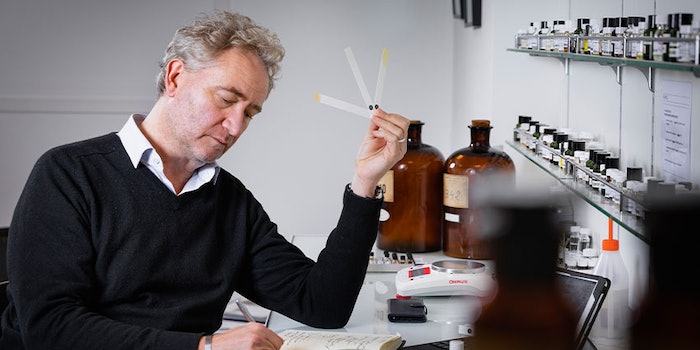 Perfumer Antoine Lie has been a venerable force in shaping both the aesthetic and philosophy of alternative and niche perfumery over the last decade and a half—arguably one of the most experimental and volatile moments in perfumery’s history. That he did this from within a big industry player, rising to vice president, senior perfumer at Takasago, is all the more impressive, bouncing between the mindset of artist and businessperson, winning global and local clients alike.

Rather like the crisis in identity and public confidence that jazz faced from the 1970s right through to today, influential actors in the artisan space are increasingly having to align themselves to one of two camps: either that niche is defined by certain olfactory styles and accord architecture, or that niche is bedrocked on a spirit of continual experimentation, exploration and research, with aesthetics that constantly oscillate with the headspace of the time.

Newly independent under the umbrella of his company, Antoine Lie Olfactive Experience, this interview studies Lie’s updated framework of where perfumery is right now, where it’s going and where it should be in the search for new smells and new ideas.

Eddie Bulliqi [EB]: What are the advantages and disadvantages of being independent?

Antoine Lie [AL]: The prime benefit of being an independent perfumer is to gain back time for projects that are meaningful to me, instead of dedicating most of my time to a management team that dictate your objectives to financial expectations, reducing perfumery to a standardized commodity. The system is a golden cage for perfumers, and I understand why perfumers feel very secure within it—I was there, and I was one of them! But within this cage, you just have to stay in the norms and do what you’re told. I became attentive to the decreasing quality and creativity in this industrial perfumery and was frustrated by an industry oppressed by standardization through consumer tests and decision-makers ruled by finances. Going through the system, what became important to me was going back to the roots of emotions and research into new natural smells and new ways of extracting from naturals.

The best thing about being independent is that you have the freedom to choose what you want to work on, how you work on it and with whom you want to work. Currently, I partner with two labs who share a common philosophy and set of values with me—that perfumery needs a change, and this should be focused toward quality and creativity, putting the perfumer back in the center of development. Of course, you’re not able to change the system when you’re in the system and, in truth, I don’t have the capacity to change things from where I currently sit, either. But at least I can propose something I strongly believe, respecting my sincere values.

[EB]: From an odor profile point of view, were there any scent categories or ways of working that you were itching to explore but were not allowed at a large house?

[AL]: To be honest, not really in terms of types of odor—for example, if I wanted to explore something unusual, like a mushroom accord, it’s not that I was told I wasn’t allowed, but our industry is oriented toward the short-term cash-back projects so they prefer you to spend a great deal of energy on producing more and more within common and known smelling fields, for more chances to win business. My vision was to gather a team of the best perfumers dedicated to exploring new families, new methods of extraction and new ways of working and collaborating with time at its essence—the results of this type of experimentation take time! Alas, this project never materialized.

The principle issue with our industry’s standardized format is that you are only ever working and thinking about what is popular right now, and no space at all is truly given to working on what may be popular in two, three, five years ... As a result, it’s almost impossible to make new disruptive classics in industrial perfumery, and uniformity dominates the aisles.