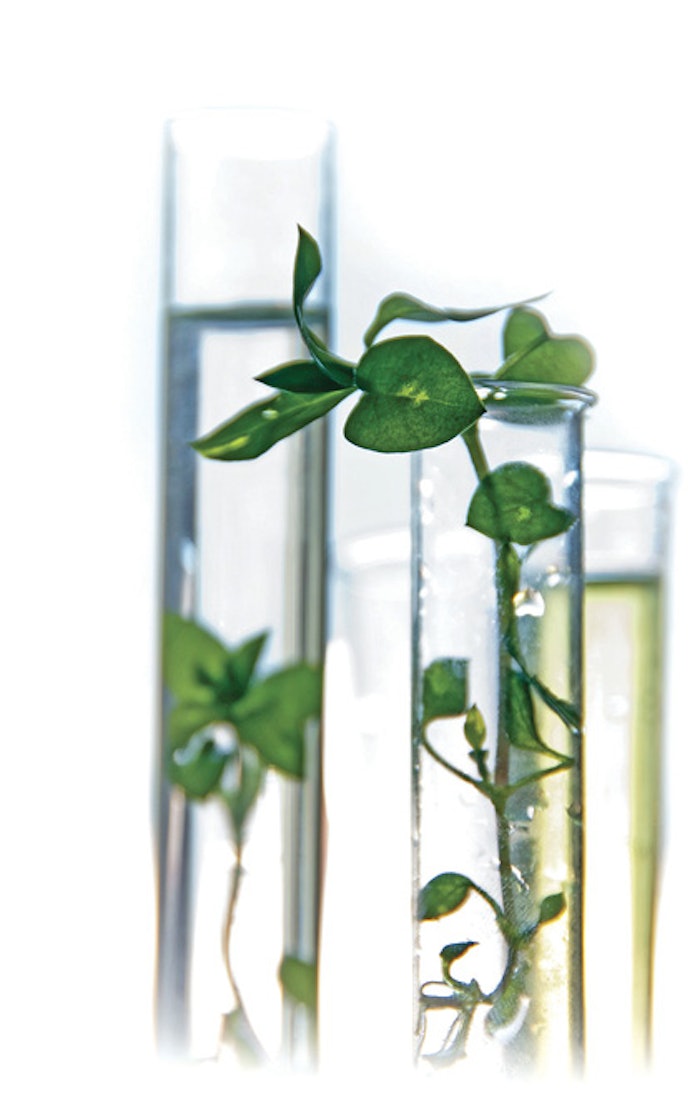 Scent lies at the intersection of chemistry, biology, creativity and emotion. With each breath, we draw in volatile molecules that interact with the olfactory receptors in our nose, transforming the chemical information into a biological signal to our brain. This translation of chemistry to biology allows us to sense one trillion different scent combinations,1 unlocking trillions of emotional memories.2

Perfumery is thus an art form that bridges the sciences of chemistry and biology; indeed, the history of these sciences is intertwined with the history of fragrance. The first recorded chemists were female perfumers. The names Tapputi-Belatekallim and ( )ninu—whose name is only partially legible, appear on four thousand year-old Mesopotamian cuneiform tablets.3 These women’s chemical expertise lay in their skill at extracting and distilling different fragrant fractions from biological sources, i.e., fruits, flowers, herbs, seeds, tree resins or animal musks.

Throughout the centuries, new techniques for extraction, purification and analysis of such complex biological mixtures linked the biological world and the art of perfumery with the science of chemistry. In the early 19th century, the chemist Friedrich Wöhler identified a method to synthesize the organic molecule urea, which until then could only be extracted from a biological source. This discovery unlocked a new era of chemical creativity and synthesis. Importantly, the molecules created included both those traditionally extracted from biological material, such as vanillin—one of the earliest synthesized F&F molecules—and compounds that never existed previously.4

This revolution in synthetic chemistry enabled creativity in perfumery to flourish. Perfumers were no longer restricted by the volumes, organoleptic properties or prices of molecules that could be extracted from plants. Jicky by Guerlain, created in 1889, was the first perfume mixing natural and synthetic ingredients; in particular, steam-distilled lavender with chemically synthesized vanilla notes.5 The synthesized vanillin provided a powerful overdose of vanilla—a perfect counterpoint to the fresh, herbaceous lavender note—and this contrast defined that fragrance as the exhilarating start of modern perfume composition.

Today, new science is once again uniting biology and chemistry through the art of fragrance. Biological engineers are creating fragrances not by mixing chemicals, but by mixing genes. Like Tapputi-Belatekallim and ( )ninu, producers of these new cultured fragrance ingredients begin with biological materials known for their scents. However, rather than extracting fragrance compounds, biological engineers extract DNA and use the sequence to understand how its enzymes produce volatile fragrances.

These DNA sequence encode scent-producing enzymes that can then be engineered into microorganisms such as yeasts. As the yeasts grow and ferment, they convert sugars into the desired molecules, which can then be extracted from the culture medium (see F-1).

Fermentation by microorganisms has been used to create foods, beverages and bulk flavor molecules, e.g., acetic acid, for millennia. It wasn’t until the early 20th century that chemists and microbiologists were able to study the biochemistry of fermentation. The first comprehensive review of volatile microbial aromas6 was published in 1923, which outlined how different classes of microbes contribute to the rich flavors of prized fermented foods such as beer, wine and cheese. By the second half of the 20th century, microbes were being used as biocatalysts in the production of flavor compounds, including vanillin from eugenol or ferulic acid.7 By the 1990s, de novo biosynthesis of fragrance molecules by engineered microorganisms moved closer to reality.8

In recent years, advances in DNA sequencing and synthesis technologies have decreased the costs and technical risks associated with developing novel biosynthetic processes, enabling a bloom in the production of cultured ingredients. Today, there are a handful of such ingredients on the F&F market or in final stages of development. These include the brands Clearwood and Ambroxa; vanillin, valencene and nootkatoneb; and lactonesc. For a more comprehensive list of ingredients produced by fermentation, see Shetty 2013.9

These cultured ingredients provide numerous benefits for the industry; from improved economics and a lower impact on the environment from sourcing raw materials, to novel organoleptic and performance properties.8 The Clearwood ingredient, for example, won first place for innovation in 2015 from the SEPAWA detergent, cosmetic and fragrance association for the ingredient’s “sustainable nature, versatility as a perfume ingredient and unique olfactive profile.”10

The stabler and more sustainable sourcing of ingredients has benefits beyond economics as it impacts the palette available to perfumers and flavorists, in turn enabling new kinds of creativity. This is especially true for exquisite but rare, expensive and unsustainable ingredients for which cultured alternatives are currently being developed—namely saffron, sandalwood, oud and many more.11-14

Tapputi-Belatekallim and ( )ninu were chemists as well as perfumers. In the 19th century, the two roles were interconnected but had become separate vocations; chemists were not directly involved in crafting perfumes but they enabled creativity in perfumery by producing high-impact molecules at a low cost. Today, biotechnologists continue this tradition, adding newly cultured ingredients to the perfumer’s palette.

The creative power of biotechnology, however, is not only in providing ingredients, but in collaborating with artists to explore new opportunities. Artists who bring their visions directly into the lab will return to their studios with a deeper understanding of the science that can challenge, inform and infuse their art. It is at this intersection of art and science where new creativity erupts. In fact, at this year’s World Perfumery Congress, held June 13-15, 2016, in Miami, the author’s company will highlight artistic projects pointing to new opportunities for biotechnology and fragrance. Following are three examples.

Techniques for the extraction and sequencing of DNA have dramatically improved in the past few years. Today, the genome of several extinct species has been sequenced, including mammoths15 and Neandertals.16 Researchers studying the evolution of plants have sequenced plant DNA from frozen permafrost17 and from plants preserved in herbaria18 that have since gone extinct. Working with such preserved plant DNA sequences can reveal the genes responsible for creating the scent of extinct flowers, which can then be resynthesized. Of course, the scent would not be made by the flower but by an engineered yeast that has the floral DNA incorporated into its genome.

To truly capture the scent, however, would require as much art as science. While the DNA sequence can give the identity of the volatile molecules, it is unlikely to yield the exact ratios of the molecules that gave the flower its olfactive quality. Crafting the final scent would require collaboration between perfumers and biologists.

Such collaborations open up other new opportunities. The same technology could be applied to other rare or difficult to access fragrances, such as flowers that grow only in isolated places and cannot be cultivated; essential oils that cannot be extracted; and extracts that traditionally have been farmed or harvested unsustainably.

Just as microorganisms are involved in creating the flavors of fermented foods, microorganisms that live on our skin contribute significantly to the smell of the human body. In 2014, a group of biology and design students from the Center for Research and Interdisciplinarity in Paris re-engineered common underarm skin bacteria19 to prevent them from producing the molecules responsible for body odor. This prototype “living deodorant” points to a new paradigm for fragrance—perfumes designed not only for how they wear on skin, but for how they interact with the skin’s microflora. Perhaps the bacteria living on the skin will themselves be re-engineered not just to prevent the production of malodor, but also to actively produce fragrance molecules.

Like the extinct flower, this project is driven by new advances in biological science—notably the revolution of understanding around the human microbiome—but is grounded in creative product design. Artwork and prototype products inspire and complement advances in the science, creating space to spark new ideas.

Lucy McRae is a science fiction artist and “body architect” whose work explores connections between health, beauty and technology. Working with Sheref Mansy, a biologist studying protocells—i.e., chemical compositions that have some behaviors of living cells, McRae developed her “Swallowable Parfum” concept. Perfume capsules would be developed so that as they are digested, fragrant molecules would be excreted through the skin. Thus, the skin “become[s] a platform, an atomizer, a biologically enhanced second skin synthesized directly from the natural processes of the body.”20 This idea is said to “signal a new cycle of evolution, enabling human skin to emit a genetically unique scent about who we are and how we perform our identities.”

This swallowable fragrance is still a fictional concept, driven first by art and then science. However, although there are specific challenges to such a product, other scientific projects have been inspired by this work. For example, the use of different chemical compositions to influence the smell of sweat.21 Thus, artistic concepts can influence new directions in scientific research, which in turn can enable new creative potential.

Biologists, engineers, artists and designers are imagining many new directions for consumer biotechnology. Cultured ingredients have already made a lasting impact on the palette available to perfumers and flavorists—and the market for ingredients produced by designed yeasts will continue on a steady growth trajectory over the next several years. Beyond cultured ingredients, collaborations between art and science have enabled the creative vision for new, bio-inspired fragrance paradigms.

7. Hagedorn, S. and Kaphammer, B. Microbial biocatalysis in the generation of flavor and fragrance chemicals. Annu Rev Microbiol (1994).

Today, new science is once again uniting biology and chemistry through the art of fragrance.

Today, new science is once again uniting biology and chemistry through the art of fragrance.