Frankincense and Myrrh and Its Socio-Economic Impact 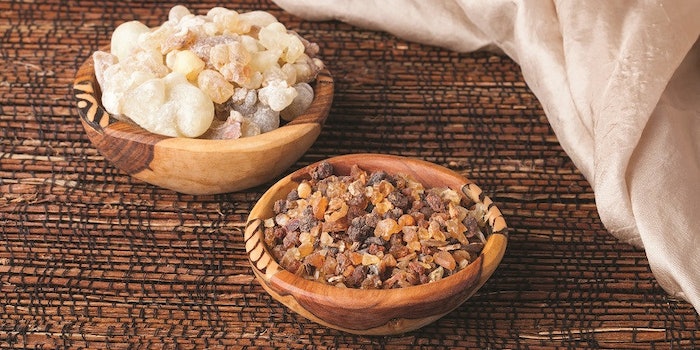 *This report was published from the Socio-Economic Reports compiled by the International Federation of Essential Oils and Aroma Trades (IFEAT). The research for this report was conducted in 2016/17 and published in IFEATWORLD in July 2017.

Both frankincense and myrrh (F&M) grow as small trees or shrubs; they are both of the botanical family Burseraceae. Frankincense (also called olibanum) is classified as belonging to the Boswellia genus, while myrrh is obtained from trees of the Commiphora species. The nomenclature of these products is both complex and confusing. Thus, there are numerous species and varieties of F&M trees, each producing a slightly different type of resin.

Differences in soil and climate create even more diversity of the resin, even within the same species. The primary species relied upon today are Boswellia carterii (Somalia) and Boswellia papyrifera (Ethiopia) for frankincense and Commiphora myrrhae for myrrh. Robert S. Pappas argues that frankincense should also be classified by chemotype as well as species and discusses the five main chemotypes that encompass the five main species.1

Political instability, combined with geographic isolation and the nomadic nature of much of the collection area, makes it almost impossible to get accurate data. According to A. Y. Farah, officials of the Frankincense and Gums Development and Sales Agency reasonably estimated that the number of families in northern Somalia alone that primarily depend upon incense gathering is around 10,000 and the occurrence of commercial frankincense, “is absolutely crucial to the subsistence of a large number of the regional population.”2 More recently, in 2013, Zahra Osman Guelleh of Neo Botanika (Somaliland), a trader in aromatic gums and resins and their essential oils, stated that: “For many villagers, the collection of gum often represents their only opportunity to earn cash and this is particularly important for the financing of significant events such as weddings, funerals or for the purchase of food stocks.”

Most resin (whether F or M) is obtained either by collecting the exudate or more commonly by the tapping of wild growing trees. Tapping involves making deliberate incisions into the bark of the tree. The resin is left to exude from the tree and harden for a few days. The collector then returns to collect the hardened gum and re-mark the tree for more gum to start exuding. Resins are usually collected every 10 to 15 days.

F&M is predominantly a traditional trade undertaken by nomadic communities and networks that has been in existence for thousands of years. Tapping is done by traditional means by indigenous communities, including local farmers and villagers, with nomadic traditions and is often undertaken alongside other activities, including herding. Collection is, at times, carried out by pastoralist peasants who include poor members of the community, women and/or children, as they collect water and wood fuel or tend small stock or by organized tappers/collectors. It is not an organized or agricultural type of harvesting, but rather a wild craft method.

The collection of the resin occurs at a particular time and season, varying between regions. The gum activity is concentrated during the very low vegetative activity period when the trees have no leaves. Tapping occurs during the dry season from trunks and branches. The particular details of the tapping, such as the time of year it is undertaken, its duration, and the interval between individual tapping, varies according to the species and the customs in the area of production. For example, in Somalia there are usually two periods when Boswellia is tapped, each lasting three to four months, involving successive tapping at approximately 15-day intervals, with the timing of the tapping periods dependent upon the onset and extent of the rains.

* Paper presented at IFEAT Dubai Conference Sept. 25-29, 2016, “The Middle East: Challenges at the Historical Crossroads of the F&F Trade