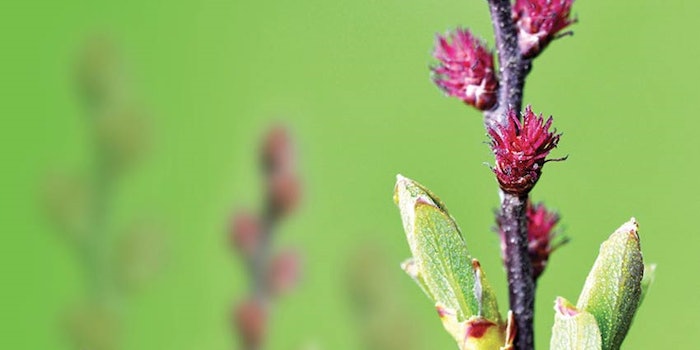 Myrica gale is a 1–2 m high deciduous flowering shrub with sweet, resinous, aromatic foliage that can be found typically growing in acidic peat bogs in northern and western Europe, particularly Scotland, Finland and parts of North America. Myrica gale grows well in less fertile soils because there is a symbiotic relationship between the plant and an endophytic nitrogen-fixing fungus (Simpson et al. 1996). In the 16th century, the leaves were commonly used in a mixture with so-called wild rosemary (Rhododendron tomentosum [Stokes]) H. Hamaja (syn. Ledum palustre L.) known as fruit as a flavoring for beer (Behre, 1983). Even though the leaves, catkins and fruit are aromatic, M. gale is grazed by sheep, goats, cattle and deer. The leaves have also been used as a traditional insect repellent (Simpson et al. 1996). An oil is occasionally produced in Canada and in northern European countries by steam distillation of the leaves of Myrica gale L. (syn. Gale palustris A. Mev.).