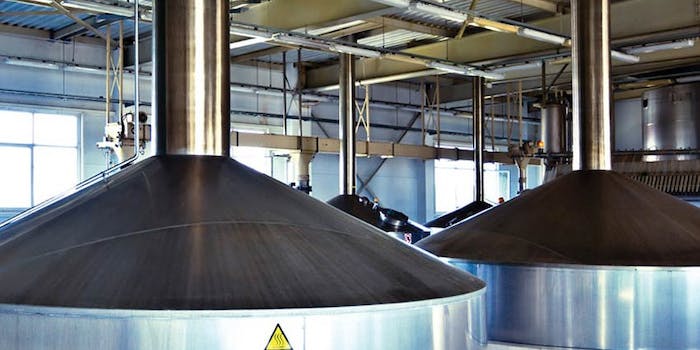 Collaboration with microbes is essential to nutrition, across all kingdoms of life. Microbial communities share metabolic resources, depending on each other to survive in harsh environments; plants exchange carbon and nitrogen with soil microbes living along and inside their roots; insects harvest microbial communities in complex symbiotic webs.

In our own bodies, microbes produce a number of cofactors and vitamins, including vitamin B3 (niacin), B5 (pantothenic acid), B6 (pyridoxal phosphate), B7 (biotin), B9 (folate), B12 (cobalamin) and vitamin K[1]. But despite being produced inside us, these vitamins—along with many others—are also an essential part of our diet, leading to potentially fatal deficiencies if left untreated. A balanced diet is enough for most people to get all the nutrients they need, but there are many situations for which supplementation is necessary. For those cases, we can turn to microbes for the large-scale production of micronutrients for supplementation for pharmaceutical, food or animal feed applications.

Cobalamin (B12) is a particularly interesting case. While it is produced in the large intestine by a number of bacteria, very little is absorbed by the host, as the cobalamin receptors responsible for uptake of the vitamin are found in the small intestine (ruminant animals or animals practicing coprophagy can therefore reabsorb some of the cobalamin that would otherwise be lost in feces) [2]. Moreover, cobalamin is an essential nutrient for other bacteria, so it is taken up rapidly in the gut by other non-producing members of the microbiome [2]. Cobalamin is also peculiar because it is not produced or used by plants, so vegans are particularly at risk of B12 deficiency. In humans, cobalamin is essential for the function of two metabolic enzymes and deficiency can have wide-ranging effects.

As a supplement for human or animal nutrition, or as a medical treatment for pernicious anemia—an autoimmune disorder that limits the uptake of cobalamin in the intestine—the vitamin has been produced industrially via microbial fermentation for decades [3]. Cobalamin is the most complex cofactor in nature—a cobalt corrinoid compound produced in bacteria and archaea by 30-enzyme biosynthetic pathway. A route to complete chemical synthesis was completed in the 1970s, but with over 70 steps biological production is more tractable and cost effective.

Today, vitamin B12 is industrially produced through fermentation almost exclusively in the bacteria, Pseudomonas denitrificans, and to a lesser extent, Propionibacgterium freudenreichii [4], which is the bacteria used in the production of Swiss cheese, another source of B12. Optimization of the fermentation medium and downstream processing have improved the yields of cobalamin from the fermentation process, as have mutagenesis, selection and genetic engineering techniques for the overexpression of biosynthetic enzymes. Little published data are available on industrial production strains, but it is believed titers as high as 300 mg/l are possible for optimized P. denitrificans strains and processes [3,5]. As techniques for genetic engineering and fermentation process design improve, titers go up and costs go down, enabling new opportunities for the innovative production of nutritional actives.

This detailed anecdote about cobalamin is not intended to inspire you to take B12 supplements, but to show how microbes and biotechnology are playing an ever-increasing role in the production of a wide number of vital compounds. These cultured ingredients [6] produced by genetically engineered microorganisms are making an impact in food and nutrition, flavor and fragrance, and cosmetics and personal care, among other industries. For nutritional actives, fermentation is essential for the economical production of industrial scale micronutrients for over half a century. New genetic engineering techniques are making it possible to produce more and more chemical-derived synthetic compounds through biological routes.

Besides cobalamin, several other vitamins are currently produced at industrial scales through fermentation of wild and genetically engineered microbes (see T-1). Complex cofactors like cobalamin, where the fermentation-based route is the most cost-effective and efficient method of production, since the beginning, biotechnological routes for nutritional active production have had to compete directly with chemical synthesis.

For vitamin B2—riboflavin, a necessary precursor of the metabolic cofactors FAD and FMN—the biosynthetic route and microbial producers were known as early as the 1940s, but chemical synthesis remained the dominant method for industrial production until the end of the 20th century. Decades of strain and process improvement, including mutational screening and genetic engineering, enabled the biotechnological process to overtake the efficiency of the chemical process by the turn of this century [7].

Amino acids are the building blocks of life, 20 compounds chained together make all the proteins that structure cells. Nine of these compounds are essential in humans and animals—not produced by animal metabolism, they must be ingested through the diet. Historically, amino acids used in food, pharmaceutical and industrial purposes were purified from plants or other sources of hydrolyzed mixed protein, but as the market for bulk amino acids expanded in the 20th century, so did the need for a fermentation-based route to large-scale production.

Glutamate was the first amino acid to be produced through fermentation, after it was discovered the bacteria, Corynebacterium glutamicum is a natural overproduced [19]. Today, significant volumes of glutamate are still produced through optimized strains of C. glutamicum, then converted to the well-known, though misunderstood, flavor-enhancer monosodium glutamate—MSG [20].

C. glutamicum is also used to produce lysine, the second largest volume amino acid produced after glutamate [18]. Many cereals are relatively deficient in lysine, making purified lysine a vital addition to animal feed formulations. Engineered Escherichia coli are used to produce two other key feed amino acids—threonine and tryptophan. The exception is methionine, which is also a limiting amino acid in animal feed, but is currently still produced at large scale via chemical synthesis, because the racemic mixture produced through organic chemistry can be readily converted to the bioavailable L-form via native enzymes, rendering one of the key benefits of biotechnological production of bioactives moot.

Improvements in fermentation technology and genetic tools over the decades have increased the scale and optimized titers for these important industrial fermentations for the largest volume amino acids. New tools emerging today in biotechnology may continue to make these processes more efficient, cost-effective and sustainable.

These omega-3 fatty acids have become valuable supplements, particularly for infant nutrition because of their association with neural and visual development. Much of the DHA produced industrially is fermented by the non-photosynthetic dinoflagellate, Crypthecodinium cohnii. The cell’s oil content after fermentation is over 40%, and 40% of that total oil is DHA [16]. For use in infant formulas, the omega-6 fatty acid arachidonic acid (ARA) must also be supplemented to prevent DHA from being converted into EPA. ARA is also biotechnologically produced in the fungus, Mortierella alpina, which naturally has a fatty acid content at nearly 80% ARA [21].

Producing purified EPA was proven more challenging because no natural sources of EPA-rich oil as the sole poly-unsaturated fatty acid exist. EPA was purified from fish oil at high economic and environmental cost for use in fish feed and medical applications. A biotechnological route to EPA was more recently commercialized by DuPont, where the oleaginous yeast, Yarrowia lipolytica was genetically engineered to produce oil at 57% EPA. The primary commercial application of this cultured EPA has been in fish feed for salmon aquaculture [16].

Beyond what microorganisms can produce when isolated in large fermenters, there has been significant recent interest in the value of probiotics and prebiotics in gut health and nutrition. We collaborate with the microbes living in our bodies unconsciously, noticing them only when something goes wrong. Increasingly, we are collaborating with microbes for nutrition consciously, designing new strains and new fermentation processes, which enable the large-scale cultivation of key nutritional compounds.

Recently, tremendous interest focused on the value of probiotics—living microbes with the ability to be ingested to have an effect on health—and prebiotics—ingredients indigestible by humans, but may modulate the population of microbes in the gut; for example, certain oligosaccharides shown to modulate the gut microbiome at a genus level [22]. Much of the promise of the microbiome still remains in the future, but new tools in genome sequencing, biotechnology and fermentation are enabling powerful new research and development into key probiotic strains and valuable prebiotic compounds.

The growth of industrial biotechnology during the 20th century had fundamental impacts in nutrition and our understanding of biochemistry and physiology. In the 21st century, new biotechnology tools and techniques will enable new understanding of key nutritional actives and new perspectives on how we might collaborate with microbes in the future—as vital parts of our bodies and our industries.