Intoxicating Jasmine: There’s No Substitute for the Real Thing 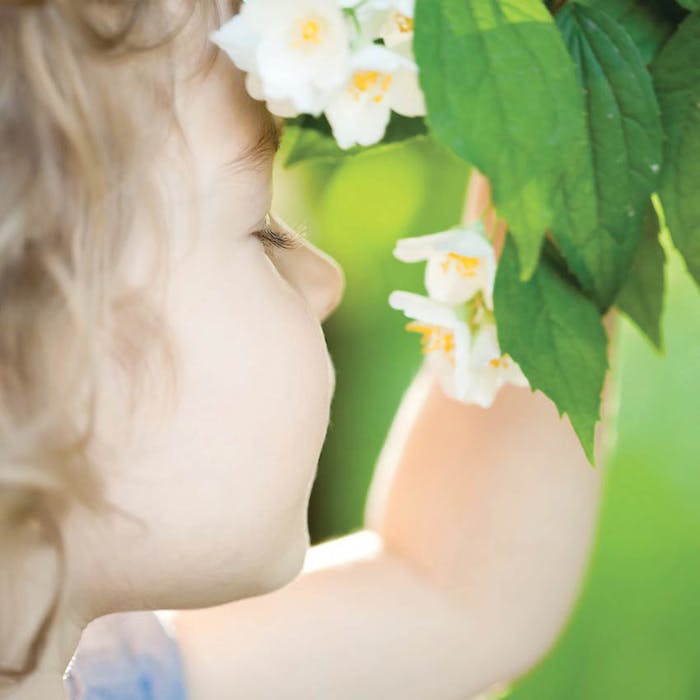 Jasmine absolute does not smell like the flower. Why is this so? To find out, methylene chloride extraction of the blossoms directly from the plant was carried out, revealing significant differences in component percentages—in addition to previously unidentified components. What these differences mean to the overall profile and natural character of the flower are discussed, in comparison with commercial jasmine sambac absolute from India.

Hundreds of components have been identified in the absolute, some of them spectacular with regard to character and performance, giving the beautiful aroma and powerful lure of intoxicating jasmine blossoms. This is a perfect example of art and an appreciation of natural beauty driving science, which is a different type of natural beauty.

But why does the absolute or synthetic reconstitution smell so different from the flower? We tend to assume that either the natural extract contains materials that are not available commercially, or we have not yet discovered the magical ingredient that imparts the missing element or character. The answer is never as simple as the question and it is often a combination of things—or the answer to the correct question, which has not yet been asked.

While nature has been my best teacher, I find it is best visited over and over again; plus, it is always difficult for me to pass up an opportunity to do first-hand extraction of botanicals, to unlock the secrets of nature. This prompted the current study.

Does the Absolute Represent Flower Constituents?

Direct botanical extracts yield not only a significant difference in components, but more markedly, their amounts and proportions. Having examined many botanicals, leaves, spices and fruit peels, as well as flowers, I have found this consistently to be the case.

This latest work was an opportunity to examine the jasmine flower freshly extracted in methylene chloride while still on the vine—i.e., before the blossom was cut—then analyzed by GCMS. Two distinct species were examined: star jasmine (Trachelospermum jasmineoides) and Jasmineum sambac, a specific Grand Duke of Tuscany cultivar (see F-1 and F-2). T-1 shows the aroma elements of each; T-2, the analysis; T-3, a comparison of major differences; and T-4, class representations. A specific basic odor contribution to each component was also assigned, along with the percentages found in each oil or extract.

It is interesting to note the differences in materials like veltol, which has not previously been reported in any jasmine analysis, and the existence of phytols in large quantities in the commercial oils, which were not detected in the live flower extract. Also vanillin, while reported rarely in jasmine, does not appear regularly in analysis. These findings were confirmed three times using a new column, syringe, septa and liner. What might this mean?

In the cases of veltol and vanillin, these are likely due to the type and nature of the commercial extract. Using hexane, a non-polar solvent, for the first step does not efficiently extract any appreciable amounts of polar compounds such as vanillin or veltol—or any other similarly polar compounds like phenols. Furthermore, the second step is to eliminate the non-odor contributing waxes, which are present in high amounts in the petals. Add this to the inefficiency of hexane to extract polar compounds, and any veltol, vanillin or other polar compound is not evident or below a normal detection level—and it is my contention that these compounds are critical to the overall flower aroma.

Also uncovered here in the methylene chloride botanical are phenols and substituted phenols that were not previously found, or found at only trace levels, in commercial absolute extracts. Again, this is primarily due to the physical nature and solubility of polar components in a non-polar solvent. It is worth noting that with steam distillation, amounts of polar ingredients are also likely to be lost in the water layer; and once again, it is my contention that the percentage and proportions of ingredients in the total flower extract play a critical role in the overall character. The amounts of ingredients can also be skewed, as is seen in the level of cis-3-hexenyl benzoate, present in the sambac example.

After the basic foundation and accord is balanced as closely as possible to the percentage and proportions as they exist in the blossom, the phenol section can play a crucial role. This is what brings the flower to life. While lactones are an important part of the foundation, the presence of vanillin and veltol extend and enhance the creamy aspects of jasmine. Green notes from various hexenol and esters supply the natural and fresh, grassy, vegetation aspect, which does not overpower but enhances the natural floral notes present.

The most striking difference between the star jasmine and sambac is the high percentage of phenyl acetaldehyde. At approximately 6.0% by area normalization, it is the most significant character contributor. Yet, while it is an extraordinary material, it is also highly unstable and volatile. To my knowledge, it has never been found at such a high percentage in any extract. Interestingly, subsequent analysis of the oil just 30 days after extraction showed a significant reduction in this percentage, which could be due to the solvent/extract difference as well as the stability of the molecule itself. It seems that methylene chloride is a great solvent for extraction, but may not be commercially practical nor environmentally feasible.

Additional differences in concentrations are apparent from T1-4. Indole and methyl anthranilate, for instance, lay a critical and important foundation but they are not the only story. The amount of cis-3-hexenyl benzoate at 17%, as opposed to ~10% in commercial jasmine absolute, provides a floral and somewhat leafy body to the overall profile. Of course, the concentration of one item affects the percentage relationship and performance of all the other components.

Close, but No sambac

As stated, building fragrances is about balancing the basic foundations and structures—and it’s just as important to not add the wrong components. Understanding the character and performance of ingredients in a blend requires tens of years of practice. It is not a single note that makes the difference, but how each perceivable note interacts with one other. This is true of many disciplines including music and art.

Combining roles as scientists and artists, perfumers have the luxury of examining individual components and evaluating the characters they contribute, for example, to the overall jasmine odor profile.

I have studied many natural essential oils and absolutes, and this is always a great starting point since you can learn a good deal about perfumery from them. However, it is easy to be misled into thinking commercial extracts are accurate representations of the actual botanicals. This is clearly not the case. The original hexane/alcohol absolute product is still beautiful and useful. Just not representative of the actual flower.

I have spent the last 30+ years examining fresh botanical extracts from plants, flowers, leaves and spices including geranium, basil, clove bud, cinnamon and nutmeg; flowers like Clethra alnifolia (ruby spice), Viburnum carlisi, autumn olive (Eleagnus umbellata), petunia, lilac and lily; and a variety of citrus peels and juice—most recently Mandarin, where primary amines were discovered and reported for the first time, among other components. Experience has convinced me that as long as we continue to look, we will find something new and different. And in perfumery, it is not just a question of what is present, but what else is present and at what level.