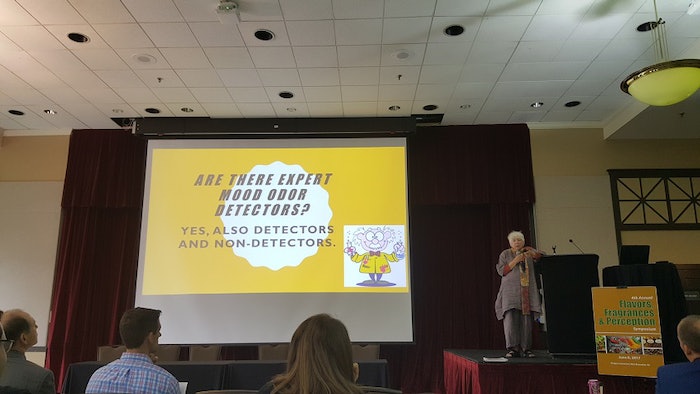 The fourth annual Flavors, Fragrances and Perception Symposium at Rutgers University on June 8 focused on sensory studies, neuroscience, psychology, consumer testing and new developments that can offer insight to the flavor and fragrance industries as a whole. The highlights of the day were as follows:

Who Smells Better - Animals or Humans?

As part of the keynote address for the symposium, John McGann, Ph.D., an associate professor, department of psychology at Rutgers University, spoke about historical olfactory research, psychology and the brain, and addressed common questions related to these topics. Specifically, one of the historical examples McGann provided were observations made by French physician, Pierre Paul Broca, who examined the brain in different species and was intrigued by the size of the olfactory bulb of a mouse as compared to a human. “He was really struck by how tiny the olfactory bulbs were," McGann said.

Further, McGann explained that Broca mistakenly classified humans as "anosmatiques" (non-smellers), because of the small relative size of the human bulb and because he believed humans had free will. "This classification was not owning to any sensory testing," McGann added.

Therefore, when considering if we should worry about the relative size or absolute size of the human olfactory bulb as compared to the one of the mouse, McGann said that evolutionary theory has settled on basic rules of brain scaling: "brain region sizes are correlated with each other and scale up and down with brain size across species ... except the olfactory regions."

Does having only 390 odor receptors limit humans to a narrow range of possible odors? No, according to McGann. He said human odor discrimination is excellent and referred to a study by Bushdid et al. in 2014 which said humans can detect more than one trillion odors.

In conclusion, since humans have a hugely complex cerebral cortex to interpret and shape olfactory signals, and odors exist within a contextual semantic network, this probably adds distinctively to the human richness and meaning to odors, McGann said.

According to Simons, testing methods are not engaging. In his study, he found that using immersive technologies will improve the ecological validity of hedonic testing conditions that produce more discriminating and reliable consumer data.

However, most noteworthy: “We found the testing environment impacts preference order," Simons said. "Coffees were preferred differently in two environments and Starbucks & Stauf's were consistent with coffeehouse theme," Simons said.

In other words, people who taste-tested in the virtual coffee house environment preferred brands that were traditionally served in the coffee house environment. Another study involved immersive technologies and the tester's ability to recall certain aspects or cues about the product. Ninety percent of panelists recalled visual aspects, 82% recalled auditory aspects and only 26% recalled olfactory aspects.

These findings Simons said, offer insight over the appropriate context and environments for evaluating products and consumer studies.

Aromas and Mood: the Fragrance Pathway

On a similar note, Rachel Herz, Ph.D., from the Department of Psychiatry & Human Behavior at Brown University Alpert Medical School, discussed during the symposium how odors bring back emotional memories and instantaneously trigger emotional states.

"When there’s a smell that is triggering a memory, the memory experience feels more viscerally involved," she said. "Odors can bring back memories that which would otherwise not be recalled (if they are linked to one event). Suddenly when you have that unique re-exposure, you get that memory back."

Herz noted studies revealed memories that were triggered by odors were more mostly pleasant. Also, the first associations with scent are closely and tightly connected, she said. So if one has a pleasant memory eating a particular food from childhood, the smell will trigger that pleasant memory. It only works if you have a positive association with that scent, she added.

"Whether we like or dislike an odor is due to the past experiences we have had with it and what emotions were involved," said Herz.

Further, she noted studies where ambient odor made a positive impact, such as in a dental office. They found an orange aroma promoted a state of calmness that improved mood more than music. Also, peppermint has shown to improve energy in tests of physical performance as well as improve performance on difficult and cognitive tests (Ho & Spence, 2005).

In summary, Herz said through association with emotional experiences, the hedonic perception of odors can be changed accordingly. Odors elicit more emotional, evocative and pleasant memories than any other sensory cute.

Lee, in speaking about consumer insights and challenges, said it is challenging working with a lot of active ingredients. "We, as a flavor group, we have to make sure the product is a good tasting product. We are constantly trying to see how to modulate tastes and create these great consumer experience," Lee said.

Meanwhile, Gaier spoke about the health food sector, which he said is both expensive and competitive. Plus, "they must taste as good as any other product. That is a very difficult challenge for us," he said.

Blatt also commented that consumers are hungry for innovation in a way that we have never seen before. "Consumers are looking to connect with the products and the brands they use in a very authentic way. They are also looking for brands with purpose, brands that represent them ... they are very knowledgeable," he said.

In the marketplace, one has to have a very efficacious product that the consumers can see the product is working and the taste has to really connect, Lee said. "If the product doesn’t taste good, then the consumer is not going to buy it," she added. Also, emotions play a big role in selecting the flavor that you put in your products, according to Lee.

For coffee, it is all about taste, Gaier said. For healthcare nutrition products, the substantiation of any claim you have is key, and only then comes taste. "This is what we sometimes struggle with (with taste). Sometimes they talk about having good taste in the products, which is becoming increasingly important. But still, what is most important is substantiating claims," Gaier explained.

When speaking about innovation, "from early research to product development and we talk about flavors we need those signals that the product is working," Lee said. "We rely on external partners like flavor houses that can help us with sensates. We are constantly contacting those partners to help us in what we need to achieve with flavor."

Are there Mood Odor Detectors?

Jeannette Haviland-Jones, Ph.D., professor emirita, department of psychology, Rutgers University, found that there are people who can be experts at detecting mood odors according to a recent trial.

When evaluating expert sniffers of chemically unknown semiochemicals, Haviland-Jones and her team collected "mood odors" of fear and happy associated with underarm samples.

They found out that 32.52% of their evaluators could detect these mood odors, but there was no particular pattern even though they could distinguish fear from control and happy from control. Halivand-Jones defined these certain evaluators as "superdectors," meaning they had the highest ability to detect "mood odors" from control. Half of the evaluators, could get a 15/15 out of an "I don’t smell anything trial."

As a follow up study, Haviland-Jones said certain questions remain such as: Can mood detection be learned? And is this explicit detection more related to emotion reactivity or emotion management?

"This raises more questions; we have a lot of questions when someone comes to me and asks, 'can you do an expert panel?'" said Haviland-Jones.

When looking at the questions regarding sensory and flavor and nutrition and health, the overriding themes that are in the lab of Cordelia Running, Ph.D., an assistant professor for the department of foods and nutrition at Purdue University, are that good medicine tastes bitter.

Running says "there's this idea that things that are good for you often do have bitter or bad effect to them when we experience them. I believe food should taste good," she said.

For this reason, Running is examining oral sensations of taste and texture and how fat may actually have taste as well. She calls this "oleogustus," from the Latin words fat and taste. Running noted that fatty acids stimulate a sensation through taste cells and the sensation differs by chemical structure. "The isolated sensation is different from other tastes and from what we typically think of as 'fattiness,'" Running said.

Fatty acids are cleaved from triglyceride. In humans, exposure to oral fat influences blood triglycerides and the detection is based on molecular structure, not texture. Fatty acids mix into saliva and enter the taste pore. The fatty acid activates receptor and the taste cell depolarizes. This interacts with the neighboring cells to send a signal to the brain. Running's team found that short-, medium- and long-chain fatty acids taste different.

“We thought, 'maybe people think fatty acid taste is bitter.' And what we found is that actually people are pretty good at distinguishing the fatty acid compounds from the bitter compounds," Running said.

People in testing said the fatty acids were a bit bitter, but a different kind of bitter, according to Running. Her team found that low levels of oleogustus enhanced liking and that higher levels, indicative of rancidity, reduced it. The shorter the chain and the more unsaturated they are, the more potent and intense the taste would be. They also found that the taste of olegustus is not pleasant in isolation, or in food. Polyunsaturated fatty acids have the strongest evidence for health benefits, Running noted. They also are the most potent strong oleogustus stimuli. Therefore, to understand olegustus' role in flavor, we need to understand it in the context of specific foods and specific fatty acid compositions.

"We need to find ways to reduce fat consumption but I would argue the problem is we don't eat fat, we just eat fatty food," Running concluded.

"CR9 could satisfy demand for this essential oil," said Simon. "It is grown in a similar way to large-scale commercial mint."

Simon said the group's latest research in formulation and processing method focuses on incorporating insect repellents into safe, effective and long-lasting repellents as an alternative to 10% DEET. The research and development of using catnip as an insect repellent was conducted as part of a grant from the Global Health Foundation together with a number of partners together with the dermal center at Rutgers University.