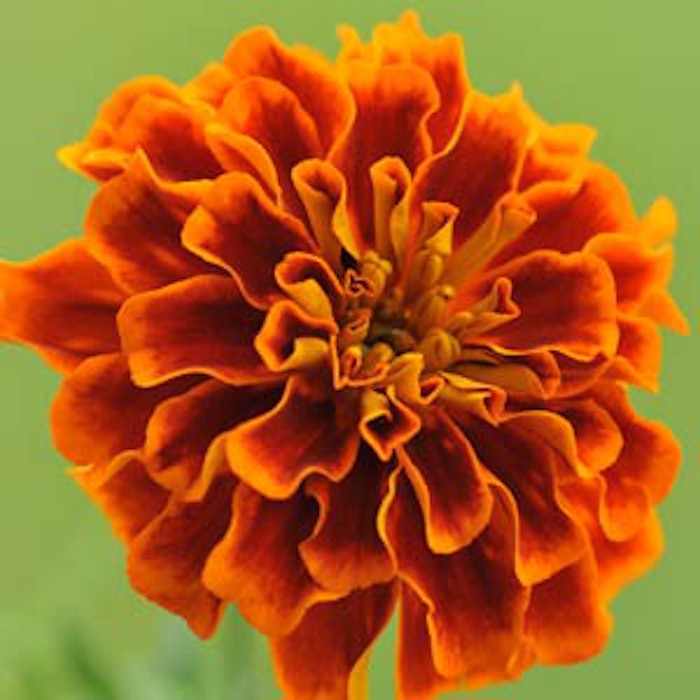 A survey of the literature reveals that tagetes oil (Tagetes minuta L.) has been reviewed a number of times before (Lawrence, 1992, 1996, 2000, 2006 and 2009). However, over the last 15 years a number of studies were missed. These are included in this current review.

Prakasa Rao et al. (2000) examined the effect of fertilization on the growth and oil yield of T. minuta grown as a main and ratoon crop (second harvest). They found that the application of 100 kg N./ha increased the oil yield from 7.0–9.8 kg/ha to 21.3–21.8 kg/ha. In addition, the authors examined the main constituent content of T. minuta harvested at various growth stages. The result of this study can be seen in T-1.

The major constituents of an oil of T. minuta that was produced commercially in Madagascar were determined by Juliani et al. (2004) to be as follows:

El-Deeb et al. (2004) reported the results of their analysis of a hydrodistilled oil produced from full flowering T. minuta grown in the southern region of Saudi Arabia. As most of the constituents listed by the authors were incorrectly identified, no data will be included in this review.

Chamorro et al. (2008) examined the content of the main oil constituents of 19 different collections of T. minuta growing in its natural habitat throughout Chaco Province (Argentina). They found the level of each constituent of the flower oil ranged as follows:

The effect of row spacing and nitrogen fertilization on T. minuta grown in Lucknow (Uttar Pradesh, India) was studied by Singh et al. (2008). They found that a 30cm row spacing and addition of 150 kg N/ha produced the highest oil yield. The main components of this oil, which was produced in 71 kg/ha were:

A commercial oil of T. minuta that was purchased in S. Africa was analyzed by Oyedemi et al. (2008) using GC/MS only. The constituents characterized in this oil were:

The authors also misidentified a further 15 so-called constituents. The African Journal of Biotechnology needs to pay a lot more attention to the quality of their so-called peer-reviewed journal.

An oil of T. minuta that was produced from plants growing in Argentina was screened for its mosquito repellent activity by Gillis et al. (2008). The main components of this oil were characterized as:

As can be seen there was an error in this report as the constituents characterized totaled 117.8%; however, it is included for the completeness of this review.

Tagetes minuta plants collected at their full flowering stage from the Dehradun region of Uttarakhand (India) by Kumar et al. (2009). Analysis of this oil by GC/MS and GC-FID revealed that the following constituents were characterized:

Analysis of a commercial sample of T. minuta using GC-Olfactometry methodology, such as Aroma Extract Dilution Analysis (AEDA) and Vocabulary-Intensity-Duration of Elementary Odors by Sniffing (VIDEO-Sniff), was the subject of study by Breme et al. (2009). The AEDA GC-O method is a dilution to threshold GC measurement best used with a minimum of eight judges. In contrast the VIDEO-Sniff GC-O method, which was developed by the French National Agronomy Research Institute (INRA) combines detection frequency and time intensity, which includes a developed vocabulary that is used to differentiate odors into olfactory groupings. The important odorant compounds identified in T. minuta oil by AEDA in order of importance were as follows:

In contrast, the potent odorants in T. minuta oil as determined by VIDEO-Sniff GC-Omethodology were in order of intensity as follows:

Ramaroson-Raonizafinimanana et al. (2009) collected 18 T. minuta plants with flower colors ranging from sulphur-yellow to orange-purple from the highlands and eastern parts of Madagascar. Oils were produced by steam distillation from the various collections in 0.10–0.17% yield. A summary of the results of the analyses of the oils produced from various flower-colored T. minuta can be seen in T-2. The analyses, which were performed using GC-FID and GC/MS, revealed that there was not a direct relationship between the oil composition and flower color. Also, the compositions of the oils produced from the different flower types varied widely. Finally, the oil compositions were mostly dissimilar to those normally encountered from T. minuta. The authors believed that their results indicated the existence of chemotypes hither too not encountered before.

Ghiasvand et al. (2011) collected T. minuta plants in full flower after which they were dried and ground and 0.5g was placed in a 40mL vial containing 500mL of double distilled water. The vial was initially shaken vigorously and then was placed in an ultrasonicator and incubated at 70°C for 15 min to allow full equilibration of the volatiles. Headspace volatiles were isolated from this aqueous mixture using a PDMS SPME fibre placed into the vial for 40 minutes. Analysis of the volatiles isolated from the fibre was performed by GC/MS only. The constituents characterized in the headspace were compared with an oil produced from the same batch of plants by hydrodistillation. The results of this comparative study are presented in T-4.

†not a T. minuta oil constituent

An oil of T. minuta was produced by hydrodistillation from plants grown in Khoramabad (Iran) from seeds collected from Namibia where the plant grows wild. Analysis of the oil by Meshkatalsadat et al. (2010) using GC-FID and GC/MS revealed that it possessed the following composition:

The fresh aerial plants were divided up into flowers, leaves, stems as well as the whole plant. These were separately chopped and placed in vials from which their headspace volatiles were determined by GC-FID and GC/MS, and compared with the composition of an oil produced by 3hr hydrodistillation (see T-5).

Saharkhiz et al. (2012) performed pot experiments on the foliar application of diammonium phosphate (DAP) on T. minuta. Oils produced from the various levels of DAP application were analyzed by GC-FID and GC/MS and found to contain similar constituents as shown as follows:

The authors concluded that a 7.2% DAP foliar spray enhanced the biosynthesis of essential oil in the aerial parts, although not significantly.

The effect of transplanting date on the production of T. minuta oil and its major constituents was studied by Kumar et al. (2012).

The oils produced by 4hr hydrodistillation from plants in full flower that were transplanted between April 12 to June 25 in Palampur (Uttarakhand, India) were analyzed by GC-FID and GC/MS. The results of which can be seen in T-6.

Tagetes minuta plants were collected from different locations in Chaco Province (Argentina) at different times of the year. Oils produced from vegetative plants with flowers and flowers with seeds were examined by Chamorro et al. (2012). The major constituents characterized in these oils can be seen in T-7.

Garcia et al. (2012) determined that a 20% solution of tagetes oil had great potential as an environmentally accaricide against four tick species in Brazil. The oil used in this study contained the following major constituents:

Tagetes minuta plants grown in an experimental garden in lsfahan (Iran) by Shirazi et al. (2014) that were harvested in full flower, were subjected to hydrodistillation for 3 hr. Analysis of the oil using GC/MS only resulted in the characterization of the following constituents:

Effect of transplanting date on the major constituents of the leaf, stem and flower oils