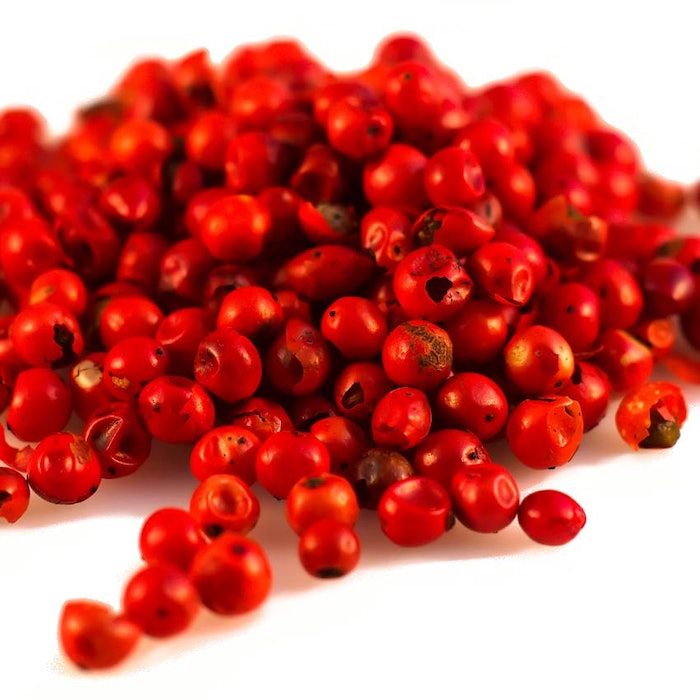 Almeida Barbosa et al. (2007) collected leaves and fruit of S. terebinthifolius from wild plants found in Visçosa (Minas Gerais, Brazil). The authors separated the aerial parts into stems with leaves and no flowers, stems with leaves and flowers, unripe fruit and ripe fruit. Each separated sample was subjected to hydrodistillation for 3hr. The resultant oils were analyzed using GC/MS only. The analytical results were compared with the analysis of a commercial supercritical fluid extract of pink pepper of French origin. A comparison of the results of this study are presented in T-1.

Fresh leaves of S. terebinthifolius were collected in Zimbabwe by Gundidza et al. (2009). An oil that was produced in 0.65% yield from the fresh leaves was subjected to analysis by GC/MS only. The constituents characterized in this leaf oil were:

a incorrectly identified as β-myrcene

b incorrectly identified as sabinene

Atti dos Santos et al. (2009) examined the supercritical fluid CO2 extraction of the volatiles of S. terebibthifolius leaves grown is southern Brazil. They found that the conditions that produced the highest yield (0.56%) of volatiles were 40°C, at 120 bar with a CO2 flow of 2.0mL/min. The components characterized in this volatile concentrate were:

However, it should be pointed out that the authors only characterized 66.7% of the volatile concentrate.

Hydrodistillation of this same batch of dried leaves of S. terebinthifolius was examined by the same authors for 6hr on an hour by hour basis. They found that the highest yield (1.10%) of oil was experienced at after 4hr distillation. The constituents chara cterized in this oil were as follows:

Mara Roveda et al. (2010) analyzed a lab distilled oil produced from the ripe fruit of S. terebinthifolius of Brazilian origin using GC/MS only. As many of the constituents were not correctly identified no data will be presented.

Fonseca do Nascimento et al. (2012) collected both ripe and unripe fruit of S. terebinthifolius from a forest area near Recife (Pernambaco, Brazil). The fresh fruit were divided into unripe (green) and ripe (pink-red) and separately subjected to hydrodistillation for 2hr with yields of 1.8% and 2.8%, respectively. Each oil was analyzed using GC/MS only the results of which can be seen in T-2.

Comparative percentage composition of the leaf and fruit oils of Schinus terebinthifolius.