Endpoint. Seeing Past the Amber Glass 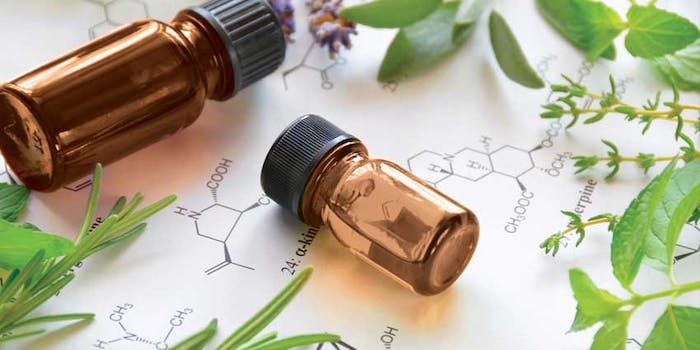 What do you think the consumer envisions in a product touted as natural? That using it will make them healthier, wholesome and bring them closer to nature? Or that nature’s extracts hold secrets to longevity and enlightenment?

These marketing messages are lovely reflections. But flavor and fragrance chemists see through the amber glass bottles to the fundamental issues with naturals—stability during processing and identity validation, for example. Here, we review some recent advances in these areas.

Spray-drying All Dried Up?

Last month, we learned [1] researchers have identified the flavor components lost from commercial tomatoes due to genetic improvements for fruit ripeness duration and crop yield. In related work [2], researchers from Australia’s University of New South Wales and Commonwealth Scientific and Industrial Research Organization compared the impact of processing techniques on the compounds in tomato flavors.

The nonvolatile, volatile and odor compounds retained in fresh tomato flavors were compared for those produced by heat pump dehumidifying, and fresh- and freeze-drying. In the case of volatiles, commercial spray-drying also was compared for potential thermal-induced changes.

Interestingly, no differences were observed in the nonvolatile components. And the volatile and sensory profiles of heat pump-dried tomato flavor were comparable to freeze-dried tomato flavor; both reportedly retained a good, fresh aroma. However, the loss of (E)-2-hexenal, 1-penten-3-one and 1-hexanol, which contribute to the fresh green aroma, was detected in spray-dried tomato; along with the addition of the heat-induced compounds dimethyl sulfide, furfural and pyrrole derivatives.

Spray-drying is a preferred method to treat thermally sensitive materials. However, if findings such as these are consistently corroborated, and the pursuit of better-tasting tomato flavor continues, it could be only a matter of time before a new approach is ripe and spray-drying becomes all dried up.

Stability and Frugality in F&F

Flavor stability also was the subject of work published in the Journal of Inclusion Phenomena and Macrocyclic Chemistry [3]. Here, researchers complexed flavors with various cyclodextrins to test their ability to encapsulate and protect flavors from thermal and storage degradation.

Three natural cyclodextrins and/or their mixture with linear dextrins—i.e., a conversion mixture, the intermediate product of cyclodextrin manufacturing—were tested with two model flavors, thymol and vanillin; and two essential oils, thyme oil and oregano. Both oils contained thymol as a main component.

In relation, improvements in the fragrance and olfactory properties of low value citronella (Cymbopogon winterianus) essential oil recently were achieved [4] by enriching it primarily with cis-rose oxide. According to the authors, this improved not only its commercial value, but also its utility and use. It also resulted in oil having a higher percentage of rose oxide than any known essential oils; the researchers note the transformed oil exhibited a peroxide value of 2.4, consistent with AOCS regulations.

Logic dictates that greater demand on finite natural resources puts product developers between an all-natural rock and a hard-to-please, synthetic place. It’s no one why innovation is moving toward leveraging what’s available and giving it a boost for what’s not.

Recent research from Northeast Forestry University in China [5] describes a microwave pretreatment method that inactivates endogenous enzymes and preserves the pectin, naringin and limonin contents in pomelo flavedo. This extended its storage time and improved the extraction of pomelo essential oil.

Microwave pretreatment performed better than hydrodistillation in terms of extraction efficiency, 1.88 ± 0.06% in 24 min versus 1.91 ± 0.08% in 240 min; and oxygenation fraction, 48.59 ± 1.32% versus 29.63 ± 1.02%. It also consumed less energy and produced less CO2. Furthermore, pretreated samples retained higher amounts of pectin, naringin and limonin than untreated samples.

Microwave-assisted simultaneous distillation and extraction (MA-SDE) is not new. It’s been around for years; for example, to derive vegetable extracts [6], Taxus chinensis var. mairei [7] extracts and even as a green process to extract herbicides from soil [8], to name but a few. More recently, however, the focus of MA extraction seems to have focused on natural actives such as polysaccharides from Moringa oleifera [9], or phytic acid and pyrophosphate in walnuts [10].

With speed on its side, MA-SDE appears to be a promising technique, with room to delve into new possibilities and grow alongside the burgeoning naturals market.

Since natural extracts are rare and precious, they are also a natural target for adulteration. For this reason, recent work from France investigated the use of nontargeted ultra-high performance liquid chromatography/time-of-flight mass spectrometry (UHPLC-ToFMS) metabolomics to detect possible tampering.

Focusing on Viola odorata L. (English violet), the researchers found significant differences in the metabolic fingerprints of the violet leaf absolutes based on geographical location and/or adulteration. Markers of geographical origin were also detected through their molecular weight/most probable molecular formula and retention time, while adulterations were statistically validated [11].

The authors concluded this approach accelerated both identifying the origin of raw materials, and searching for potential adulterations. And considering today’s pace of product development and speed to market, it could be the fast past to success.

Finally, winning the race is all for naught if the consumer isn’t buying at the same breathless pace. But natural product manufacturers know the scales are tilted their favor; in fact, a recent study [12] shows that products labeled as natural are viewed with a “halo.”