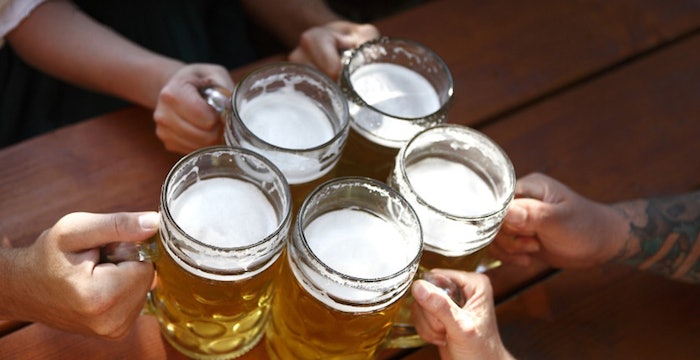 Oktoberfest is in full swing, and new research has revealed that European consumers are opting for low or no alcohol beer, saying it tastes just as good as "regular" beer.

Across Europe, 33% of Spanish, 23% of German, 11% of UK and 9% of French consumers drink non-alcoholic beer, according to Mintel research.

Another noteworthy finding is that the stigma of drinking non-alcoholic beer is beginning to disappear due to a focus on health and wellness, Mintel found.

“As health and wellness trends influence alcohol consumption more and more, consumers are being drawn towards moderate beer options and the stigma of drinking low or no alcohol beer is being challenged," said Forsyth.

According to Mintel research, only one in 10 (9%) German consumers say they would be embarrassed to be seen drinking low or no alcohol beer, followed by 14% of consumers in France. In the UK, responsible drinking is high on the agenda for half (51%) of millennials who say they are careful not to exceed the recommended weekly units of alcohol when drinking beer.

More than half of German consumers (56%) say they would trust their favorite brand to produce a good tasting low or no alcohol version, with half of consumers in Spain (50%) agreeing with this statement. However, low-alcohol beer innovation remains very limited, despite plenty of activity in Europe, Asia Pacific and the Middle East and Africa, according to Mintel. Only 6% of beers launched in France in 2016 were low or no alcohol, compared to a global average of 8%.

Studies have found that China is the most prolific global innovator of low or no alcohol beer product launches, according to Mintel Global New Products Database (GNPD). Over one in four (29%) beers launched in China in 2016 contained low or no alcohol, compared with around one in 10 beers launched in Spain (12%), Germany (11%), Poland (9%) and the UK (7%). "While China leads in low and no alcohol beer innovation, Mintel research indicates that Chinese consumers, in general, prefer less strong beer in terms of ABV, compared to the global market," said Forsyth.

“There is a strong case for further non-alcoholic beer growth potential in the Middle Eastern and Asian markets, especially those with a big Muslim population, such as Indonesia," Forsyth concluded.