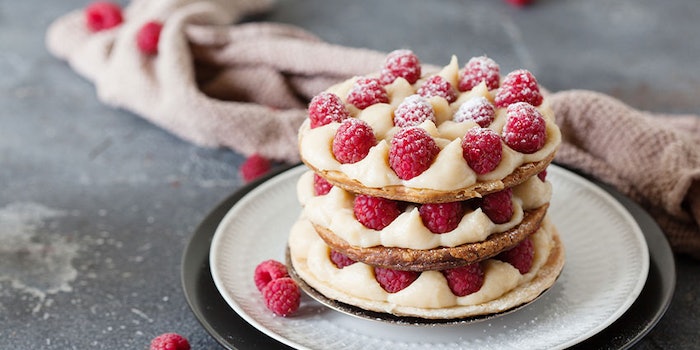 The character of raspberry ketone is fruity, with an obvious raspberry note. It blends harmoniously with vanillin and maltol and all the many members of their odor families.

4-(P-Hydroxyphenyl)-2-butanone must be a serious contender for the prize for the flavor chemical with the longest list of goofy names—raspberry ketone, frambinone, oxyphenylon, Compound Number One, rastone, rasketone and oxanone immediately spring to mind. Raspberry ketone (FEMA# 2588, CAS# 5471-51-2) is far and away the term that is most commonly used.

Unlike many chemicals that were in common use at the start of my career, raspberry ketone has not only continued in widespread use, but has also gone from strength to strength. At first sight, it is hard to see why that should be the case. It was discovered as a “silver bullet” for raspberry flavors, and that continues to be the profile where it is used at the highest level. The reason for its popularity may lie in the fact that it forms especially harmonious odor and taste mixtures with vanilla, candy and balsamic notes. This opens up a far wider range of options than just the obvious members of the raspberry family.

The character of raspberry ketone is fruity, with an obvious raspberry note. It blends harmoniously with vanillin and maltol and all the many members of their odor families. At higher levels, it has a strong affinity for zingerone. Small additions of zingerone enhance the raspberry note, add a subtle balsamic character and deliver a much more natural effect. The ideal ratio of the two chemicals is between eight and 10 to one.