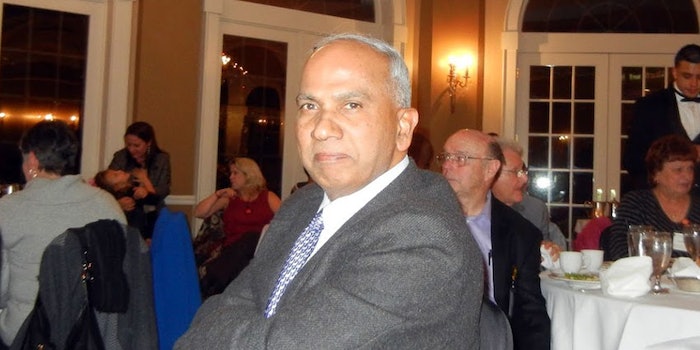 The Society of Cosmetic Chemists’ (SCC) Midwest Chapter announced it has posthumously awarded the Stanley Allured Lifetime Service Award to Chimpiramma (Chim) Potini. His family will receive the honor on his behalf during a virtual meeting, to be held on Nov. 10, 2020.

Potini was born in rural India, into a farming family in a town called Karamchedu, where he excelled in schoolwork while also helping to work in the fields. He was routinely at the top of his classes in India, which enabled his immigration to the United States in the 1970s.

Once Potini came to the United States, he worked on advanced degrees in chemistry at New Mexico State University and Texas A&M University-Commerce. His first job was at Clintwood Chemical Co. of Chicago in the 1980s. He always remembered those times fondly and the strong friendships he made.

From there, Potini served as a formulation chemist for companies such as Colgate-Palmolive Co. and Bausch & Lomb, Inc., helping to formulate consumer products. He was married in 1983 to Sheila and they had two children, Vishnu and Yogitha, both of whom are physicians today. He eventually settled his family in central Illinois and started his own manufacturing company, HNC Products Inc.

While formulating various anti-aging and other skin care products, he grew his company into a successful contract manufacturer for several national brands. He also developed his own line, Hale Cosmeceuticals, which has found success in the B2B community with estheticians and spas. Despite the challenges facing all small businesses, he succeeded largely due to his work ethic and devotion to his craft.

Chim Potini passed away on April 14, 2019, at the age of 67 and is survived by his wife and children as well as three grandchildren, Aanya, Naina and Meera.

The Stanley Allured Lifetime Service Award was founded by the Midwest SCC (MWSCC) in 2010 to recognize a member for a lifetime of distinguished contribu­tions, achievements and service to the chapter. It was named for Allured Business Media founder Stanley Allured, whose family purchased The American Perfumer and Aromatics publication in 1960, which eventually evolved to become Perfumer & Flavorist and Cosmetics & Toiletries. Allured was an avid supporter and active participant in the SCC at both regional and national levels.