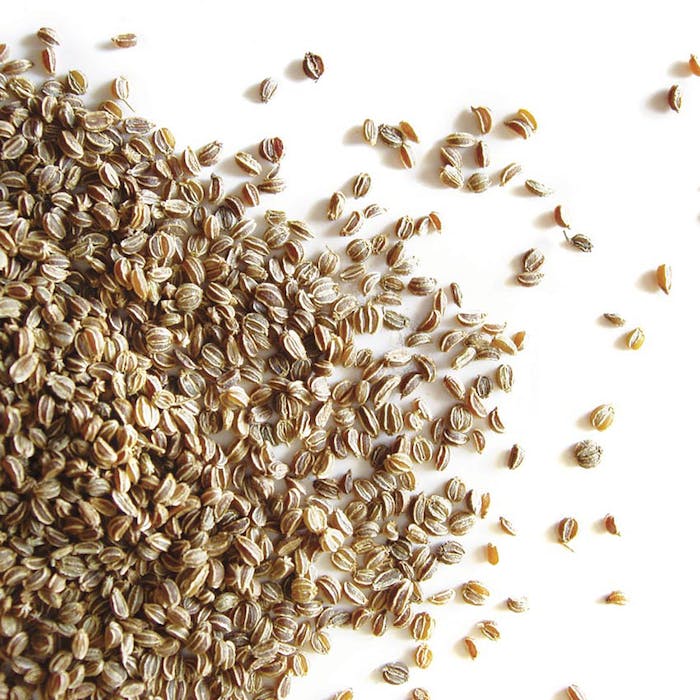 Celery is an annual or biennial member of the Apiaceae (Umbelliferae) family. Although there are two well-known varieties of Apium graveolens L., celery seed oil is obtained by steam distillation of A. graveolens var. dulce (Mill.) Pers. The other variety, A. graveolens var. rapaceum (Mill.) Gaudich, possesses dark green leaves and is grown for its root tubers (celeriac).

Two less recognized celery varieties are A. graveolens var. filicium Crovetto which is cultivated in Egypt, as is A. graveolens var. secalinum Alef. (also known as Chinese celery). Celery (A. graveolens var. dulce) is an erect, herbaceous plant that grows to a height of 60–90 cm. It has a succulent, shallow tap root with numerous small feeder roots. The stem is branched, somewhat succulent, fistular (hollow), angular and ridged from which deeply divided pinnate leaves that are coarsely toothed at their apex arise. Each plant produces numerous small, tightly-spaced, white five petal flowers aggregated in umbellets and umbels. It is estimated that there are typically 300 umbells and 10–14 umbellates per plant. The aggregated floral system attracts insects for natural cross- and self-pollination even within flowers on the same plant (Jamwal and Kaul, 1996).

The fact that A. graveolens var. dulce can be both cross- and self-pollinated suggests that it can be readily grown in various environments. Once pollinated the small two-seeded ellipsoid-shaped schizocarp (split fruit) are formed. It is estimated (Choudhary et al. 1993) that the seed yield per umbell is 5–7.5 and 1,654 seeds weigh 1 kg. As with all Apiaceae fruit, the essential oil is found in the internal schizogenous cavities (cells separated from each other) in the oil ducts found longitudinally along the seed. Because celery has a complex floral biology, selective hybridization is extremely difficult, as a result new cultivars have been developed by mass selection and random hybridization (Choudhary and Kaul 1992).

A study on 11 selected genotypes by Choudhary and Kaul determined that the environmental (extrinsic) conditions were the most influenced factors rather than the intrinsic conditions for the inheritability of plant height and seed formation. Consequently, the grower has to select a cultivar based on its seed yield in his local environment.

Celery, which is a long duration crop taking 190–210 days to mature, is grown for seed and seed oil production in northern and eastern Europe, China, India, several African countries and the USA (Krishnamurthy 2008). In India (the main seed oil producing country) the main cultivation regions are in the districts of Amritsar, Ferozepur and Jalandhar (Punjab), Ladwa (Haryana) and Saharanpur (Uttar Pradesh). Smaller scale production can also be found in Jagadhari (U.P.), Karnal (Haryana) and Kirama, Ludhiana and Shami (Punjab) (Malhotra, 2012). The annual production of celery seed in India in 2008 was ca. 40,000 metric tons of which 70–75% is exported mainly to the USA (Sowbhagya et al. 2010).

Although celery is an important cash crop in NW India, when grown in the Bangalore region of Karnataka (Southern India), it behaves as an annual during first season (Sudheendram et al. 1993). The authors determined the maximum seed yield of 1540 kg/ha. could be attained when the seeds are sown on June 1st. In the Punjab region, the average seed yield is 1,000–1500 kg/ha., however, with good farming practices, a selected cultivar yields of 1,600 kg/ha. or greater can be achieved. Bhagat et al. (1980) reported that the highest oil yield of celery seed could be found in seed harvested 185–198 days after sowing.

The steam distillation of celery seed is very time consuming. The amount of time is dependent on the charge size, whether the seed is whole or flaked (comminuted), the dryness of the seed and the pressure and wetness of the steam (Verghese, 1990).

According to Malhotra (2012) it takes 10–12 hours to steam distil one batch (amount not given). The average oil yield of celery seed is 2.0–2.5%, which equates to a field (plantation) oil yield of 20–30 kg/ha. (Facooqui and Sreerama, 2001). Sowbhagya et al. (2007) examined the effect of grinding either in combination with cooling or not. They found that through the use of a mini plate mill, the seeds were flaked whereas the seed was powdered using a hammer mill. On distillation, flaking the seed resulted an oil yield of 1.76% compared to yield of 1.42% if the seed was powdered. Also the authors found that the water soluble portion of the oil containing the phthalides could be recovered using hexane extraction of the condensate from steam distillation. Previously, celery seed oil has been the subject of review (Lawrence, 1980, 1989, 1985, 1989, 1990, 1995, 1998 and 2005).

Celery seed oil was found by Lawrence (1970) to contain the following major constituents:

Moyler (1989) reported that the yield of oil produced by steam distillation and an extract of celery seed produced by subcritical CO2 extraction was 2.5–3.0% and 3.0%, respectively. He noted that under the subcritical conditions lipids with molecular weights of 400 or less are solubilized in the extract. Furthermore, Moyler noted that the oil contained limonene (74%), 5-pentyl-1,3-cyclohexadiene, pentylbenzene, β-selinene, valerophenone, 3-butylphthalide (3%) and sedanoic anhydride (2.3%). In contrast, he reported the CO2 extract contained 60% lipids and 40% oil, which in turn contained limonene (8%), 3-butyl phthalide (10%) and sedanoic anhydride (14%).

Celery seed harvested from the Saharanpur area of Uttar Pradesh was subjected to hydrodistillation by Chowdhury and Kapoor (2000) to produce an oil in 2.2% yield. Analysis of the oil using GC/MS only revealed it possessed the following composition:

A number of other compounds, which were listed as constituents, are not included because they were incorrectly identified.

Celery seed, which was obtained from two cultivation areas of Punjab and one in Kanpur (Uttar Pradesh, India), were separately subjected to hydrodistillation by Philippe et al. (2002). Analysis of the oils was performed using GC/MS only. The results of this study in which kessaue was found as a minor constituent of each oil can be seen in T-1. The oils from Kanpur and one of the regions of Punjab were similar, which is why they were combined.

Wei and Shibamoto (2007) screened a number of commercially available oils for their antioxidant activity, among which was a sample of celery seed oil. The only components of the oil the authors characterized were limonene (74.6%) and β-selinene (16.0%). The authors found both limonene and celery seed oil possessed inhibitory activity toward malonaldehyde formation from squalene or UV–irradiation.

Kurobayashi et al. (2008) examined the enhancement of celery on the flavor of chicken broth. They found the key aroma constituents of celery seed oil were 3-butylphthalide, sedanolide and sedanenolide.

Sowbhagya et al. (2010) examined the effect of spraying four different enzymes (cellulose, protease, pectinase or viscozyme) onto celery seeds, mixed and incubated at 45° C for 30–120 min. (Viscozyme is a commercial mixture of a pectinase and a fungal glucanase). After drying the seed it was powdered to pass through a BSS mesh size 20 sieve and subjected to steam distillation. The authors found the use of the enzymes increased the oil yield from 1.8% to 2.2–2.3% depending upon the enzyme. Analysis of the oils using cellulose, viscozyme or no treatment on the seed by GC-FID and GC/MS revealed there were some quantitative differences in the oil compositions as shown in T-2.

Khalid and Hussein (2012) analyzed a number of oils produced by hydrodistillation from celery seed grown in Egypt using different fertilization regimens. The oils were analyzed using GC/MS only. A summary of the results of this study are shown in T-3.

Unfortunately, the authors did not present any quantitative information. GC/MS analysis of the solvent extract of the fresh celery plants resulted in the characterization of 3-methyl-4-ethylhexane, α- and β-pinene, myrcene, limonene, an isomer of β-ocimene, g-terpinene, terpinolene, pentylcyclohexadiene, butyl phthalide and linoleic acid.

Wassenhove et al. (1990) examined the volatile compositions in oils produced by the Likens–Nickelson simultaneous distillation and extraction process of four cultivars (‘Blancato’, ‘Avon Pearl’, Golden Sparten’ and ‘Lorat’) of blanching celery and five cultivars (‘Monarch’, ‘Tropa’, ‘Cobra’, ‘Correcta’ and ‘Snehvide’) of celeriac. The oils were analyzed using GC-FID and GC/MS and the results of this study are shown in T-4.

D’Antuono et al. (2002) collected the celery trimming waste materials from the ‘Darklet’ celery cultivar produced from plants grown with different nitrogen levels and subjected them to hydrodistillation. The results of the analyses of the oils by GC/MS only can be seen in T-5.

Oils produced from celery leaves (fresh and dried), which were obtained from stalk celery grown in Estonia, were the subject of analysis by Orav et al. (2003). The components characterized in the fresh leaf oil (0.37% yield) and dried leaf oil in 3.8% yield can be seen in T-6.

Sipailiene et al. (2005) examined the volatiles found in the various processes used to make a range of supercritical fluid CO2 extracts of the comminuted dried leaves and roots of a celery cultivar grown in Lithuania. The authors used GC-FID and GC/MS as their method of analysis. The authors found that the extract yields varied from 0.52–1.59% (roots) and 0.56–1.26% (leaves). The compositions of the volatiles found in the root and leaf extracts can be seen in T-7.

The authors inferred that although the use of supercritical fluid CO2 as a solvent to extract celery roots and leaves, the low yield of volatiles makes the process uneconomical.

A leaf oil of A. graveolens of Nigerian origin was reported by Ehiabhi et al. (2006) to contain the following constituents:

Trace amounts (<0.1%) of α-pinene, camphene, α-copaene, zingiberene and (E)-phytol were also found in the oil.

Sellami et al. (2012) used GC-FID and GC/MS to examine the composition of oils produced by hydrodistillation from leaves, stalks and roots of A. graveolens var. dulce grown in the region of Soliman (N.E. Tunisia). The compositions of the various oils are presented in T-8.

Saleh et al. (1998) analyzed an oil produced by hydrodistillation of the whole plant of A. graveolens var. filicinum that was grown in Giza, Egypt using column chromatography, GC-FID, GC/MS and low pressure liquid chromatography. The oil, produced in 2.3% yield, was found to contain the following constituents:

Finally, it is interesting to note how Ogura and Watanabe (2011a) synthesized the four stereoisomers of sedanolide and determined the odor-threshold of (3S,3aR)-sedanolide was 1.3x10-2 ppm. It was found to possess a natural celery leaf, herbal odor with a strong bitterness. Ogura and Watanabe (2011b) also synthesized two stereoisomers of sedanenolide (also called senkyunolide) and two stereoisomers of butyl phthalide. They determined the (S)-(-) isomers of sedanenolide and butyl phthalide were 0.14 ppm and 0.07 ppm, respectively. Both isomers were found to possess a celery stem and a fresh celery leaf-like odor.