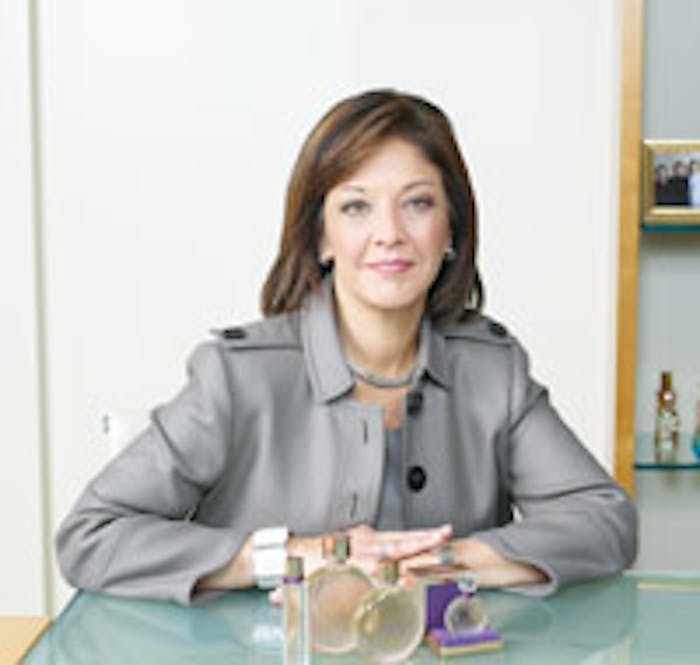 Karyn Khoury will speak as part of a panel at the World Perfumery Congress in Cannes, France, June 1–4, 2010. Read Khoury’s take on fragrance launches in the wake of the economic crisis in the January 2010 issue of P&F magazine.

Advertise in the official post-WPC proceedings.

“We need to realistically assess where we’ve been, what the consumer is telling us and how we can reinvent ourselves,” says Karyn Khoury, senior vice president at Estée Lauder. The recent economic crisis, declining fragrance usage by consumers and a pullback in overall fragrance launches in 2009 provide a context for industry reinvention, she says. “I believe that fragrance plays an important role in consumers’ lives. If you look at fragrance in total—the way in which scents add color and meaning and reinforce emotion in many different product categories and forms other than traditional liquids—scent hasn’t left the consumer behavior, it’s just morphed. We need to understand the new form it’s taken and reconnect with it.”

In this way, Khoury hopes the industry realizes “it can no longer be business as usual.” The fragrance industry has always been founded on creativity, she says, both in formulation and marketing; a return to those roots is necessary for success. “The state of the market has shown the industry that looking for the safer way isn’t working,” says Khoury. “We need to go back to instinct, creativity and quality—the attributes upon which this industry was founded—this time tempered with the consumer understanding, but not led only by consumer testing.”

Looking ahead, Khoury says, “My hope and my sense is the conversation will be different [by June 2010] in that we will have taken some of the initial steps … in finding new ways to reach out to the consumer. Hopefully you’ll start to see some of that in in-store experiences and possibly in the introductions that come out between now and then. I think you’ll see the beginnings of this approach, but it will very much be in an evolutionary state. This isn’t a quick fix situation. It took us many years to get to the situation we’re in. It’s not going to be a matter of months before we fix it. I think the encouraging and positive thing is that there is a universal recognition that we must fix it; the survival of our industry depends on that.”

One of the biggest opportunities for success, says Khoury, lies in consumer enthusiasm for online communication and a parallel desire to understand and connect with products on a deeper level. This presents an obvious sensory challenge to the fragrance industry. “Fragrance has always had a bit more of a challenge [online] because you can’t smell it,” she says. “You can see color, you can see treatment results. We’ve got to find a way to increase the connective power of the internet in communicating the experience of a [fragrance] brand.” Many in the industry refer to the site for Lola as good first step. It reveals the fragrance to the consumer through a number of different approaches including games, downloads and, yes, bios of the perfumers behind the scent. “We have to find a way to make the experience so emotionally compelling, that even though [the consumer] can’t smell the fragrance, they are drawn to then go and experience the brand.” This, she says, goes back to the concept of storytelling: “Giving consumers the true story of where fragrances come from, the materials and true craftsmanship of perfumery, the art.”