Celebrating and Defending Naturals in Perfumery 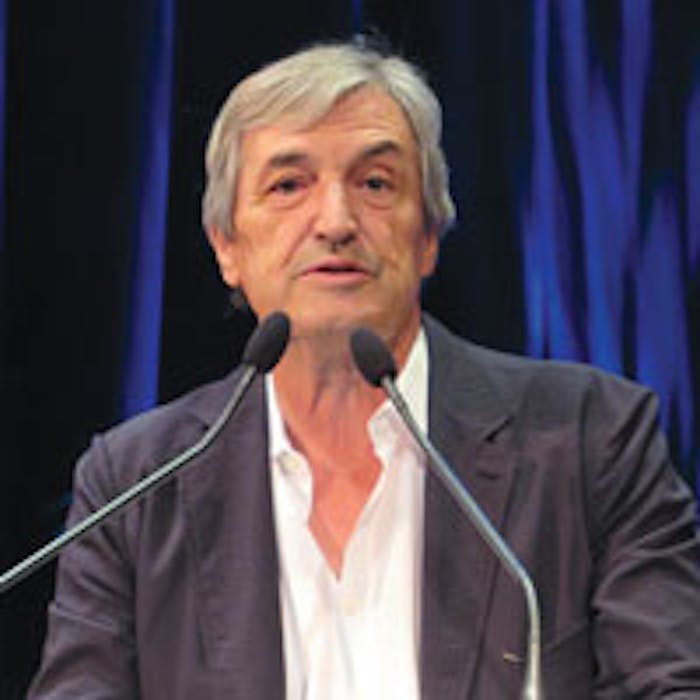 The future of perfumery requires both naturals and synthetic chemicals, noted Jean-Claude Ellena, the director of perfumery for Hermès, during a presentation at the European Federation of Essential Oils' annual general meeting in June in Grasse, France.

The future of perfumery requires both naturals and synthetic chemicals, noted Jean-Claude Ellena, the director of perfumery for Hermès, during a presentation at the European Federation of Essential Oils’ annual general meeting in June in Grasse, France.

Ellena, who began his career with essential oil house Antoine Chiris at age 16, is the nose behind such Hermès fragrances as Jour d’Hermès Gardénia and Absolu, Rose Ikebana, Terre d’Hermès, Kelly Calèche, Un Jardin sur le Nil, Voyage d’Hermès, Voyage d’Hermes and L’Ambre des Merveilles among many others. Noting that natural products are a “chapter” with a strong story, the perfumer explained that Hermès takes a perfumery, rather than a marketing, approach to fragrance, embracing ingredients and highlighting them in marketing.

The Hermès fragrance legacy extends back to 1951, Ellena said, adding that all of the brand’s scents remain available to this day, ensuring that consumers can always access their olfactory memories. As for the future, he said, naturals will play a key role.

The quality of ingredients is, of course, paramount to the quality of the finished fragrance, Ellena explained. Yet, assessment of that quality requires deep knowledge. The perfumer noted that, in his view, the future of naturals do not lie in florals, nor in faddish ingredients.

Ellena listed a number of ingredients he finds interesting, including bourgeons de cassis, magnolia, osmanthus, bigarade (without color and bergaptene), shiso, sesame and Sichuan pepper. What unites these materials, which are all commercially available, is a strong identity and good cost/effect ratio. For more unique effects, Ellena embraces customized natural ingredients, including unique preparations of lavender, jasmine and vetiver.

In all, Ellena said he uses a palette of just 120 ingredients for his creations. And each formula typically comprises no more than 20 to 30 products. This, in Ellena’s view, is not a limitation to creativity. In order to add a product to his palette, he said, an ingredient must provide a uniqueness and strong impact.

He closed by stressing that there is no cause and effect relationship between the quantity of naturals within a fragrance and its quality. Rather, as with a chef, the quality of ingredients and the skill of the perfumer are paramount.

Ellena noted that he does not view the present regulatory environment, such as the fragrance allergen issues in the European Union, as a hindrance to creative perfumery. However, he said, these emerging restrictions do pose difficulties for older formulas.

However, there are very real perils facing the industry. During another EFEO presentation, Eric Chaisse of CRIEPPAM (Le Centre Régional Interprofessionnel d’Expérimentation en Plantes à Parfum Aromatiques et Médicinales) provided an update on the fight against lavender disease. Currently, he said, about 1,000 tons of lavandin (16,000 ha) and 35–55 tons of lavender (500 ha) are produced in the region.

Today, CRIEPPAM is focused on so-called “yellow decline,” a disease that dries out plant stems (which turn yellow). The disease, present throughout Europe, is attributed to the presence of stolbur phytoplasma and impacts lavender, Lavandin abrialis, clary sage and other important plants (lavandin ‘Grosso’ is comparably much less vulnerable).

Yellow decline is spread via propagation and Hyalesthes obsoletus insects, Chaisse explained. The insect nuisance is difficult to mitigate due to the presence of bees, which could be harmed via the use of insecticides. Chaisse explained that young plantations are particularly vulnerable to these insects as 80% of them fly between the ground and a height of 20 cm. He added that the expansion of yellow decline is further exacerbated by climate change factors such as rising temperatures, erratic and intense rainfall, and intermittent droughts.

What is the industry to do? Chaisse noted a number of strategies to secure the future of threatened crops such as co-planting with taller crops for protection from insects, altering the color of lavender by spraying it with the mineral kaolinite, and selecting diseaseresistant varieties and strains (ex: Lavender ‘Diva’ and ‘Rapido’). Growers must also engage in “sanitary selection,” according to Chaisse, avoiding contaminated plant cuttings. Currently, he said, 60% of cuttings are done indoors. Furthermore, breeding in vitro from healthy plants can help avoid exposure to disease.

CRIEPPAM’s efforts have dovetailed with a range of stakeholders, including local beekeepers and the tourism industry. Contributors have assembled to supplement governmental funding at www.sauvegarde-lavandes-provence.org, a regional lavender endowment fund.

Chaisse noted that France is not alone in its yellow decline problem. Bulgaria is impacted to a limited degree, while Spain is threatened by climatic issues.

Bert Candaele of CRIEPPAM expanded on the improved harvesting techniques available for lavender and lavandin. These offer greater mechanization and benefit ingredient quality and the environment.

This is crucial as essential oils require a high level of energy to produce. According to Candaele’s figures, lavandin requires 1.5 kg of propane gas per batch, which represents 10–15% of the product’s value (processor and transport).

Improving energy usage requires the collection of productive material only, use of renewable energies and recycling, when possible. As most of lavender’s essential oil is located in the flower (versus just 3% in the stem, which accounts for about 50% of the total biomass), it makes sense to harvest only the oil-rich portion of the plants. Stems can be recycled as mulch for soil. In response, said Candaele, mechanization is being updated to allow harvesters to operate across multiple rows simultaneously. Emerging solutions include one machine to gather stems, while a rotating comb picks the flowers, as a second machine crushes the stems back into the ground.

The harvested flowers must then be distilled quickly to obtain the high quality sought after for luxury scents. To save energy at this stage, processers can heat water before feeding it into the boiler with a condensation heat exchanger. This reduces energy consumption by 12%, Candaele said. Condensing without external water and biomass boilers can further reduce energy usage. Meanwhile, “ecovaporators” can recycle water from the cooling process, further improving the sustainability footprint of lavender processing.