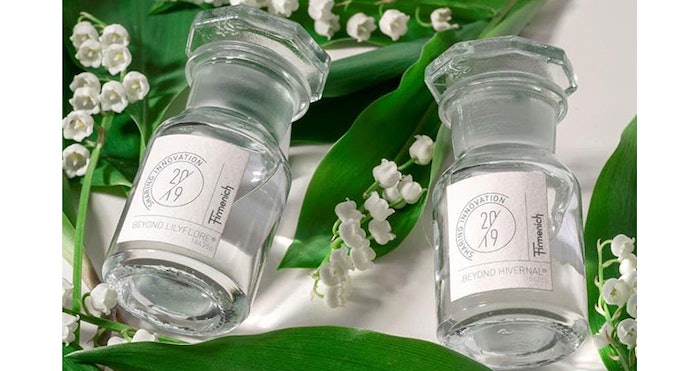 Firmenich offers two of its unique Beyond Muguet bases containing captive molecules. Beyond LILYFLORE® and Beyond HIVERNAL® NEO provide the building blocks for exploring new muguet fragrances… and beyond

Lily of the valley is a “mute” flower, meaning there is no natural extract. With the restriction of ingredients such as Lilial® and Lyral®, perfumers are still looking for the elusive lily of the valley, or muguet, fragrance ingredients. Firmenich opened access to two of its unique Beyond Muguet bases containing captive molecules to the whole industry through its annual Sharing Innovation program.

“Nobody has found the perfect replacement for Lilial® or Lyral® yet, and that was the idea of the Beyond Muguet study. We have an exceptional set of molecules to build muguet accords,” explains Julien Firmenich, Vice President Sales, Ingredients, Perfumery.

Beyond Muguet is a brand-new creative approach around muguet notes. The approach is not one solution but a series of 7 molecules, including 3 captives, combined to deliver new emotions and new territories for fresh and transparent floral notes. The Firmenich ingredients series pushes the boundaries of creativity and offers a new angle to tell the story of transparent floral notes.

Using the visual representations of Lilial® and Lyral® as a reference, the Beyond Muguet combinations were noted on the same scale, creating a visual that perfectly echoes each one’s corresponding odour.”

Balestra continues, “Muguet is a particularly versatile note. You can make it fresh, transparent, green or caring – it’s something that can adapt depending on how and where it is being used. Now we are in a situation where we find these muguet facets everywhere, whether as small or prominent facets of the fragrance, and that’s why they are so important.”

Lily of the Valley is complex with many different nuances, such as rosy, powdery, aldehydic facets. Both Beyond LILYFLORE® and Beyond HIVERNAL® NEO provide the building blocks for exploring new muguet fragrances… and beyond!