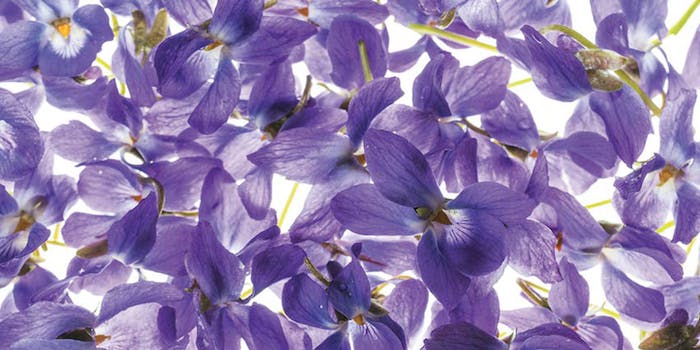 As one of the most popular and expensive oils of the 19th century, violet oil’s compounds could be isolated into three major ionones. It was found that depending on the synthetic route, mixtures of the ionones in different ratios were formed, each of which had unique fragrance profiles.

A century ago, perfumers practiced their craft behind a cloak of mystery. The components of perfumes were understood to be derived from natural sources, but neither the structures of individual fragrance compounds nor the ratio in which particular fragrance compounds were blended to create perfume compositions was readily discoverable to consumers or competitors.

All has changed with the development of sophisticated analytical techniques such as gas chromatography (GC), Mass Spectrometry (MS) and Nuclear Magnetic Resonance (NMR). Now, using these techniques, it is possible to “reverse engineer” the fragrance compounds in any perfume. Perfume compositions are thus easy targets for counterfeiters and other market interlopers. The counterfeiter need only analyze the branded perfume and obtain the known components to produce the fake product.

Requirements for Obtaining a Patent

A patent is also required to teach the public how to make and use the invention. A non-naturally occurring fragrance patent should disclose the process for how the desired compounds are made, example compositions containing the compounds, and how the compounds and compositions were tested. A patent’s 20 years of exclusivity is effectively granted in exchange for the invention disclosure, which is considered to be in the public interest.

How do chemists approach the problem of making compounds that are not naturally occurring but that may (or may not) possess similar characteristics? The development process follows a general pattern that has been used by chemists for many years. First, someone finds a chemical compound with desirable properties. Then, chemists devise efficient methods for obtaining the compound with high purity from the natural source. Next, they determine the best way to make the compound, first in small quantities the laboratory and then in large quantities in production plants.

Chemists also search for new compounds that have the same desirable properties. One strategy for finding new compounds is to test or “screen” hundreds of thousands of known compounds contained in “chemical libraries” for the desired property. Many chemical companies maintain their own chemical libraries for this purpose. Screening libraries may also be available from third party vendors. Compounds that are flagged during the screening process are then used as chemical “leads” for structural optimization. The chemist will tinker with the structure of the lead compound until discovering an “optimized” chemical analog with the desired property and the best profile for commercial use.

The Search for Non-Naturally Occurring Ionones

The search for non-naturally occurring compounds that are similar in structure or fragrance profile to the ionones illustrates the process of innovation in the fragrance industry.

One of the most expensive raw materials used in perfumes in the 19th century was violet oil. The high cost of violet oil is partially attributed to the low yield of oil from violet flowers. The root of iris flowers (“orris root”) was often used as a substitute for violet oil, since orris root was cheaper and had an odor similar to that of violet oil. The major constituents of violet oil were subsequently identified as compounds called “ionones.” The common ionones are alpha-ionone (woody, violet sweet) and beta-ionone (woody, violet). An additional isomer, gamma-ionone (with a natural violet, soft, floral odor), also exists in nature and is the most scarce. The structures of these compounds are shown in F-1, F-2 and F-3.

The ionones are present in plants as mixtures with other compounds. Isolating ionones from plants is not a trivial undertaking, and the separation of one ionone from another remains challenging even today. The difficulty in isolating the natural ionones spurred the development of synthetic routes that could be performed in a laboratory and even on an industrial scale. Each synthetic route produced mixtures of the ionones in different ratios, and chemists discovered that each mixture had a unique fragrance profile.

1. Structural similarity is not a necessary requirement for a non-naturally occurring compound to have the same ionone fragrance profile.

In U.S. Patent No. 9,517,992, owned by Givaudan, the inventors sought to develop a more plentiful and cheaper substitute for Orris Absolute, the essential oil of orris root. The inventors noted that the essential oil of orris may be the most expensive perfumery raw material still in use. The components of the oil were found to include alpha irone (F-5), beta irone (F-6), and gamma irone (F-7)—compounds that have very similar structures and fragrance profiles to the ionones depicted above.

Preparing alpha irone, beta irone and gamma irone selectively via an industrial process rather than by extraction is not feasible and would not provide a cost savings. The inventors found that the acyclic compounds shown below had “characteristic orris facets.” Although the compounds are not cyclic like the ionones or irones described above, they possess many common atoms, represented by the bolded bonds in F-8 and F-9.

In U.S. Patent No. 8,911,716, owned by Firmenich, the inventors discovered several compounds that looked like ionones or irones but that had a saffron odor, as opposed to the woody/violet odor of the naturally occurring compounds (see F-10 and F-11).

4. Chemists can modify chemical compounds by adding a “protecting” group. The resulting compounds may have favorable fragrance profiles.

The acetal functional group can also be found in fragrance compounds. The non-naturally occurring fragrance compounds claimed in U.S. Patent No. 8,236,749, owned by Firmenich, contain an acetal functional group. The structure of the corresponding aldehyde is provided for comparison in F-14. The acetals have distinct fragrance profiles, ranging from woody to earthy to camphoraceous to minty.

5. Other derivatives of non-naturally occurring compounds may have favorable fragrance profiles.