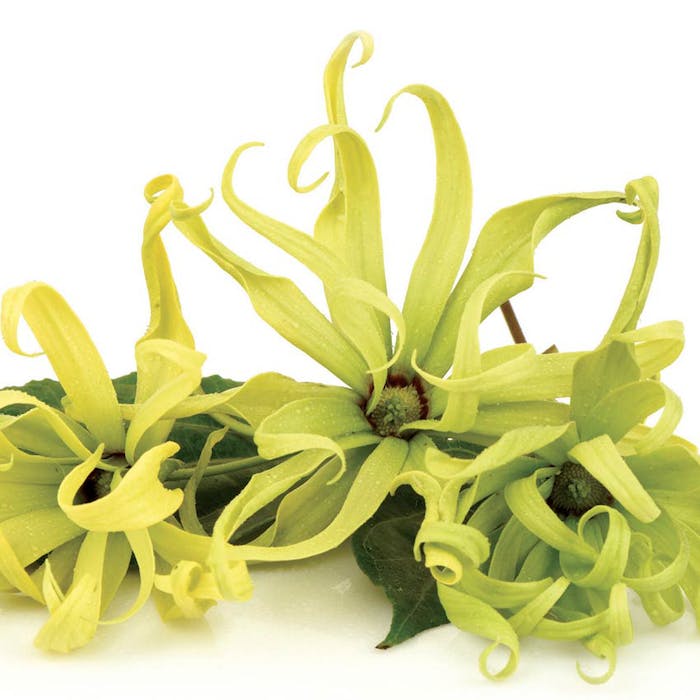 A survey of the literature reveals that Jacobsen et al. (1987) determined that α-copaene, which was found as a constituent in ylang ylang oil, existed exclusively in the levorotatory form.

Sacchetti et al. (2005) obtained a number of commercial essential oils in Italy that were screened for their antioxidant, anti-radical and antimicrobial activities. Among the oils screened was cananga oil. Its composition was determined by GC-FID and GC/MS to be as follows:

It should be noted that the occurrence of dihydrolinalool in this oil indicates that the commercial oil was adulterated with synthetic linalool.

Kaiser (2006) reported that cananga flowers are grown for ceremonial purposes and cananga oil production by special communities in the villages of Purwodadi and Serengat near Malang (Eastern Java). The trees are grown using a mixed culture system where they are integrated with fruit trees and cocoa and coffee shrubs. The headspace analysis of the living flowers of C. odorata flowers obtained from Lakekamu Basin, Papua New Guinea was determined by Kaiser (2006).The constituents characterized in this headspace were as follows:

Furthermore Kaisar noted that this unique cananga possessed a lower level p-methyl anisole than found in other cananga flower selections. In addition, comparatively high levels of jasmone and methyl cis-(Z)-jasmonate were also found. He remarked that although this was the first time that these jasmonoid compounds had been found as constituents, their presence in the flower fragrance gave it an appealing softness.

As part of a screening program for the antioxidant activity of commercially available essential oils, Wei and Shibamoto (2007) determined that the major constituents found in a sample of ylang ylang oil were:

Benini et al. (2010) reviewed the production of ylang ylang oil from the Indian ocean islands. They also reported the AFNOR (2005) data for the various quality oils, the data of which can be seen summarized in T-2.

Ranade (2011) reported that the main constituents of ylang ylang oil Extra were as follows:

Benini et al. (2012a) collected (between 7–8 am) mature ylang ylang flowers in July, August and September from trees growing on Grand Comore, Mayotte, Nossi Bé and Ambanja. After subjecting separate hydrodistillations for each flower source, the resultant oils were collected in four separate fractions. These fractions were analyzed using GC-FID and GC/MS. The combined results obtained results obtained from the numerous analyses are shown in T-3 through T-6.

The data presentation in T-3 and T-4 are presented in two decimal places and have been included in the tables if a single constituent was found in an amount of 0.05% or greater. This was done because of the variations observed between the various fractions.

The compositions of the oils produced by hydrodistillations for hrs from fresh mature. ylang ylang flowers collected from five plantations (Adawa, Ifoundihé, Selea, Moubadjou and Mitsamiouli) in Grande Comore, four plantations (Bouyouni, Mavingoni, Vahibé and Dzoumogné) in Mayotte and two plantations (Tsaratarié and Amboimena) in Madagascar were examined by Benini et al. (2004) using GC-FID and GC/MS. The author’s determined that variations in the composition within plantations and between islands however there was not a genetic differentiation that could support the variation.

Brokl et al.(2013) collected mature ylang ylang flowers from seven different trees growing in the vicinity of Mavigoni (Mayotte). The pooled flowers were hydrodistilled for 8hr and four separate fractions: fraction 1 (after 25min), fraction 2 (after 1hr), fraction 3 (after 3hr) and fraction 4 (after 8hr.). Fractions 1 and 4 were subjected to GC × GC–TOFMS (Time of Flight Mass Spectrometry) and the findings of this study can be seen in T-7.

Qin et al. (2014) examined the change in chemical composition of the oils produced from C. odorata flowers from their bud stage through the full flowering stage to the wilted flower stage and the dried flower stage using headspace SPME-GC/MS. Unfortunately, the analyses did not make sense as the normally encountered major constituents of the early ylang ylang oil fractions, such as p-cresyl methyl ether, linaool and benzyl acetate, were either not identified or were found in miniscule amounts. Also, the authors reported that they characterized numerous constituents that were obviously incorrect computer-assisted identifications. This reviewer questions not only the identifications but also the repeatability of the analytical technique used. Nevertheless, a summary of a selected set of results can be seen in T-8. These results are presented so that in the future if such a study is repeated a comparison with the study of Qin et al. can be made.

The 47 million Swiss franc investment in the new plant will provide 20,000 metric tons of additional capacity to serve customers in Turkey, the Middle East and ‘Stans’ countries.
Nov 5th, 2021

For the second year in a row, Symrise has been recognized with the Sustainability Heroes Award.
Nov 4th, 2021