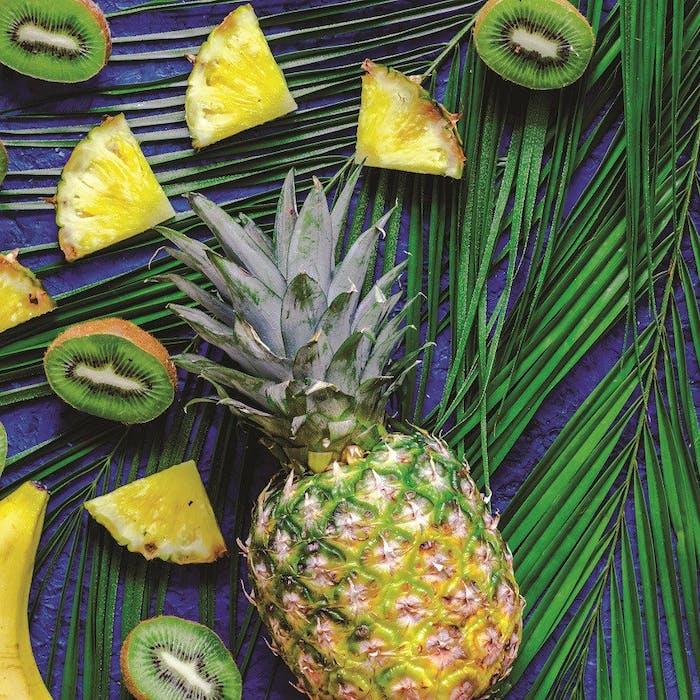 One of the first fruits of the creative revolution driven by the use of gas chromatography was a very well constructed strawberry flavor from Esrolko, a Zurich Swiss flavor company that became the core of Givaudan’s flavor business. The heart of this flavor was the fresh green top note derived simply from cis-3-hexenol. For other flavor companies, the challenge was clear – how to beat this newcomer?

Analysis of strawberries offered one promising option. In nature, the green top note in fresh strawberries is derived from a hugely complex mixture of chemicals. cis-3-Hexenol clearly played a big part. Nevertheless, quite a number of cis-3-hexenyl esters were also important (along with many chemicals not derived from cis-3-hexenol). One good approach was to try to replicate the complexity of nature and add pretty much everything found in analyses. This resulted in an obvious increase in authenticity, but unfortunately, it also carried with it a loss of impact caused by over complexity. How to strike the best compromise between simplicity and complexity? Everybody has favorites, but in my experience, one of the most broadly attractive cis-3-hexenyl esters is cis-3-hexenyl 2-methyl butyrate (FEMA# 3497, CAS# 53398-85-9). This rich and powerful green note has a significant fruity component and pleasantly subtle hints of apples and tropical fruits.

Banana: cis-3-Hexenyl acetate might seem to be the most obvious choice for a dominant green note in banana flavors, but cis-3-hexenyl 2-methyl butyrate is a better fit to the fruity profile. A good starting point is 100 ppm for ripe banana flavors.

Durian: Durian flavors are an unlikely marriage between pungent sulfur top notes and a sweet creamy foundation, with very little obvious place for green notes. Despite this, the addition of as little as five ppm of this ingredient lifts the character subtly.

Guava: For ripe, fresh guava flavors, 400 ppm of cis-3-hexenyl 2-methyl butyrate is highly effective. It can either be used alone or in conjunction with other green notes.

Kiwi: The green notes in kiwi flavors are often dominated by cis-3-hexenol and trans-2-hexenal but, even here, an addition of around 300 ppm of this ingredient adds welcome depth, realism and complexity.

Mango: Both the parent alcohol and the acetate should play the dominant roles in a good mango flavor, but 100 ppm of cis-3-hexenyl 2-methyl butyrate adds depth and useful heat stability.

Passionfruit: cis-3-Hexenyl 2-methyl butyrate has an interesting tropical note and combines very well with the even more obviously tropical cis-3-hexenyl hexanoate in passionfruit flavors. A good place to start is 100 ppm.

Pineapple: Pineapple flavors vary in character from fresh to processed and the ideal addition of this ingredients is very dependent on the profile. A good level in fresh pineapple flavors is 100 ppm.

Blackberry and Raspberry: cis-3-Hexenyl 2-methyl butyrate forms a useful component, along with cis-3-hexenol, of the green note of both blackberry and raspberry flavors. A good starting level is 50 ppm.

Blackcurrant: In most applications, the fresh, green characters of blackcurrant flavors are rather subdued and levels of this ingredient as low as 10 ppm are all that is required to be effective.

Strawberry: Of all the range of berry flavors, strawberry is the sweet spot where cis-3-hexenyl 2-methyl butyrate really comes into its own. In my opinion, 200 ppm is an ideal starting level but much higher levels can be used to give unique effects.

Apple: The rather subtle apple note of cis-3-hexenyl 2-methyl butyrate makes this green note especially suitable for all apple flavors. For red apple flavors, 300 ppm is a great level, but higher levels are very effective if a green apple character is required.

Apricot and Peach: Fresh apricot and peach flavors are well served by 100 ppm of this ingredient, blending well with the parent alcohol and the acetate.

Grape: Grape flavors vary immensely in style. cis-3-Hexenyl 2-methyl butyrate is most at home in fresh white grape characters where 100 ppm is optimal. Lower levels can be used in Concord and other grape styles.

Pomegranate: Pomegranate flavors currently have a certain cachet, even though the character is a little elusive. A level of 150 ppm of this ingredient adds freshness to the rather fruity overall character.

Rhubarb: Rhubarb is much more of a Northern European specialty than a global taste. cis-3-Hexenyl 2-methyl butyrate adds welcome freshness at 300 ppm and avoids an overly “stewed” character.

Butter: Only the merest hint of green character gives freshness to butter flavors and five ppm of this ingredient is easily enough.

Elderflower: Traditional elderflower drinks and other products are made using fresh flowers and a small addition of cis-3-hexenyl 2-methyl butyrate, around 15 ppm, recreates this freshly picked “hedgerow” effect.

Oregano and Sage: In many fresh herb flavors, 15 ppm works well and is particularly effective with oregano and sage.

Peppers, Bell and Jalapeño: Red bell pepper flavors are enhanced by levels of cis-3-hexenyl 2-methyl butyrate around 30 ppm, but green bell pepper and jalapeño flavors can tolerate higher levels, 50 ppm and beyond, especially when methoxy pyrazines are also used.

Peppermint and Spearmint: Both types of mint are significantly enhanced by moderate additions of cis-3-hexenyl 2-methyl butyrate. Optimum levels of addition are similar but perhaps with a small differential: 80 ppm in peppermint flavors and 100 ppm in spearmint flavors. Spearmint flavors that aim to give a fresh garden mint character should use altogether higher levels, 300 ppm and beyond.

Tea, Black and Green: The beneficial effect of this green note in green tea flavors is self-evident and I think a moderate addition, around 100 ppm, works best. Less obviously, there is also a significant effect in black tea flavors but at a much lower level, around 10 ppm.

Tomato, Fresh: cis-3-Hexenol is way more important than any of its esters in fresh tomato flavors, but the addition of 100 ppm of cis-3-hexenyl 2-methyl butyrate enhances freshness, adds depth and softens some of the harsh green character of the thiazoles.